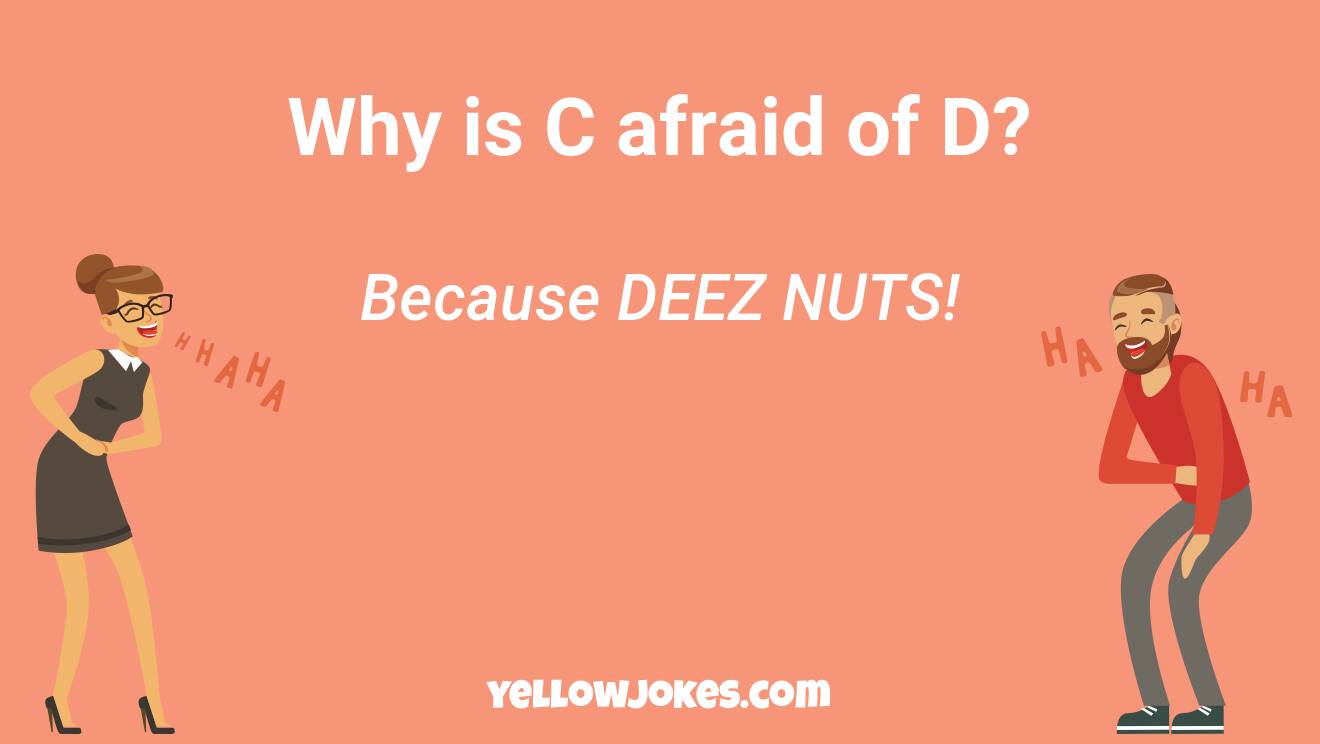 My nephew got me with this one He said "they've been together for 15 years." When I asked who, he said "DEEZ NUTSS"

Knock Knock Who's there?

Do you like Wendy's? When deez nuts are in your mouth!

The biggest joke of 2015.. When you have Donald Trump, Hilary Clinton, and Deez Nuts running for President.

something came in the mail today deez nuts

What is the deez nuts guy’s favorite band? ACDeez nuts!

When I almost snapped after I heard the same joke over and over, I've found out what rhymes with orange ! Deez nuts ! Ha, got him !

Easter is a Tough Time of Year for Me

Easter has been a hard time for me ever since Grandpa past. We never really got along all that well for most of my life. He was as tough as the land he farmed, and I'm as soft as his favorite Easter treat - Peeps.

For those unaware, they're small marshmellow birds, usually brightly coloured and they come in packs of 5. A deep love for those candy avian delights were just about all that him and I had in common.

About 5 years ago he was diagnosed with Alzheimer's. It wasn't too bad up until it had taken just enough hold for him to no longer be able to work. Him and Grandma were relocated to the retirement home nearby. Unfortunately, the move was even harder on her than it was on him. I guess the sudden change in environment was too much for her, as she'd already been battling type 1 diabetes since her youth and blindness for the previous decade or so. The predictability and steadiness of the farm life was more or less what kept her alive. She passed away about a year after the move.

Understandably, my grandpa wasn't doing so well after that. His mind was fading, his better half was gone, and he was no longer on the rough land that he worked hard in to sustainable fruitfulness. He was incontinent, moody, and flashing between reality and God knows what.

He became kinder through all of this, as a delirious man in constant suffering would. He didn't know who was around him most of the time, but he knew that being kind to others will often grant kindness in return. So he did just that, hoping the kindness of others would ease his pain. It was through this that we began to develop a shallow, yet genuine bond.

The last time I saw him, he was on a brief dismissal from the hospital as he'd been having a slew of minor heart attacks for about 6 months. It was Easter, and the whole family was back on the family farm which my uncle had taken over. Grandpa couldn't remember or recognize most of us anymore - but he remembered Easter, so he remembered Peeps. Given that I was the only one in the family who consistently went as buckwild for Peeps as he did this time of year, he remembered me.

He was joyous to be back on the farm, so he seemed a little more present than usual. He was coming in and out, but I managed to catch him at a moment of clarity as he sat in his old hand-made rocking chair in the rumpus room.

"What?" he asked, being hard of hearing.

"Thanks, Grandpa. How's the heart doing?"

"I think I've had an attack or two, but I'm not sure. It hasn't killed me quite yet."

We shared a brief chuckle, and a moment of awkwardness took hold. I never did like his humor. He broke the silence.

"Yeah, I do." I was happy to hear he remembered something about me despite forgetting most of my siblings and cousins' faces.

"What say you go and sneak a couple of 'em for us? Grandma should have them hidden in the pantry. Careful though, you know she don't like us having dessert before supper," he proposed, slipping me a wink.

It dawned on me that he didn't remember Grandma's passing. I figured that I wasn't going to put him through the news again, not on Easter. "Okay," I reassured him, putting on a smile. "Sounds like a deal. I'll be right back."

As I searched the kitchen I realized that this was the first Easter without Grandma being there - no one had thought to pick up the Peeps. She did most of the prep and cooking and shopping for Easter dinner since any of us could remember, and picking them up must have been one of the few things not taken care of. My heart sank - I knew this would likely be the last time I could share a Peep with grandpa, and definitely the last time I could somehow get a bit closer to a man who was trying his best to connect with me after being rather indifferent to me my whole life.

I told my Dad the situation, and he agreed to drive me to town to search for those heavenly peeps. We searched the grocery store, the gas stations, even the drug and convenience stores. Alas, the whole damn town was out of Peeps. I realized my one sense of connection with my grandfather outside of genealogy was about as ubiquitous with others as potatoes and gravy. Heartbroken, we drove home. I was doing mental gymnastics on how to tell a man who can't even remember his own wife passing that he couldn't have his favourite seasonal treat, because it was her that remembered to get them for him every year.

When we returned, there was an ambulance parked outside of the house. Our relatives were circled around the porch, and Grandpa was being wheeled out on a stretcher. My father quickly hopped out and ran towards him. I stayed in the truck, frozen.

I saw the EMTs park my grandpa in front of the back doors to the ambulance. I supposed that Grandpa asked them to wait so that he could speak to Dad. After a brief exchange, I saw them share a hug. It was an embrace that lasted much longer than I'd known either of them to give anybody. This was it, I thought.

All three of us knew that Grandpa wouldn't be coming back for dessert.

It was then that Dad looked over at me, and waved me to come over. Grandpa wanted to tell me something.

As I approached, he looked at me with a clarity that I hadn't seen from him in years.

"What?" he asked, still being hard of hearing.

"No!" I said louder, frustratingly. It quickly hurt me to have raised my voice at a dying old man.

"Oh, it's alright, Anon. Your mother told me where you snuck off too. I suppose the whole town is out of Peeps, being Easter."

I was taken aback by how present he seemed. Maybe it was his looming departure from this life that brought him such clear-headedness. I wasn't gonna think about it right then.

"You know, Anon... if the whole town is out of peeps, then at least..." He coughed a little bit, breathing in heavily.

"Then... what, Grandpa?" I pulled closer, waiting for those final words. After a lifetime of seemingly irrevocable difference between us, I felt that a nugget of intergenerational wisdom, or familial affection, or something grand was about to be said from a grandfather to his grandson at the last possible moment to do so.

My ear was close enough to his dried lips to feel his breath now, and he whispered: