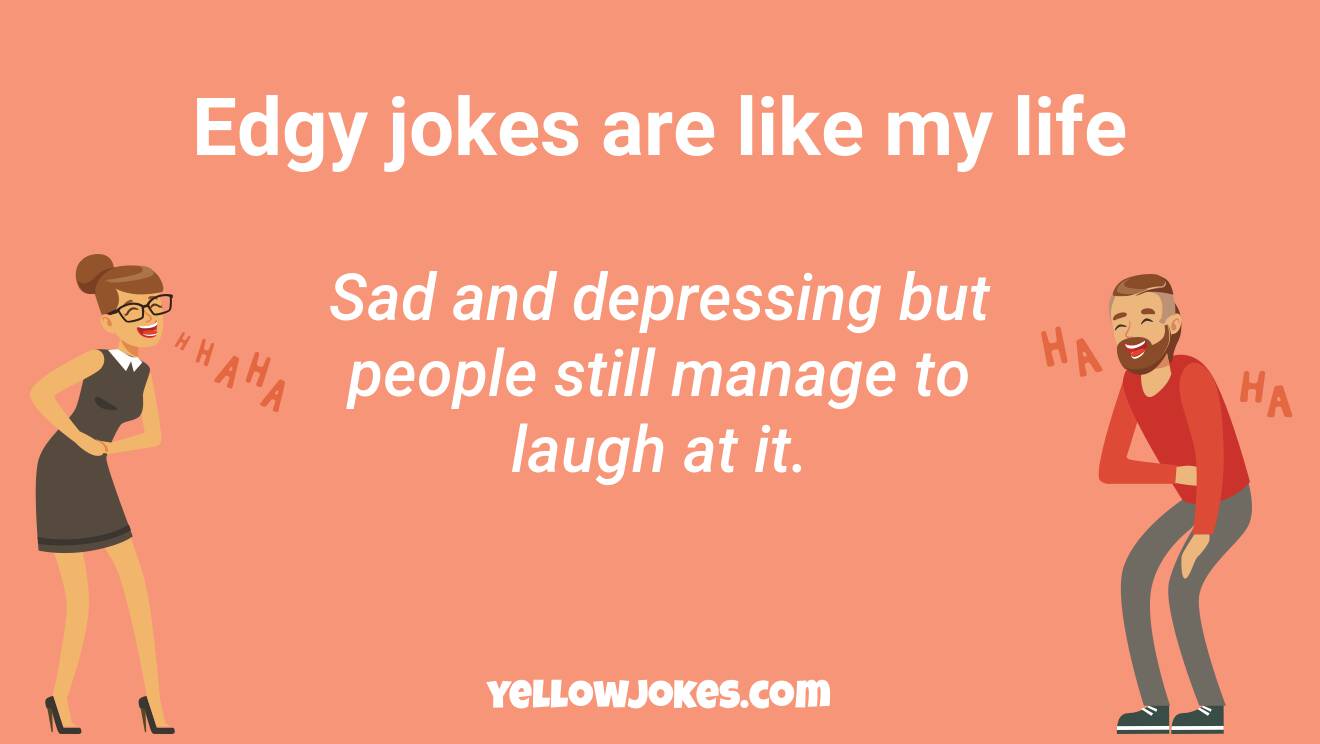 I, someday, want to make an edgy football joke on this sub. It's my goal post.

I don't like dodecahedrons They are too edgy for me.

I matched with this guy on Tinder. He said he wasn’t like your average single Pringle – he was like a Dorito, edgy and spicy. I hooked up with him. He definitely wasn’t plain round.

Why did the edgy teenager lock himself in the freezer ? He taught it was cool.

I'm like Microsoft Edge Nobody likes me, but I'm edgy

Where do edgy teens come from? Angsterdam.

Why did the square breakup with the circle? She wasn't edgy enough!

My girlfriend says she's going to a club called "The Cube" tonight... Sounds pretty edgy to me.

Do you know why I hate hexagons more than squares? Because hexagons are more edgy

Want to hear a quality joke about knives? On second thought, I can't tell it. It's too edgy

Want to hear my joke about cliffs? It’s too edgy

I was going to make a joke about the Samsung S8... ...but its a little bit edgy

What's edgy and sorry about it? An emo Canadian

What do edgy teenagers and energy companies have in common? They both want more Jules.

Why do emos like razors... Because they are as edgy as them

you know why I dont trust little knives? they are little edgy

My favourite shape is an iscosehedron Yeah, I'm that edgy

Edgy title The oldest computer can be traced back to Adam and Eve. It was an apple but with extremely limited memory. Just 1 byte. And then everything just crashed.

What do geologists and edgy teens have in common? They both like rock.

I don't really appreciate jokes about Microsoft's new browser. They're too Edgy for me.

In the piece, there’s about a 20 min long passage during which the double basses have nothing to do. Rather than sit around the whole time looking stupid, some bassists decided to sneak offstage and go to the tavern next door for a quick drink. After slamming several beers in quick succession (as double bassists are pone to do), one of them looked at his watch, “Hey! We need to get back!”

“No need to panic,” said a fellow bassist. “I thought we might need some extra time, so I tied the last few pages of the conductor’s score together with string. I’ll take him a few minutes to get it untangled.”

A few minutes later they staggered back to the concert hall and took their places in the orchestra. About this time, a member of the audience noticed the conductor seemed a bit edgy and said as much to her date.

“Well, of course,” said her date. “Don’t you see? It’s the bottom of the Ninth, the score is tied, and the bassists are loaded.”
Share:

Help! Performing in front of a deaf audience, and need an appropriate opening joke or two (plus my favorite three little pig joke)

Tomorrow I'm conducting a charity benefit for a large state wide deaf education foundation. I'll be in front of ~500 people talking. I Want at least one slightly edgy jokes that would cater to this sort of rich (and largely deaf) audience.

Date: I like to live life on the edge
Me:*trying to impress her* I put my foot infront of the yellow line at train stations.
Date: *cleary impressed and distracted by my edgy lifestyle *
Me: *kicks her chair lightly*
Date: *falls of chair* that's so hot, but why did you kick my of my chair?
Me: to teach you a lesson on why you should never live your life on the edge.
Share: