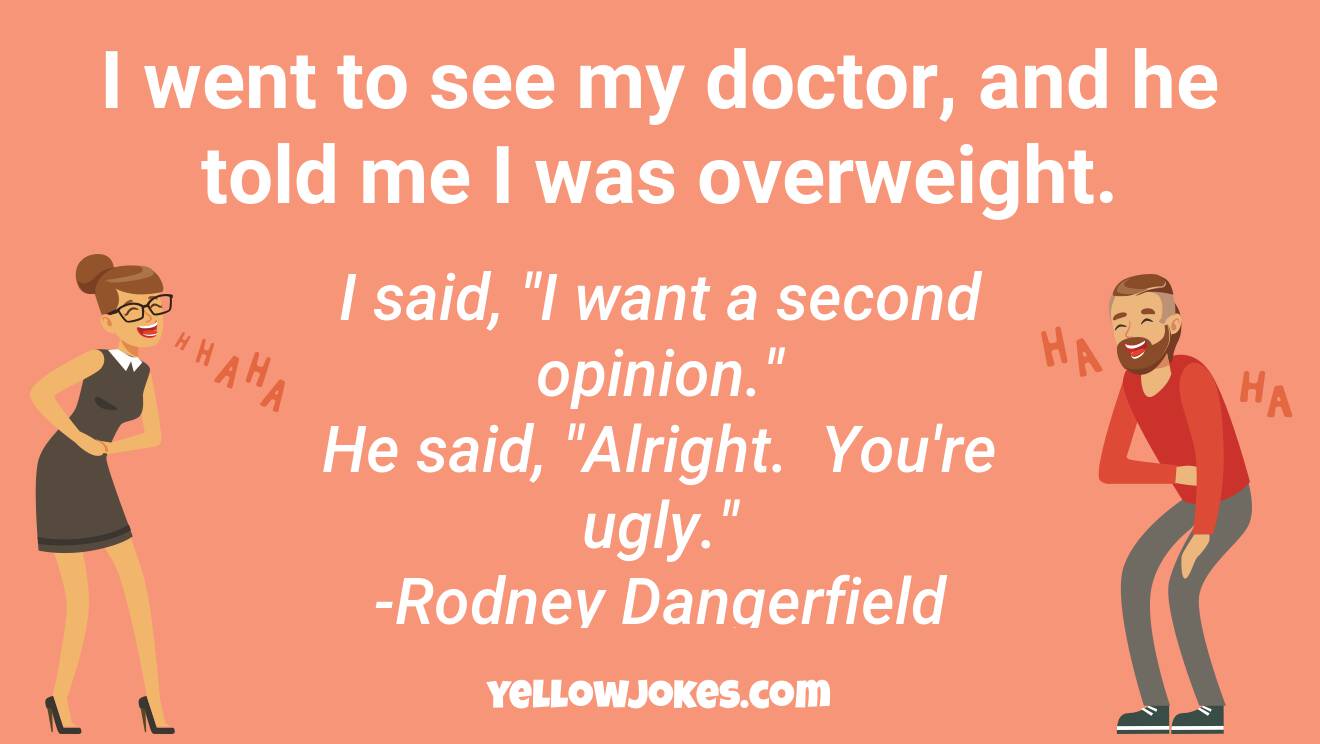 My wife has to be the worst cook ever. In my house we pray after we eat.

I asked my wife if shed like me to be in the room with her when she delivered our child She said "Why? It's not like you were in the room when she was concieved.

My psychiatrist told me I was crazy and I told him I wanted another opinion.. He said fine, you’re ugly too

Rodney Dangerfield joke I'll tell ya, my wife and I, we don't think alike.

I come from a small town. I come from a town where the population never changes. Everytime a kid is born, some guy leaves town.

You could tell my parents hated me... My bath toys were a toaster and a radio. (RIP Rodney Dangerfield)

I asked the barman "bring me a double" He came back with a guy that looks just like me.

Happy Couple “My wife and I were happy for 20 years. Then we met.”
Rodney Dangerfield

What a kid I got I told him about the birds and the bees and he told me about the butcher and my wife.

I found out my wife was having an affair with the butcher. I walked into his shop and said to him, "Who told you you could sleep with my wife?"

I only get laid because of who I am... A rapist!

I went over, nobody was home.

I found out my wife was having an affair with the butcher. I went down to the butcher shop and said to him, "Who said you could sleep with MY wife?"

My childhood was tough. I'm so ugly, that when I was a baby my mother refused to breastfeed me.

She told me she just liked me as a friend.

When I was little I got lost at the fair. I got a policeman to help me look for my parents. I asked him if we would find my parents. He said I don't know kid.... there's so many places they could hide.

I know my wife cheats on me, when I come home our parrot says: “quick!, out the window!” Rodney Dangerfield

Rodney Dangerfield Well with girls I don't get no respect. I had a blind date. I waited two hours on the corner. A girl walked by. I said "Are you Louise?" She said, "Are you Rodney?" I said, "Yeah." She said, "I'm not Louise."

When I was born I was so ugly... the doctor slapped my mother.

My mother never breast fed me... she told me she only liked me as a friend. ~ Rodney Dangerfield

This is how good my dog is, LOL. I tell ya, my dog is lazy. He don’t chase cars. He sits on the curb and takes down license plate numbers.
—Rodney Dangerfield

What do you get when you are the daughter of Rodney Dangerfield and Aretha Franklin? No R-E-S-P-E-C-T.

Well I finally solved my drinking problem, I joined Alcoholics Anonymous Yeah I still drink, I just use a different name, that's all

(Courtesy of Rodney Dangerfield on The Johnny Carson Show)

I Was So Poor in my neighborhood the rainbow was in black and white!

I got a phone call from a girl saying "Come over! No one's home!" I went over and no one was home

I got an incredible price on a Rodney Dangerfield VHS tape Blockbuster was having a Back to School sale!

I went window shopping yesterday with my wife.... We bought three windows.

For gamers of a certain age Why did Rodney Dangerfield always make such unbalanced RPG characters?


He never got no respec.

Best if read with a Rodney Dangerfield impression.

I got up this morning, put on a shirt and a button fell off. I picked up my briefcase and the handle came off. Finally leave the house for work and the doorknob comes loose and just breaks off.

I'm afraid to go to the bathroom..