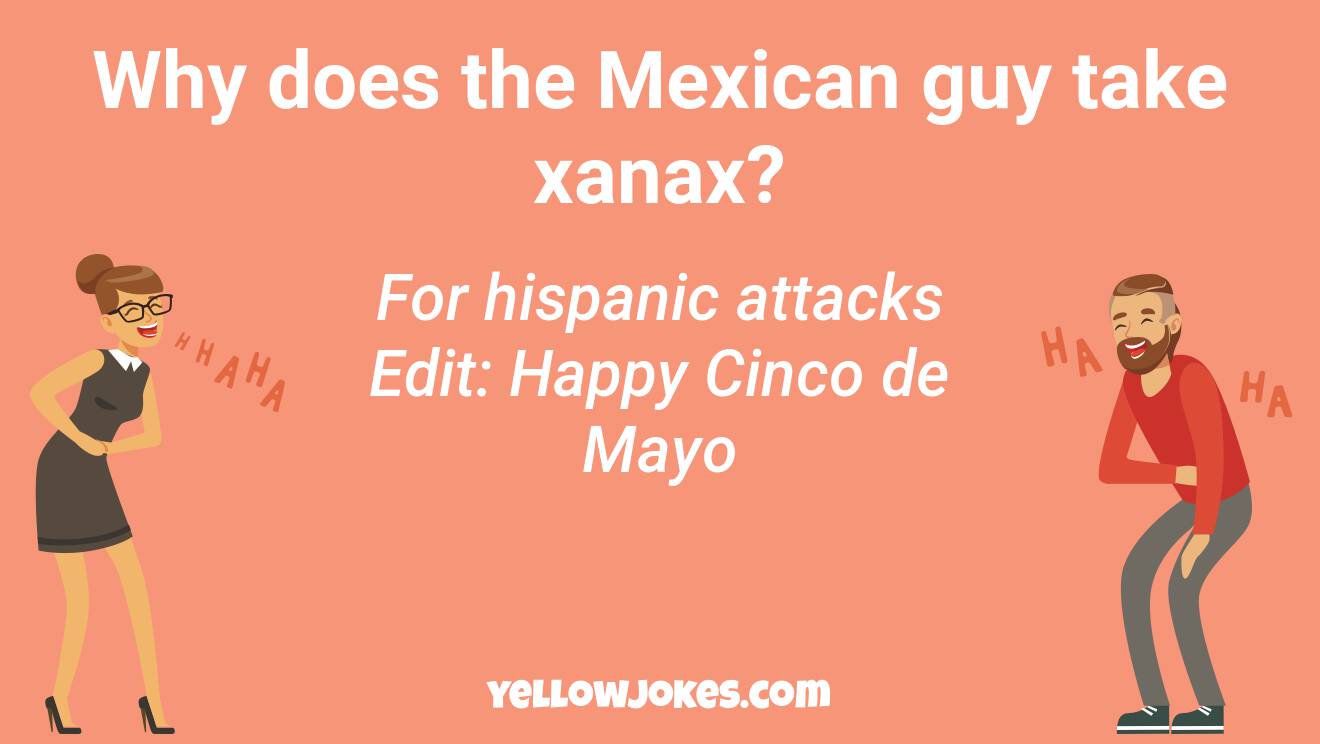 I hate Cinco De Mayo! -Said no Juan ever

What's the only major difference between Cinco de Mayo and Saint Patrick's day? Nobody wants to pretend to be a Mexican for a day.

In honor of Cinco De Mayo - Why do Mexicans cross the border two at a time? Because the signs say "No Trespassing".

Happy Cinco De Mayo. A Mexican magician says he will disappear on the count of three He says "uno, dos..." then disappears without a tres.

What's the difference between St. Patrick's Day and Cinco De Mayo? On Cinco De Mayo, not everybody pretends to be Mexican.

What's the difference between Cinco de Mayo and St. Patricks Day? No one pretends to be mexican.

Yesterday was Star Wars Day (May The Fourth be with you). Today is Cinco de Mayo. Combine the two and tomorrow is... Revenge of the Sixth

This year will be the first Cinco de Mayo ... When Americans try to avoid getting a case of Corona.

What did Conor McGregor say when it rained on Cinco De Mayo? " I don't like Mayweather!"

Since it's Cinco De Mayo, I think i'm gonna eat a little mexican tonight! And after that, I'll have dinner!

Why did they call it Cinco de Mayo? Because only white people celebrate it.

What do you say if you spill mayonnaise in the kitchen sink? Happy Cinco de Mayo!

What do you read on cinco de mayo? "Tequila Mockingbird"

What's the difference between St Patrick's Day and Cinco De Mayo? Everyone is proud to be Irish on St Paddy's day

I'm dreading the coming Cinco De Mayo. There will potentially be millions of new cases of Corona in North America alone.

Trump: How do you know if you live in a good neighborhood? When it is Cinco de Mayo and you don't see any flags...

Donald Trump goes to a fortune teller and asks "When am I going to die?"

The fortune teller replies: "you will die on a major Mexican holiday."

The fortune teller replies: "ANY day you die, Donald, will be a major Mexican holiday!"
Share:

The largest shipment of Mayonnaise ever.

Today most of the world's import/export happens via airplane AND ships by sea. Due to most of the world's Mayonnaise being produced in England up until 1925, the product was exported via business and commercial ships. The largest shipment ever was put on the Titanic, bound for the first delivery to Mexico. Because of the extreme amount of loss, and the heartbreak due to the anticipation for the product a national day of remembrance was made, "cinco de mayo"
Share:

At the turn of the last century, Mexico was introduced to mayonnaise.

At the turn of the last century, Mexico was introduced to mayonnaise.

And they just loved it. They couldn't make mayonnaise quick enough.

Little known fact, the Titanic had a large vat of mayonnaise that was going to go to Mexico.

Now when the Titanic sunk, and the mayonnaise went with it, the Mexicans were devastated.

So devastated that they did the only logical thing they could do: make a holiday to commemorate that tragic event.

Know what they called that holiday?

(Told to me by a bus a driver)
Share:

The Titanic and mayonnaise

What a lot of people don't know about the Titanic was that it was carrying a large shipment of mayonnaise to Mexico. In fact, the Mexican people were overjoyed to be receiving this fine delicacy.

Sadly, as we all know, the Titanic tragically sank, sending its many tons of mayonnaise to the bottom of the ocean. The Mexican people were saddened by this event, and dedicated an annual event to the remembrance of the mayonnaise

Why do Mexicans mourn on Cinco de Mayo?

We’ve all heard of the sinking of the Titanic right?

The tragedy that took the lives of hundreds of passengers?

But another tragedy took place on that same ship on this same date.

Along with the souls aboard the HMS Titanic bound for New York,

She carried in her belly a massive shipment of gourmet Mayonnaise from France.

The Mayonnaise was bound for the eastern port of Tampico, Mexico.

Then, the unthinkable happened.

And while history remembers the lives lost on that fateful day,

The proud Mexican people will forever remember that day as…….

After someone asked me if Cinco de Mayo was on the 8th, I decided to provide this useful guide to US holidays

Since it's May, we'll move on to a couple of May holidays. Mother's Day and Memorial Day. These both start with the letter 'M' and so does the month of May.

As a close complement, we also have Father's Day and the Fourth of July. These both start with the letter 'F' as does the fine month of February.

There is also Veterans Day. This one is a little trickier. It starts with the letter 'V'. None of the months appear to start with the letter 'V'. But the month of November contains a 'v' and since Veteran's Day does not come at the beginning of November but somewhere in the middle, this is pretty darn close to right. Observant readers may also have noticed that Valentine's Day also starts with a 'V'.

You will probably encounter some other US holidays, but this is probably enough for today.
Share:

It's the Cinco de Mayo!

It is a little known fact that since its inception, the state of Mexico has had a voracious appetite for the condiment mayonnaise. Indeed, this desire to have mayonnaise with all meals has influenced the very economy and national psyche.

In 1858 the Mexican government struck a deal with the government of the United States to have a supply of mayonnaise delivered at once, at wholesale price, to last the entire country of Mexico for one year.

It was to be delivered by ship from the centre of mayonnaise production at the time, New York. The ship would travel down the East Coast of the US, round the Florida Keys, across the Gulf of Mexico and land on the Yucatan peninsula to be distributed.

However a great storm struck the convoy of ships carrying this mayonnaise in the middle of the Gulf, and all of them perished.

Such was the sate of national grief that the President of Mexico at the time ordered a day of national mourning that would be observed every year for time eternal. This would make everyone remember that these ships carrying mayo were sank, and to remember the national depression that remained after wards.

It would be known as the Cinco de Mayo.