I was applying for Australian citizenship and the interviewer asked, “Do you have a criminal record?” I said, “No. Is that still required?”

An Australian bin man knocks at the door of a Chinese guy And asks 'where's ya bin mate'
The guy answers 'I bin watching TV!'
The Ozzie asks 'na mate where's ya wheelie bin'
The guy hangs his head and says 'I wheelie been wanking' 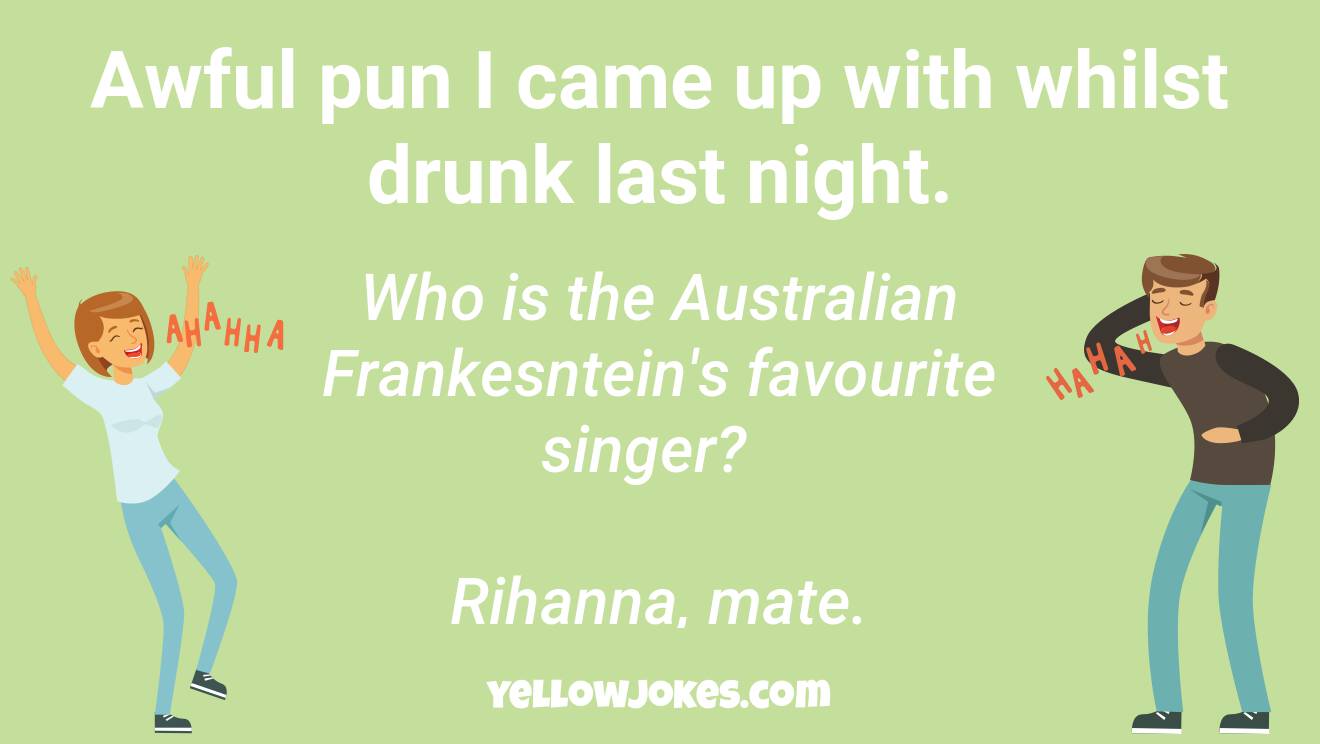 An Australian man wakes up in the hospital... ... he says, "Doctor, was I brought here to die?"
The doctor replies, "No, you were brought here yester-die"

If your workplace requires password changes every 90 days just set it to the name of the current Australian Prime minister and you should be fine.

A British man is visiting Australia for vacation. The passport lady at Australian customs asks him, "Have you been convicted of any crimes in the past?"

The Brit replies by asking, "Is it still a requirement?"

A man is applying for Australian citizenship when the clerk asks "Do you have a criminal record?" "No" the man says. "Is that still required?"

I met an Australian guy who works in IT. I asked, "Do you come from a LAN down under?"

What do you call an Australian looking after his grill? A barbie sitter

How did the Australian pay for his new chess set? Cheque, mate.

Why is it so confusing to play chess with an Australian? Because every "check" is a "check, mate!"

What's the worst thing about getting bit by a poisonous spider? That you're probably Australian.

I was playing chess with my Australian friend He moved his queen in front of my king and said "check, mate".


I replied and said, "you didn't win though?"

What's the definition of propaganda? An Australian taking a really good look at something.

A British man enters customs at an Australian airport. The officer asks
"Do you have a criminal record?"
The man looks confused and replies
"No, do I still need one?"

The worst thing about being bitten by a poisonous spider is... You're probably Australian

I was applying for Australian citizenship and the interviewer asked " Do you have any criminal history?" I said "no,is that still required?"

Have you ever heard of the Australian Kiss? It's like a French kiss, but from down under

What do you call an Australian guy who is a vegan? Vegemate.

I was applying for Australian citizenship and the interviewer asked, "Do you have a criminal record?" I said, "No. Is that still required?"

American: so you’ve come to die Australian: no, I came yesterday

What did the Australian Chess player say to the waiter? Cheque, mate!

I was at the Australian embassy and they asked "Do you have a criminal record?" "No," I answered. "Is that still required?"

An American Soldier Meets an Australian Soldier At a Warzone **American soldier:** Did you come here to die?

In all of the possible universes where Spider-Man is of another culture or race, why can’t he be Australian? Because if he got bitten by a spider in Australia he’d just die.

Why are Australian security guards so good at playing chess? They always check, mate

A british tourist arrives to the Sydney airport. The australian duty officer checks the tourist's passport before letting him enter the country, then asks:

"Have you ever been sentenced?"

"Wait, is this still a requirement?"

What did the Australian optometrist say to the client with 20/20 vision? Good eye, mate.

Why did the Australian get kicked out the toy store? For throwing shrimp on the Barbie

I met a rude Australian once I asked him if he knew of a furniture store nearby. He said "Does it look like ikea?"

A man walks into an Australian pet store, He asks the bloke behind the counter "where do you keep the kangaroos mate?"

Two Australian birds burped in my face. It didn't emus me.

What is the difference between a French kiss and an Australian kiss? ...one is down unda

A man was walking through the Australian customs... As the officer asked him "have you ever been convicted of a felony?"
"No," he answered "I didn't realize that was still a requirement."

An Australian was asked where he was having dinner from and which his favourite BTS song was. Diner, mate.

What did the Australian say after turning 8? Hiya mate!

What do they call an Australian in China? "Mate in China".

I was driving home when a group of Australian aboriginals sat in the middle of the road for 10 minutes, did a traditional dance then demanded money from everyone watching. It was highway corroboree!

What did the Australian sailor say to the tiny parasite? Aye mite.

What do you call an Australian friend who always comes over to eat vegemite? Vegimate.

What did the upbeat Australian say to the sad American? Stop living in the past.

What did the Australian say when his hangover was making it hard to pay attention to US president Eisenhauer’s speech? I’ve gotta heed Ike!

What did one Australian zombie say to the other? Good eye.

An Australian, New Zealander and a South African walk into a bar and each order a beer. Bartender: Sorry, we don’t serve Bears 🐻

What do a game of chess and an meal at an Australian restaurant have in common? You say “check mate” at the end

You know what the biggest problem with Australian Chess jokes is? They’re getting stale, mate.

How does an Australian chess player end a nice dinner at an restourant? Check mate!

What's the goal of Australian Feminism? A Mate-riarchy.

I'm sending this through internet explorer on Australian Fibre To The Node Happy New Year 2011!

Somebody needs to remember to go wake up that guy from Green Day tomorrow. nb: Im Australian, today is the 29th.

Why is harder to make toast in Australia? Because Australian bread is damper.

Why couldn't the Australian general win the war on bread? Because it was stale, mate.

What did the australian man say to his wife when she wanted a child Im afraid i cant, mate

What did the Australian say to the cyclops? Good eye mate.

A rare white koala was born yesterday in an Australian zoo. At first they thought it was an albino, but realized that it didn't meet the koalifications.

An Australian Chef was caught spitting on every dish he made. His career's saliva now.

What did the Australian optometrist say? Good eye, mate!

from the other Pub.

What do you say after finishing a game of chess at an Australian restaurant? Checkmate

Did you hear about Jason Bourne's australian counterpart Mel Bourne

Recording on an Australian tax help line.... Repeat That, Mate?

What do you say after you're done eating a meal and an Australian restaurant? Check Mate.

The worst part about being bit by a poisonous spider is... ...that you're probably Australian.

Why do Australian nymphomaniacs prefer Android? They really like rooting.

What did the chess player say after eating at an Australian restaurant? Check, mate!

An Australian horse meets his friend He says: "Hey, mate".

The other horse replies: "Thanks, I just had some".

Did you hear about the Australian guy that was dancing with my computer? He was waltzing my tilde.

What do Australian chess players say when they're finished eating at a restaurant? Check mate.

What do you call an important Australian? A significunt

What do you call an aminoacid glued to an Australian? A glutamate.

A so German, a Russian, an Irishman, a Czech, an Australian, a Canadian, an Indian, an Iranian, an Iraqi, a Mexican, a Scot, a Kenyan, a Brazillian, a Hatian, and an American all walk up to a club... The bouncer says "I'm sorry, I can't let you in without a Thai."

Why can't Australian's make sourdough bread? Because they've got no culture!

Australian joke I just heard An Australian kiss is like a French kiss only it's... down under.