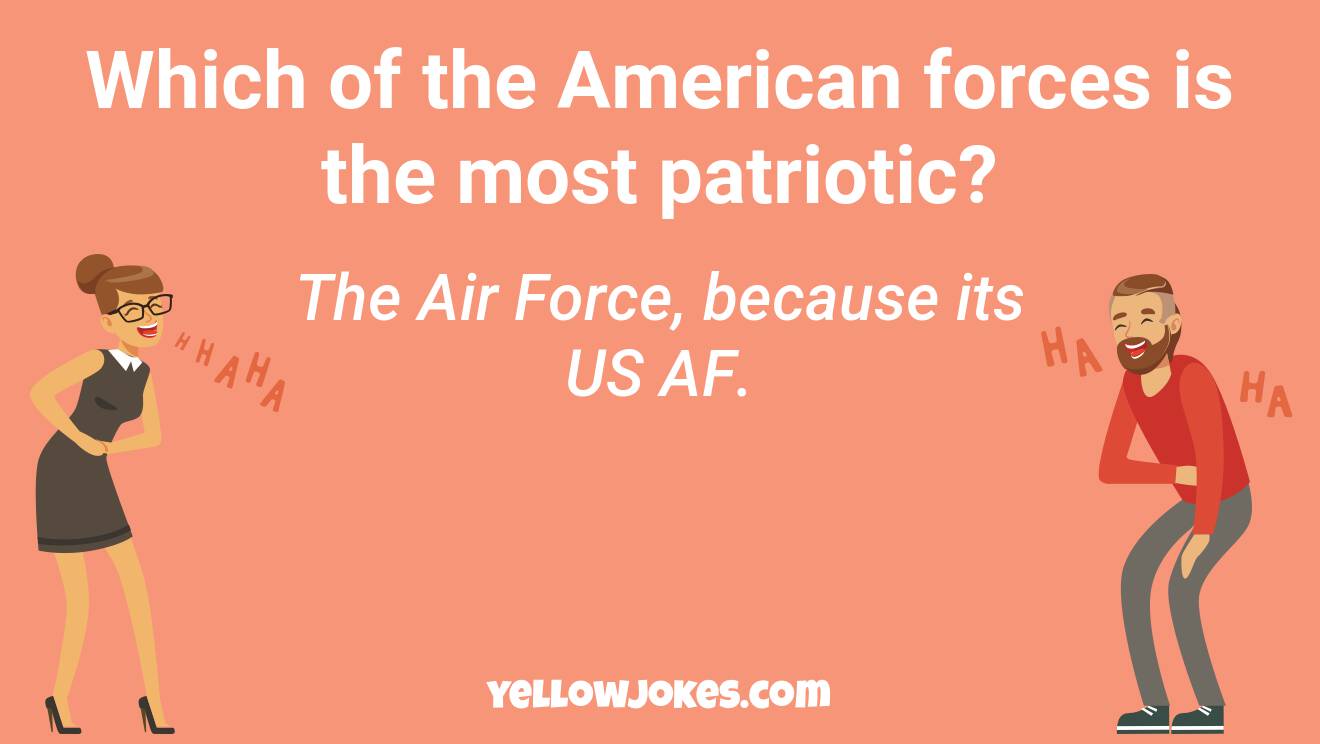 What`s the difference between a Doctors Without Borders hospital and ISIS? How would I know, I`m just a US Air Force Operator.

Why does the north Korean navy have glass bottom boats? So they can see their air Force.

What's the most american US military branch? the Air Force. They're USAF.

A soldier finds a scorpion in his tent... In the Marines, he kills the scorpion.

In the Army, he calls his CO and reports the presence of the scorpion.

In the Air Force, he calls the front desk and asks why there's a tent in his room.

Why does the Mexican Air Force stress out Donald Trump? Bc he can’t stand the sound of twenty Juan pilots.

What do you call a deer that’s enlisted in the Air Force? A bombar*deer*.

There was a bad accident at the Air Force base. A jeep ran over a bag of popcorn and killed two kernels.

What do you call a Mexican fighter pilot? Air Force Juan.

What gives dumbo the ability to fly? Air force one

What’s the difference between the political left wing and right wing? It’s the big plane called Air Force One in the middle.

The entire Dutch air force was disabled this week. The pilot was sick.

Why was Obama nervous when eating a T-bone aboard Air Force One? Because the steaks had never been higher.

My buddy in the Air Force got injured in the war... He fell off his chair.

Air Force one crashes trump and all his cabinet dies, who is saved? The USA

What do you call Trump riding the presidential plane? Hair Force One

I think my photographer friend is secretly in the Air Force. He keeps asking if he can use a drone to take aerial shots at my wedding.

Where does the Iranian Air Force store all its flying craft? The carpet store

I always thought Air Force would make great stand up shows... Their delivery is the bomb!

My grandfather was in the air force in the Second World War, surviving over 30 combat missions in hostile airspace. He was by far the worst pilot of the entire Kamikaze corps.

A military commander found the briefing room a little too stuffy So he told one of his officers to "Open the windows and let the Air Force come in."

So a guy walks into a careers advice centre... He walks over to the counter after reading up on some potential aviation jobs and asks "Do you know where the Royal Air Force flyers are?".

The man at the counter replied "In a rack somewhere".

Why did the USSR have such a bad air force? They kept Stalin.

A German airman on the air forces during WW2 If you see a white plane, it's American; if it's black it's RAF (Royal Air Force). If you see no planes at all, that's the Luftwaffe.

What do you call a war between the three largest air forces in the world? A civil war.

Air Force One now gets a new Code name! The COVID Express!