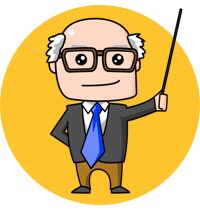 Teacher: No, Johnny, when you say 'i', it should be followed by 'am'

Johnny: Okay, I am the 9th letter of the alphabet

Boy: [bursting out of bank in ski mask] where's the palindrome

Did you hear about the math teacher who’s afraid of negative numbers? He will stop at nothing to avoid them.

My teacher didn't believe me when I said I had 36 pets so I showed her a picture of my fish tank. She freaked out when she saw how many dogs I could fit in there.

"Yes Timmy, that is correct."

Sir, your son was smoking marijuana at school during the class! Says the teacher to a student's parent at a school gathering.


The father, cleaning his tears:

I wanted to marry my English teacher when she got out of jail… But apparently, you can’t end a sentence with a proposition…

Teacher: Use a sentence that starts with "I" Bobby: I is...

Bobby: I am the 9th letter of the alphabet.

A teacher says to her class "whoever answers my next question can go home." One boy at the back of the class throws his bag out the window.

"Who just threw that? Demands the teacher.

Putin won the election with 76.6% of the vote Funnily enough the exact same percent I gave myself when my teacher told us we could mark our own tests and I didn't want to look suspicious

I wish I had Trump as a teacher. Citations would be easy

"You know it, I know it, everyone knows it"

A teacher asks the class, “What are some examples of flammable objects?” and the Jewish student raises his hand. The teacher replies, “Very good! Any other examples?” 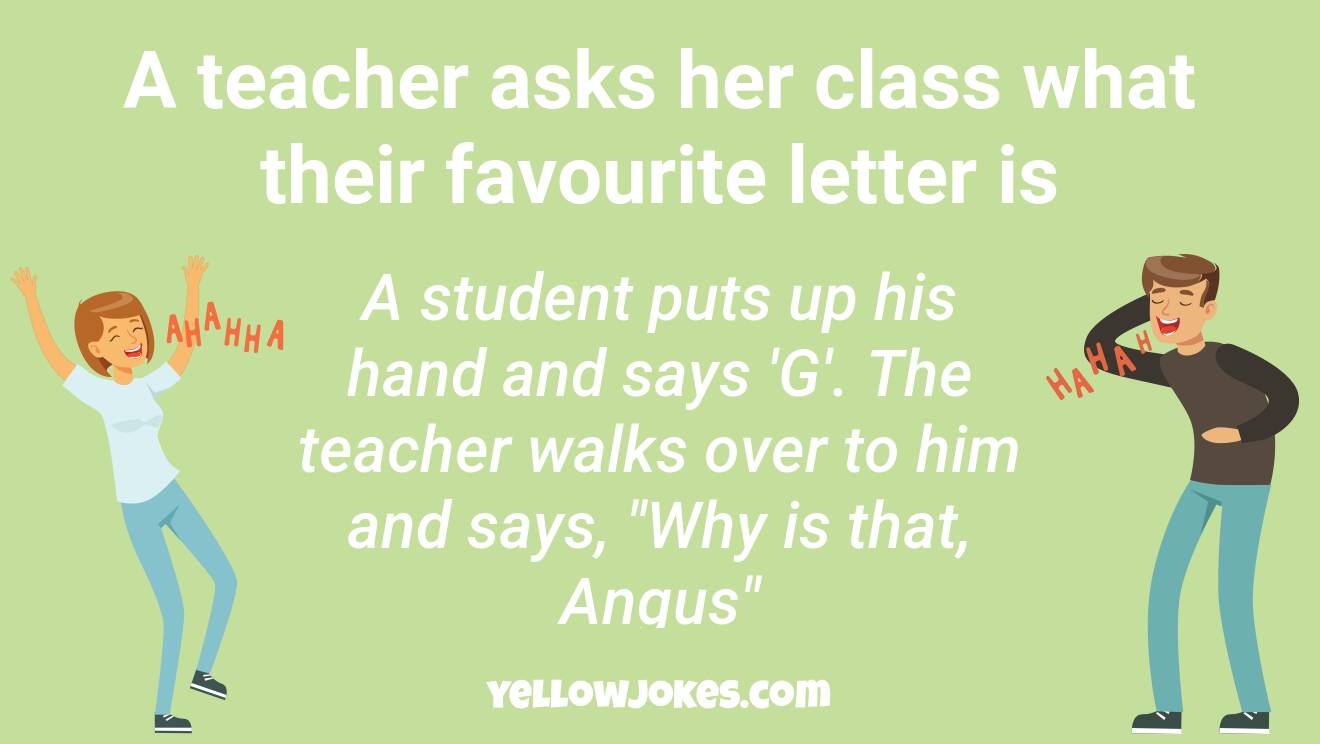 Teacher: "Whoever answers my next question can go home." *Boy throws bag at teacher* Teacher: "Who threw that!?" Boy: "Me! I'm going home!

I wanted to marry my English teacher when she got out of jail but apparently you can't end a sentence with a proposition.

I got voted “Least Likely To Succeed” by my high school class... I hate being a teacher...

My physics teacher told me I had potential. Then he threw me off the roof.

When I said to my teacher,I had 26 pets, didn't believe me. So I showed her a picture of my fish tank. Teacher freaked out when she saw how many dogs I could fit in there.

Student: Are well and actually both one syllable words Teacher: Well yes , but actually no

Someone keyed the music teacher’s car Fortunately, the damage seems to B minor

Why did the kid eat his homework? Because the teacher said it was a piece of cake.
-My 6 year old Nephew

I wanted to marry my English teacher when she got out of prison... ...but apparently you can't end a sentence with a proposition.

Why did Jeffrey Epstein's English teacher fail him? Because he never finished his sentences...

What is the difference between a teacher and a train? A teacher says "Spit out the gum!"
A train says "Chew! Chew!"

When I was a kid adults would use swear words then apologise by saying 'Excuse my French'. I still remember my first day at school when the teacher asked "Does anyone know any French?"

My biology teacher grew human vocal chords from stem cells in the lab, the results... ... speak for themselves

Student: okay! I am the ninth letter of the alphabet.

There was a cross-eyed teacher who got fired Because she couldnt control her pupils.

My physics teacher told me I had potential. Then he pushed me off the roof.

Teacher: "What can you get from a chicken?" Student: "Meat!"

My maths teacher never goes outside I can tell, cos there's no sin of his tan

What is an english teacher's favorite drink? Tequila Mockingbird

Teacher: Use dandelion in the sentence Kid *Jamaican accent*: The cheetah is faster dandelion

The teacher tells the class: 'Whoever gets the next question right, can go home early.' Benjamin throws his pencil to the front of the class. Teacher picks it up and asks: 'Who was that?'
Benjamin: 'Me, good day.'

The year 2120 in a classroom. Teacher: "That anti-vaccination movement eventually died out in the beginning of the 21st century."

Student: "I'm glad they finally came to their senses."

My Chemistry teacher was right Alcohol IS a solution.

When I was in school, my math teacher called me average. It was mean.

Just got a repressed memory foam mattress, it holds me just like my gym teacher did

My biology teacher asked me what was the ugliest vegetable IMO. Apparently, Stephen Hawking was the wrong answer.

What did a physics teacher say to calm down a student who wanted to jump off the roof? Don't do that, you have so much potential!

Little Johnny's teacher asks "George Washington not only chopped down his father's Cherry tree, but also admitted doing it. Do any of you know why his father didn't punish him?"

Little Johnny replies, "Because George was the one holding the axe!"

A teacher asks her class what their favourite letter is. One student replies "G"

Kids in class were asked to write 3 diseases One kid wrote:

Student replied it's a stroke.

A boy told his teacher he wanted to be Santa. "Why so? It seems like a lot of work." said the teacher.

"Because Santa knows where all the naughty girls live."

most clever student Teacher: Who answers my next question, can go home.
One boy throws his bag out the window.
Teacher: Who just threw that?
Boy: Me and I’m going home now.

What do you call a fantastic Japanese teacher? Sensei-tional

Teacher: "Use the word dandelion in a sentence" Student: "De cheetah is faster dandelion"

A teacher asks her class what their favorite letter is… A student puts his hand up and says, “G, miss”.

The teacher asks, “Why is that, Angus?”

Teacher says "use 'dandelion' in a sentence"... The Jamaican student replies "De cheeta is faster dandelion"

What did the Vampire say to the Teacher? See you next period.

(Heard this 20 years ago, hope it's not overly recycled)

As the teacher marked my quiz answers, she said, "This is wrong." "Question 2 ?" I asked.

"No, the way your hand is resting between my thighs."

Little Suzy wet herself in class one day.. The teacher asked "Why didn't you put your hand up?" She said "I did! but it ran out through my fingers!"

What do you call an IT Teacher who touches his students? A PDFile...

I think my math teacher works for the CIA... He always wants to put radicals in isolation.

How did the mexican girl get pregnant? The teacher told her to make an essay.

A teacher told her first grade class, "A single dolphin can have two hundred off-spring!" A little girl gasped, "How about the married ones?"

At school A teacher writes on the whiteboard: HNO3 and asks a student:

\- What substance is that?

A teacher receives a phone call shortly before the school day starts Caller: Mr. Brown, my son James will not come to school today because he is sick.

Teacher: Who am I speaking to please?

Caller: I am my father.

I got fired today for arranging the vegetables in a sexually suggestive way Apparently that's "unacceptable behavior for a special needs teacher".

My math teacher used to call me average.... It was mean.

"You know it, I know it, everyone knows it"

An English class is writing an essay One of the students asks how long the essay should be.
The teacher responds, "Like a skirt. Long enough to cover the subject, but short enough to keep me interested".

My teacher said, "Are you chewing gum?" I said, "Do I look like chewing gum to you?"

The school counsellor told me that alcohol was never a solution. I said that my chemistry teacher would disagree.

My physics teacher asked me if I understood the chapter on linear motion. I said "yeah it's pretty straightforward"

In biology class my teacher asked "What is most commonly found in cells?" Apparently "black people" was not the right answer

Did you hear about the Piano Teacher that slept with his student? She was A Minor.

My sister is a theater teacher and asked her class, "What would the world be like without theater?" One of her students replied, "Well, Abraham Lincoln would've lived a bit longer."

TIL that a class was taught by the wrong stand in teacher and the students knowingly went along with it. Whoops, wrong sub.

My math teacher called me average the other day. I thought it was mean.

Student: There was a man who lost a hundred dollar bill.

Teacher: That's nice. Were you helping him look for it?

Student: No. I was standing on it.

One brave student... Teacher: "Kids, what does the chicken give you?"

The student and the teacher. JACK: "Would you punish me for something I didn't do?"
TEACHER:" Of course not. "
JACK: "Good, because I haven't done my homework ...."

A class is learning about probability.. Teacher: If I toss a penny, what are the chances that I get a head?

Girl: For a penny? Not very bright.

My Accounting Teacher Told Us This One Today If your debits and credits don't equal, then your assets in jail.