What do you call a drunk guy trying to start his car? A lyft. Friends don't let friends drive drunk.

How do you get 100 drunk and rowdy Canadians out of a pool? You say "Please get out of the pool."

A lion would never drive while drunk. But a tiger wood.

A drunk was in front of a judge. The judge says, "You've been brought here for drinking and molesting women." The drunk says "Great! Let's get started."

A drunk in a bar is yelling "All lawyers are thieves" The guy sitting next to him says, "Whoa, easy there buddy."

The drunk says, "Are you a lawyer?" 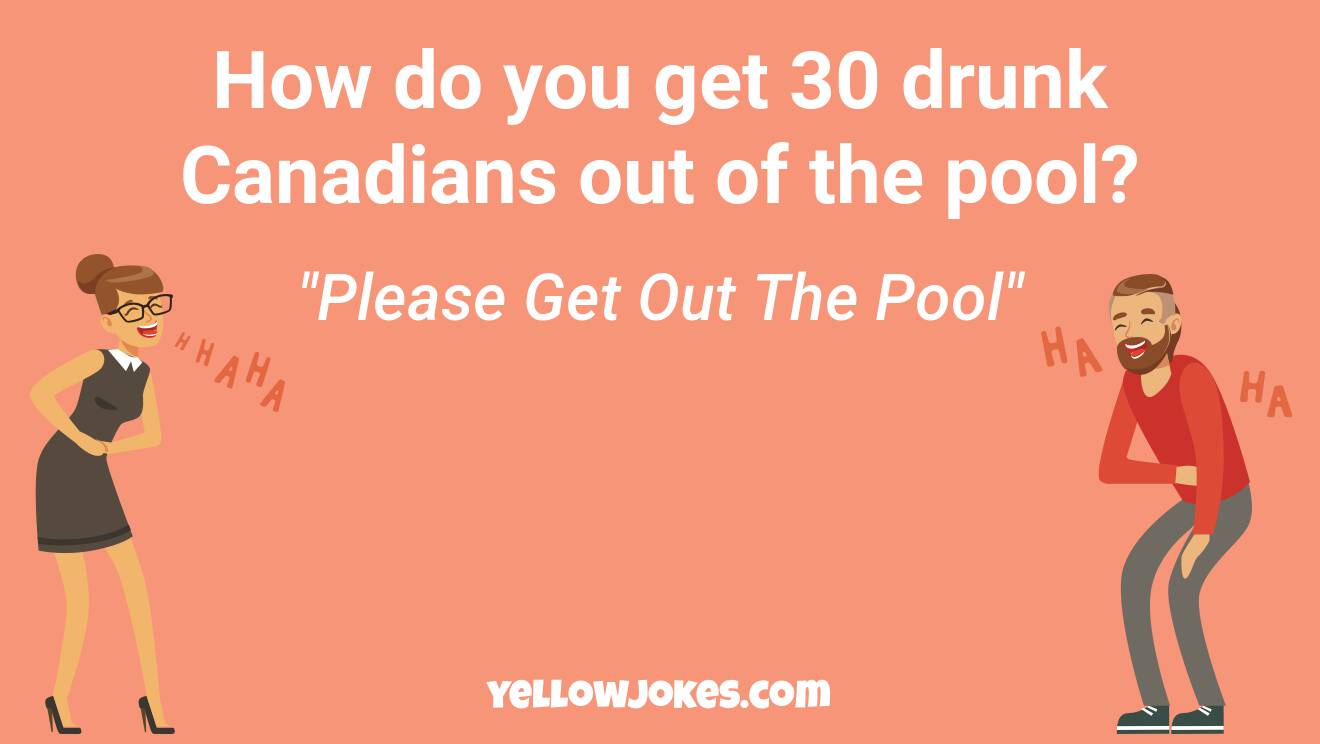 10 years ago today, I married my best friend My wife’s still really angry about it but me and Dave were drunk and thought it was a great idea

A mathematician stumbles home drunk at 3 a.m. ...and his wife is livid.

"No," slurs the mathematician...

Getting drunk at the bar the other night when the bar tender yelled out "Does anyone here know CPR?" I was feeling pretty good so i yelled back "I do, in fact i know the whole alphabet!" Everybody in the entire bar laughed..........except for one guy.

My dad was always drunk when I was a kid The punchline?

It was my mom, then my sister, then me

I told myself I should stop drinking... But I’m not about to listen to some drunk who talks to himself.

Cop pulls over bad driver Cop- sir do you realize how badly you were switching lanes?

I met a drunk ventriloquist who said she wanted to sleep with me... I didn't know whether it was her or the beer talking...

Mom: Why don't you talk to John anymore, you used to be best friends? Son: Well, would you be friends with someone who was stupid, took drugs and was drunk all the time?

Son: Well neither would he!

Awful pun I came up with whilst drunk last night. Who is the Australian Frankesntein's favourite singer?

My dad is German and dropped this one on me the other day. Dad: I never told you this but, my great grandfather died in the holocaust.

Dad: Yeah, he got really drunk one night and fell off of the guard tower.

A drunk wakes up in jail and asks the first police officer he sees, "Why am I here?" "For drinking." replies the officer. "Great!" slurs the man. "When do we start?"

There's one thing I can't stand when I'm drunk Up

I told my friend that "Last night there was a rear-end collision in my parking lot. After that, the drunk guy that hit the car gave me $800 and drove away". My friend asked me "Is that enough to fix it?" I said "I don't care, it wasn't my car."

Drunk driving or...? A cop pulls over a car in the middle of the night:

-Sir, do you realize how badly your car was swerving between lanes?

-That's no excuse to let your wife drive...

10 years ago I married my best friend. My wife is still really angry about it. But me and Dave were drunk and thought it was funny

Two drunk guys were about to get into a fight, when one draws a line in the dirt and slurs, “If you cross this line, I’ll hit you in the face.” That was the punchline...

What do you do if you’re drunk and you run into your ex wife? Reverse to make sure.

A man was having a heart attack at a bar When a patron yelled out, "Does anyone know CPR", the place went silent, then a drunk at the back yelled out "I do... I even know the whole alphabet". Everybody laughed. Well except for this one guy.

Thor and Loki enter a bar. Thor asks for two beers to start off and gets very drunk, but Loki only has water and soda the whole night. They get into a fight with each other. Even though Loki was sober, they both leave the bar hammered.

I decided to stop going to my therapist and start going to bars every night instead I just find someone drunk enough and push them from behind. They always turn around and ask “What’s your problem?”

What's the difference between LSD and my dad? LSD doesn't need to be drunk to hit me.

A blonde, a drunk, a liar, and a loser walk into a bar to order a couple drinks... The bartender says: "There's my favorite customer! What will it be this time Ms. Clinton?"

Edit: Hahaha everyone's so butthurt. It's just a joke...

So a husband and wife go out to dinner And the restaurant has a bar with a man who is drunk and making a fool of himself.

Wife: Honey, that man making a fool of himself over at the bar asked me to marry him 20 years ago

I was caught drunk driving when I saw the stunning police officer. It was a breath-taking experience.

This must be a confusing time for traffic cops Every driver and their car smells like alcohol but nobody's drunk.

What did Hitler say after being drunk for three days strait? I said GLASS of JUICE!!! Not GAS the JEWS!!!

My dad would be great on "Drunk History" Every night he drinks a bottle of Jim Beam and talks about the Vietnam War.

England's greatest spy goes undercover as a standup comedian but gets heavily drunk before the show. As he fumbles up to the stage the audience starts booing, and he starts: "I'm Bombed. James Bombed."

Cop to Irishman: Step out of the car, are you drunk? Irishman: Dint even touch alcohol mate, all night it's been just wine.

4:44 looks like a kid and it's parents sailing.. Guess it depends on AM or PM, and if you're drunk or not

The worst joke I’ve ever come up with when drunk. I identify as pansexual.

Did you hear that Moonstruck actress got drunk and sold all her fruit stocks? Cher's sherry shared Cher's cherry shares.

I hate Jewish jokes. My grandfather died in the holocaust... He got drunk and fell out of the guard tower.

-Bah! I wasn't that drunk yesterday... \- Come on Dad, you threw my hamster out of the window and shouted: Pikachu! I Choose You!

Be careful shopping while drunk. It can lead to waking up next to one nightstand.

What do Jews and guns both have in common? They always go to temple.

(My friends drunk joke, we're both Jews so don't hate)

I came home late and very drunk the other night to find my wife in bed with another man! I was furious and started breaking whatever I could get my hands on...by the time the cops showed up I had managed to trash half my neighbors house.

An Irish man walks past a bar. He was so drunk he almost fell over it.

My grandfather died in a German concentration camp He got drunk and fell out of the guard tower..

Asked my wife what she wanted to get for mothers day. She said, "Drunk."

A college linguistics club was getting drunk at a bar. You know they'll be getting into semantics tonight.

People were screaming at me for showing up drunk to the bar last night. I didn't see at ALL what the big deal was. You show up a little buzzed to take some lame law school exam, and everyone loses their minds.