My Wife wore a "Vaccines cause autism" shirt She was insulted, punched and spit on

Not to imagine what would have happened if she left the house! 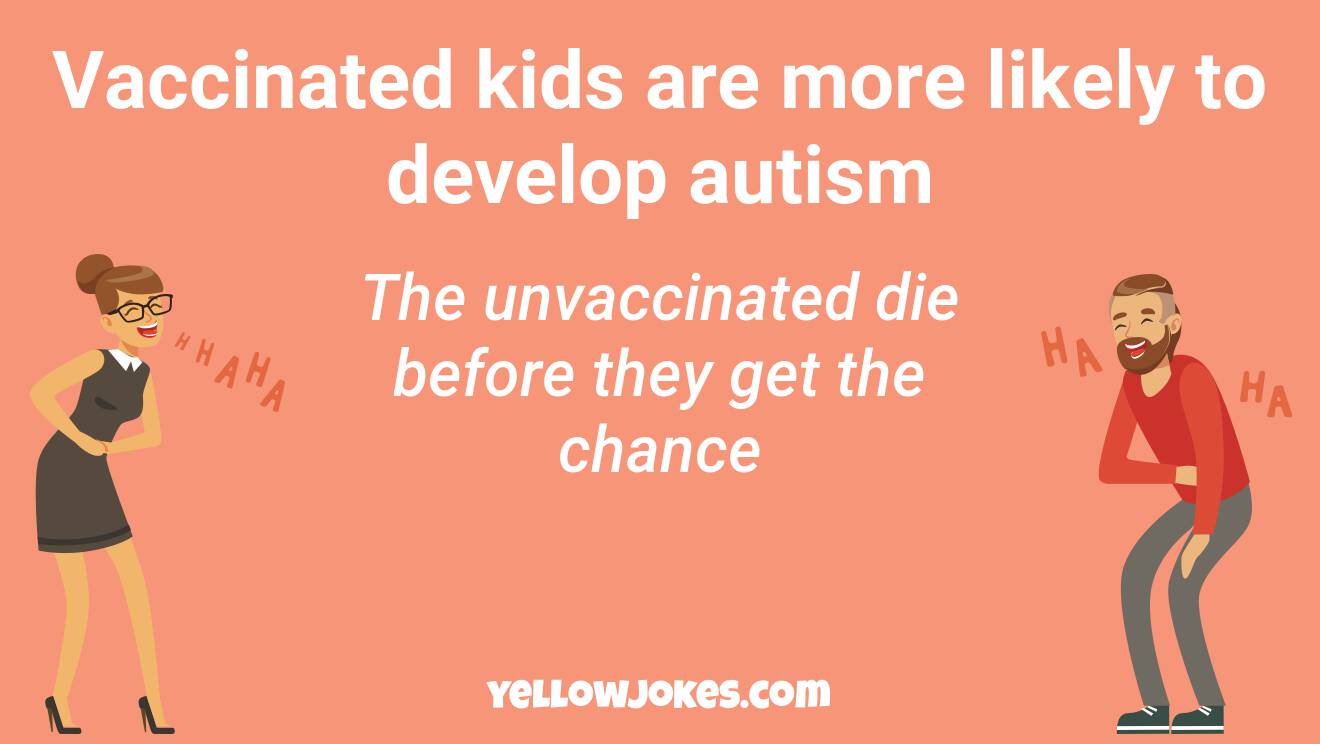 Vaccinated children have a higher chance of getting autism. After all, you have to be alive to get autism.

"Mom, why didn't you vaccinate me?" "I didn't want you to get autism, honey."

"Thanks mom. I could have not survived having autism and polio at the same time."

Why are vaccinated kids more likely to have autism? Because the ones that aren't vaccinated are dead.

People give anti-vaxxers a hard time, but they gave us one important thing... A control group for our studies confirming that vaccines do not cause autism.

I installed anti-virus on my PC Now the damned thing has autism.

Vaccinated kids are more likely to have autism Because they're still alive.

What do you call a stick with autism? Autistic

Vaccinated kids are much more likely to have autism Because the ones that aren’t vaccinated are dead.

Unvaccinated children DO have a lower rate of autism. Because they're dead.

Did you hear some people are saying listening to Queen causes autism? Apparently it's because of the unusually high Mercury content.

Why is World Autism Day after April Fools’ Day? Because it takes longer for them to get the joke.

Why is autism less frequently diagnosed in non vaccinated kids? You gotta be alive to have autism.

If I had a vaccine for every bullshit news article that's been spread about by stay at home moms on Facebook I would have autism.

So an anti-vaxxer tells me that vaccines cause autism. So I reply "Oh, so you've gotten vaccinated, then?"

~~Sorry if it's a terrible joke.~~
No regrets

My blonde wife is staunchly opposed to my kids having a vacation. She’s convinced they cause autism.

Many top scientists are on the autism spectrum.. And that means that autism causes vaccines.

I'm an anti vaccine activist, and didn't vaccinate my children. They're all dead, but at least they don't have autism!

You know, I heard listening to Queen has been scientifically proven to give people autism. Apparently because of the unusually high Mercury content.

A new study came out today showing that kids who are NOT vaccinated are actually more likely to have autism. Turns out autism is hereditary.

All of the parents who claim that vaccines cause autism have nothing to be afraid of. You can't get autism twice.

What do you call a puppy with autism? aww-tistic

I vaccinated my brother a year ago, but it didn’t work... Still doesn’t have autism.

You know about that rumor, that vaccines cause autism? I predict it'll die off in around three years or so.

It’s proven that vaccinated kids are more likely to get autism Because the ones that are unvaccinated are dead.

Why are vaccinated children most likley to get autism? Because all the unvaccinated ones are dead!

Concerning Michael Flynn The real question on republicans minds right now: what happens to the validity of Flynn's testimony when he gets autism after receiving immunity?

I didn't vaccinate any of my kids and none of them got autism. None of them lived past the age of 2, but that's beside the point.

What’s worse than a child with autism? A parent who’d prefer a dead child over an autistic one.

There was a 6th grader who transferred to my school and had green legs and autism. He was put into a special knees class.

Everybody in my family has a disorder. My mom's depressed, my dad has ADHD, and my brother has autism. There's nothing wrong with me though. I'm perfect.

It's proven that vaccined kids are more likely to have autism than the non-vaccinated ones. A dead person can't have autism.

A new study shows anti vaxed kids never get autism. They die before signs could show.

They were right the whole time. It turns out that un-vaccinated children actually are less likely to develop autism Because they're more likely to be dead.