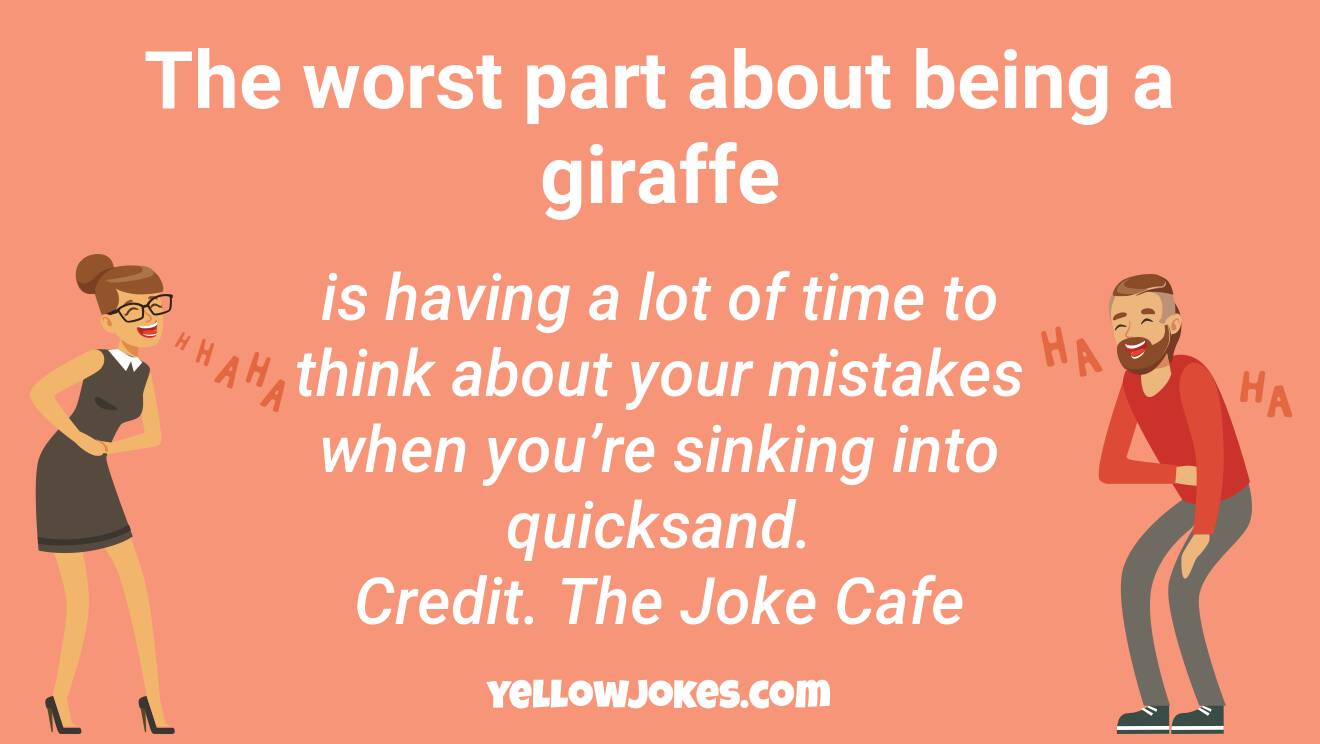 What do you get if you cross an alligator with a giraffe? A visit from the ethics committee and immediate withdrawal of your funding.

You're riding a horse, a giraffe is running next to you and a lion is chasing you. What do you do? Get your drunk as off the carousel.

A man and a Giraffe walk into a bar. The Giraffe gets drunk and falls on the floor unconscious.
The bartender says "you can't leave that lyin' there."
The man says "its not a Lion, its a Giraffe"

At the touch of her lips, it grew long and swollen. I gasped as she squeezed and pulled expertly. It was the best balloon giraffe I'd ever seen.

When I was a kid a zookeeper caught me smoking a camel. I told him I'd kill a giraffe too if he didn't keep his mouth shut.

A giraffe walks into a bar, he sits and orders 6 martinis........ Shame on you for wanting a punchline.

It takes a long time for a giraffe... ...to swallow its pride.

What kind of magic does a love-struck giraffe practice? Neck-romance-y.

What did the giraffe say to the conspiracy theorist? Nothing, giraffes aren't real.

What do you get when you cross a shark and a giraffe? A stern reprimand from the bioethics committee.

A giraffe walks into a bar and orders a beer the bartender asks, "You want a long neck?"

The giraffe says, "I have a choice?"

Why does a giraffe need such a long neck? Because its head is so far away from its body.

Why didnt the audience laugh at the giraffe' s joke? It went over their heads

How was the first giraffe made? Chuck Norris uppercutted a horse.

A English teacher says to a African student.. "okay you're doing really good with your English, I would like you to use the word dandelion in a sentence" the student replies "ohh that is easy, The giraffe, is bigger, dan de lion"

A man and his giraffe walk into a bar... The giraffe goes to sleep on the floor and the bartender says, "Oi, what's that lyin' over there?" The owner of the giraffe says, "That's no lion, that's a giraffe!"

Man walks into a bar with a giraffe The giraffe goes to sleep on the floor. The bartender says, "Aye, what's that lyin' there?" The man says, "It's not a lion, it's a giraffe!"

What is a giraffe's favorite fruit? Necktarines

Where do you put Giraffes that don't feel good? Giraffe-Sick Park

So a man and a giraffe walk into a bar... and drink until the giraffe passes out. The man goes to leave and the bartender yells, "Hey, you can't leave that lyin' there!" Man says, "That's not a lion, it's a giraffe."

At the touch of her lips, it grew hard an swollen... I gasped as she squeezed and pulled expertly. It was the best balloon giraffe I´d ever seen.

A giraffe walks into a bar... The giraffe trips and falls over, the bartender says, "what's that lyin over there." And someone replies, "that's not a lion, that's a giraffe."

Why is a giraffe's neck so long? Because it's head is so far away from it's body.

A man and a giraffe walk into a bar.. They both sit at the bar and start drinking..8 pints later...

the giraffe falls down drunk

The bartender says "You better not leave that lying there"

The man says "Thats not a lion, thats a giraffe"

So a man and a giraffe walk into a bar.... They each get wasted, the giraffe falls over.
The man goes to leave but the bartender says "oi! you cant leave that lyin there!"
The man says... "Its not a lion... its a giraffe."

A guy walks into a bar with a giraffe. The giraffe gets drunk and falls over. The man goes to leave and the bartender says, "ey, you can't just leave that lyin' there!” and the man says, "it's not a lion, it's a giraffe."

So a giraffe walks into a bar and says... ...highballs on me.

What do an elephant and a giraffe have in common? They are both gray except for the giraffe.

Why did the giraffe go off eating acacia leaves? He had an elevated palate.

The second joke I have made up!

A young couple goes cloudwatching The girl points a cloud, and she says, "Oh! I see a giraffe!"

The boy points at another, "Yeah? I see a mushroom!"

Why did the Giraffe have PTSD? Because he was giraffe'ted into the war.

A giraffe is the only animal that can walk into a bar and say ... ' The Highballs are on me'

What's the similarity between a giraffe and an elephant? - I don't know, What ?

-They both start With the letter G

-What? That makes no sense??

-The elephant's name is Greg

Have you ever think about how long would it take for a giraffe to throw up? You ain't. 'cause you only think about yourself. You selfish af.

Did you hear about the guy who says he saw a giraffe with a tail longer than it’s neck? I think he’s just telling tall tails

Once you see a lion catch a giraffe... You've seen a maul.