Boy: Dad how come there are no Jews, Christians or Muslims in Star Trek? Dad: Cause it's the future son 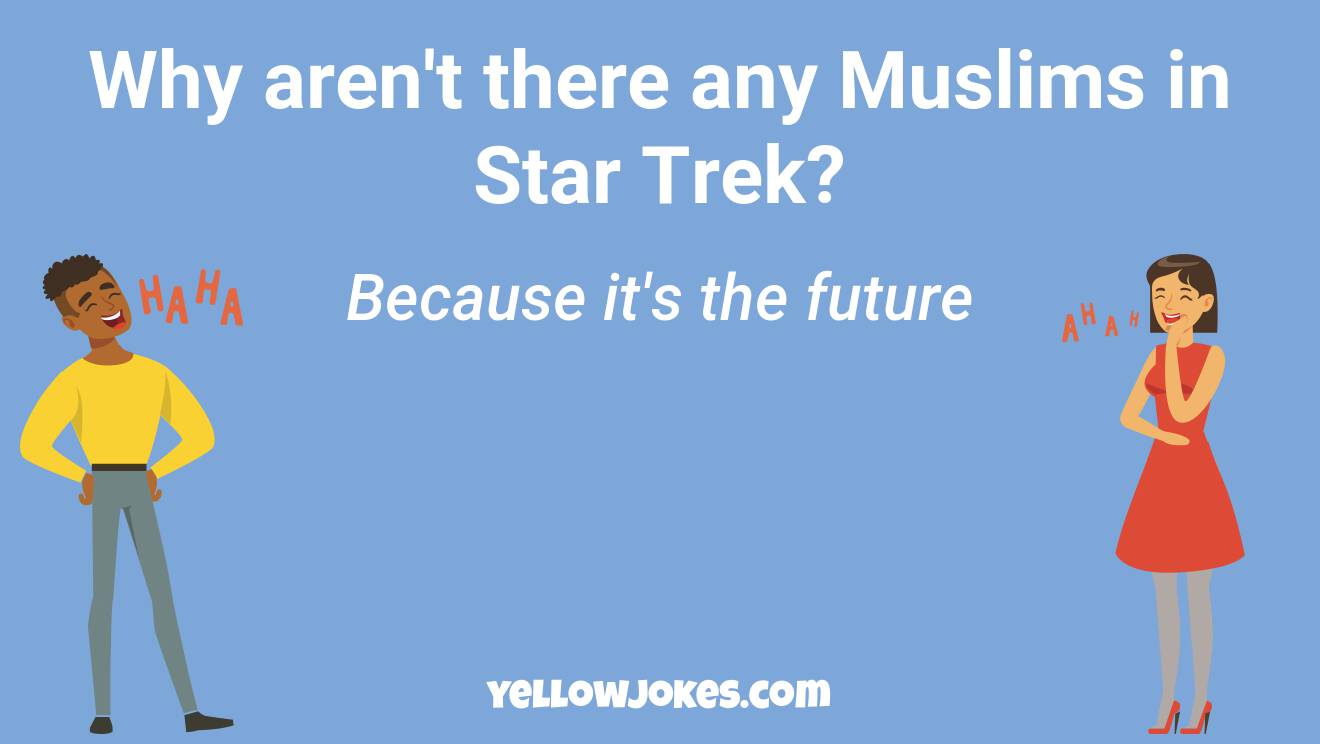 I accidentally went to Star Trek convention dressed as Chewbacca... It was a Wookie mistake

Where do Star Trek fans work out? At the He's Dead Gym.

What do toilet paper and The Star Trek Enterprise have in common? They both circle Uranus in search of Klingons.

For Star Wars and Star Trek fans A stormtrooper and a red shirt are in a room.

The stormtrooper shoots the red shirt, but misses every shot.

I tried to sneak into a Star Trek convention disguised as a Doctor. The Security Guard suspected I was not the Real McCoy.

What does toilet paper and the Star Trek Enterprise have in common? They both circle Uranus looking for Klingons.

How many ears do Star Trek fans have? 3, Right Ear, Left Ear and The Final Front-Ear.

I'm a guy who's into Star Wars, Star Trek and Doctor Who. Can you guess what I'm not into right now? A woman.

My favorite joke of all time: What do Star Trek and toilet paper have in common? They circle Uranus looking for Klingons.

I can't decide if I want to watch the original Star Trek of The Next Generation... I guess you could say I'm stuck between a Spock and a Picard place!

Star Trek Discovery is going to have a female lead which will ruin the series. The male captains wandered around aimlessly getting into trouble.

She will just ask for directions and head straight to the destination.

The original actor who played Captain Kirk tried to start a Star Trek themed line of women’s lingerie. But no one would invest in Shatner Panties.

(An oldie, but deserved a fresh posting)

What did Star Trek teach millions of kids? To boldly split infinitives!

Why did the trekkie spit out her latte at the Star Trek Convention? Cause William Shatner Coffee.

What does Star Trek and toilet paper have in common? They both travel around Uranus looking for Klingons.

I tried to sneak into the Star Trek convention as a doctor... The security guard suspected I was not the real McCoy.

What's the connection between the Star Trek Enterprise and toilet paper? They both travel around Uranus looking for Klingons.

I don't always seduce hispanic Star Trek fans... but when I do, I prefer dos Trekkies

Why are there no Iraqis in Star Trek? Because it's set in the future.

Why do Star Trek fans never grow out of it? They just Klingon to it

Teacher said this one in class....Why are there no Muslims in Star Trek? Because it's the future.

What did the Borg's existential brother say (Star Trek)? Existence is futile.

A Star Trek forum exists where Trekkies can debate additions to the universe's lore. It's called Prose and Khans.

What do Star Trek and toilet paper have in common? They both collect strange Klingons around Uranus.

What was the working title for Star Trek III: The Search for Spock? Finding Nimoy

Why do Trekkies never grow out of Star Trek? They always somehow just Klingon to it.

They should make Star Trek toilet paper... ...so you can help wipe Klingons off Uranus.

(been a while since this one's been around. Just heard it again today from my 5 year old niece)

You know why there are no Muslims in Star Trek? Because it's set in the future.

I can't wait for Tarantino's Star Trek. We finally get to see Planet What.

What have Star Trek and toilet paper got in common? They both fly around uranus looking for Klingon's

Here's two Star Trek Jokes Why did Spock look in the toilet?

Did you here about the new Star Trek toilet paper?

It flies around Uranus looking for Klingons

I had to break up with my girlfriend, she doesn't like Star Trek. I told her I need some space.

So do you know what Star Trek and toilet paper have in common? Circling Uranus looking for Klingons.

I don't get the hype about the new Star Trek Discovery Why are people so excited about a new STD series?

A terrorist blows himself up at a Star Trek convention. It's a bit awkward five minutes later when he's meeting his 72 virgins.

Why is it that Star Trek fans never seem to grow out of it? They just always Klingon to it

Today US Lawmakers are considering using the "Star Trek" Vulcan hand sign as a greeting versus a handshake I thought about making a joke like this weeks ago, turns out lawmakers don't think it's funny either.

Would you recommend the novelization of Star Trek II? I heard there was prose and Khans.

Why did the Star Trek: The Next Generation fans end their relationship? There was no Spock between them.

Why are there no Mexicans in Star Trek? Because they don't work in the future too.