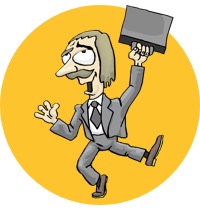 A man in an interrogation room says “I’m not saying a word without my lawyer present.” Cop: You are the lawyer.

Lawyer: Exactly, so where’s my present?

Courtesy of my youngest child - why didn't Elsa see a doctor for her sore throat and cough? Because a cold never bothered her anyway.

My youngest son thought of this all by himself...he's a 38-year-old lawyer in Nebraska.

A man was arrested and taken to an interrogation room He says to the police officer, "I'm not saying a word without my lawyer present."

"You are the lawyer," says the policeman.

"Exactly, so where's my present?" 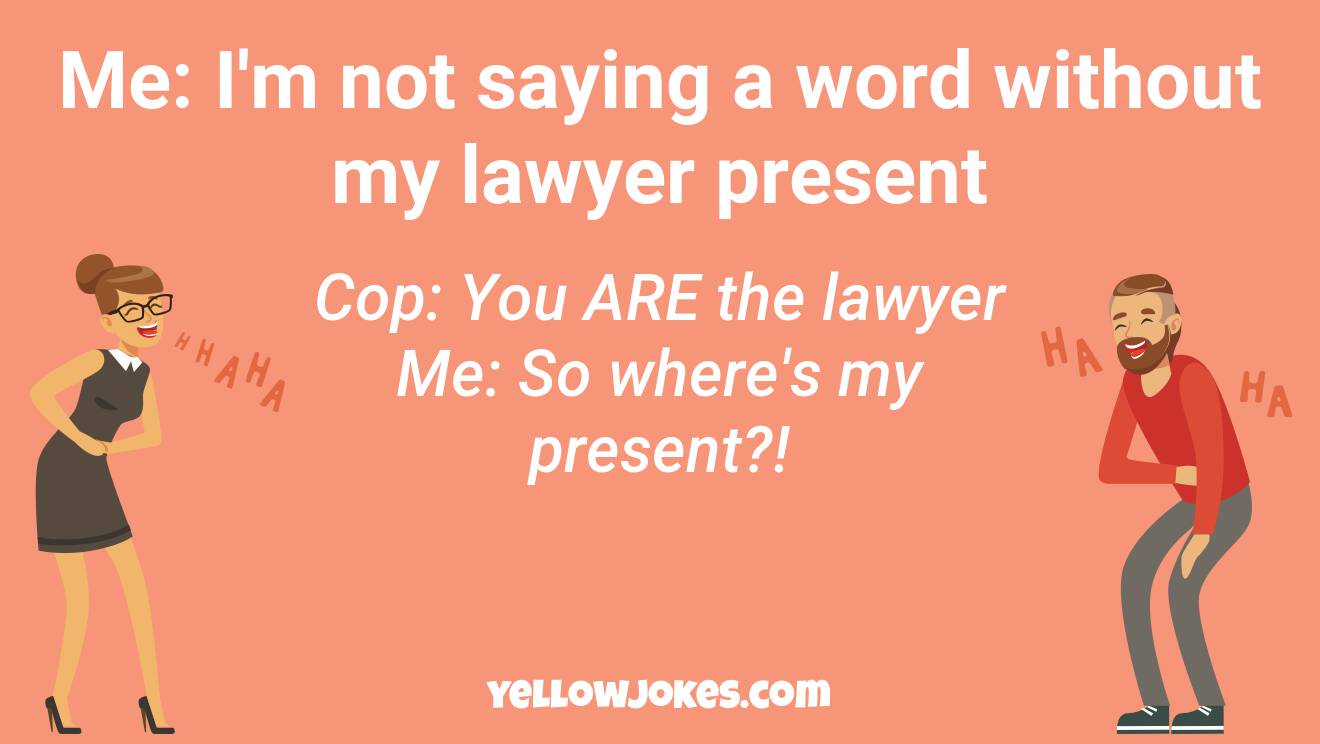 What do you call a priest that’s also a lawyer? A father in law

A drunk in a bar is yelling "All lawyers are thieves" The guy sitting next to him says, "Whoa, easy there buddy."

The drunk says, "Are you a lawyer?"

A man in an interrogation room says, “I’m not saying a word without my lawyer present!" The cop growls, "You are the lawyer!" The lawyer shrieks, "Exactly! So where’s my present

What do you call a priest that is also a lawyer? A father in law

I showed the damaged remains of my luggage to my lawyer and said, “I want to sue the airline.” “You don’t have much of a case,” he replied.

What do you call a priest that becomes a lawyer? A father in law.

Someone once told me that taking money out of your savings account is stealing from your future self. Well luckily for me my future self won't be able to afford a lawyer to press charges against me.

Santa and Mrs. Claus have decided to break up However, finding a divorce lawyer at the North Pole is next to impossible, so instead they got a semicolon.

They're great at separating independent Clauses.

"Dad, are they allowed to put two people in the same grave?" "I don't think so, son. Why do you ask?"

"Because that headstone over there says, 'Here lies a lawyer and an honest man.'"

Husband: "I want a divorce... My wife hasn't spoken to me in six months"

Lawyer: "Think about it once again.Wives like that are hard to find."

When I become a lawyer I want to defend a penguin. Just so I can say the words “Your Honor, clearly my client is not a flight risk.”

What do you call an online lawyer E-legal

what do you call a priest who quits to become a lawyer? ..... a father in law.

I showed the damaged remains of my luggage to my lawyer and said, "I want to sue the airline." Lawyer: "I see, but you don't have much of a case."

I showed the damaged remains of my luggage to my lawyer and said "I want to sue the airline".. "You don't have much of a case", he replied

The reason for the wage gap is that men have high paying jobs like doctor, lawyer, etc. while women usually have lower paying jobs... ...like female doctor, female lawyer, etc.

If your mother-in-law and a lawyer were drowning and you had to choose... would you go to lunch or a movie?

What does a black man call a black lawyer? A brother in law

How do you stop a lawyer from drowning? Shoot him before he hits the water.

What do you call a priest who became a lawyer? A father in law.

What do a sperm and a lawyer have in common? They each have a one-in-a-million chance of becoming a human being.

What starts with M, ends with E and can bring two people eternal happiness? Me, I'm a divorce lawyer

Do you think they can bury two people in the same grave?... I've just been wondering ever since I saw a headstone that said, "here lies a lawyer and an honest man".

What's the difference between a lawyer and a $400/hour prostitute? The prostitute tells you upfront that you are going to get screwed.

LAWYER: Now sir, I'm sure you are an intelligent and honest man. WITNESS: Thank you. If I weren't under oath, I'd return the compliment.

What did the french trademark lawyer say to her wife? Je™

If a priest became a lawyer, what would he be? A Father-in-law

A broke man goes to a famous lawyer... "I have no money but I can give you an original Picasso drawing"

"That sounds good! What are you accused of?"

What do you call a priest who becomes a lawyer? A father in law

A lawyer walks into a doctor’s office with a huge tumor on his face... Doctor says, “Why didn’t you come sooner?”
The tumor says, “To be honest, I was ashamed to leave the house.”

Lawyer: My client is trapped inside a penny Judge: What?

Lawyer: He's in a cent

Judge: You're going to jail with him

A lawyer, a spy, a money launderer, and a mob boss walk into a bar. The bar tender looks up and says, "you must be here to talk about adoption".

The spouse asked the lawyer 'when are you going to become a judge' ? The lawyer replied: 'After 8 PM'.

I don't understand ownership laws My neighbours kid fell out of their tree and landed on my fence. They told me I needed to get a lawyer immediately...if I wanted to keep my half of the kid.

If I lose, who will reimburse the taxidermy?

What do you call an Aussie who lies for a living? A lawyer.

What's the difference between a dead lawyer on the road and a dead dog on the road? The skid marks in front of the dog.

Where does a lawyer go to buy a bed? A MatressFirm

The attorney filed a motion for a new trial. The judge barked angrily "On what grounds!?" "Your honor," the lawyer explained, "my client has discovered some money that I didn't know he had."

What was the difference between the dead lawyer and the dead cat on the side of the road? The cat had tire marks before it.

Whats the difference a lawyer and a catfish? One's a scum sucking bottom dweller and the other is a fish.

Why didn't the lawyer steal his coffee? He wanted legal grounds.

What do you call a Asian lawyer Sue-Yu

What was the deal the coffee-addict lawyer offered potential clients? Grounds for divorce

What do you call a nun who has become a lawyer? A sister in law

Lawyer : She had 3 children, yes? Witness : Yes
Lawyer : How many were boys?
Witness : None
Lawyer : Were there girls?

*This was a real conversation in court*

What did the lawyer call the sleepy judge? Yawner.

A lawyer, a spy, a mob boss, and a money launder walk into a bar. The bartender says: "you guys must be here to talk about adoption."

The President's son, son-in-law, campaign manager, and a Russian lawyer walk into a bar… finish that one for me, will ya

I went to a lawyer to change my will today, but it turns out, I can't leave all my money… …to an imaginary friend, unless they have a church…

You know you're in trouble... when your lawyer needs a lawyer.

What do you call a lawyer that likes U2? Pro Bono.

What is the ideal weight of a lawyer? About three pounds, including the urn.

What's the difference between a lawyer​ and a catfish? One's a bottom-feeding scum-sucker and the other's a fish.

A Lawyer Walked Into A Bar He never was very good at the limbo.

I found a really good lawyer... He got my sodomy charge reduced to tailgating.

A blond, a rabbi, a schoolkid, a lawyer, a prostitute, the pope, a pirate and George Bush walk into a bar... The bartender says:

Is this a joke?

A man is walking through a cemetery when he sees a headstone that reads, "Here lies John, an honest man and a lawyer."

"How about that," he thinks. "Three men buried in one grave!"

A man goes to see his lawyer and says.... "I can't stand my name. I'm sick of people making fun of me. I want to officially have it changed."

"What do you want to change it to?"

Apparently Aaron Hernandez misunderstood his attorney when his lawyer told him to... hang in there

What's the difference between a lawyer and a bucket of slime? The bucket.

Lawyer: "My client is trapped inside a penny." Judge: "I beg your pardon?"

Lawyer: My client is trapped inside a penny. Judge: What?

Did you hear about the lawyer with a jurisprudence fetish? He got off on a technicality.

It's so cold today... I saw a lawyer with his hands in his own pockets.

Lawyer's Joke for Lawyers What do you call a lawyer with an IQ of 60?

An economist, an accountant and a lawyer decided to gamble.... And that's how stock markets came into existence!!!

A doctor, a priest, and a lawyer walk into a bar... The bartender looks up and says, "What is this, a joke?"

A rabbi, priest, and lawyer walk into a bar. The bartender looks at them and says, "What is this, some kind of joke?"

Whats the difference between a lawyer and a raccoon? when found dead on the side of the road, the raccoon has skid marks in from of it.

A prostitute decided to go to law school for a career change, Law school admissions to prostitute: "What makes you think you'd make a good lawyer?"

Prostitute: "I always try to get my clients off, as do lawyers do."

What was U2's lawyer's hourly rate? Nothing, he was pro-Bono

What professional hates going to the bar? A lawyer

What do call a bad lawyer? Congressman

so a law school student walks into a bar- -exam and walks out a lawyer! good job I'm so proud of him.

A lawyer was confused and hassled with mathematics of a case... ... So he asked his secretary:
"If I give you USD 3 million less 17.5%, how much would you take off?"
Secretary: "Everything Sir! Dress, Underwear, Everything."

Wolverine and a lawyer walk into a bar. The bartender says, "No claws, please!"

A man calls up his lawyer and asks, "How much would it cost me to ask you three questions?" The lawyer responds, "$250."

"Not really," said the lawyer. "What's your third question?"

why didn't the alcoholic become a lawyer? because he couldn't pass the bar

What's the difference between a catfish and a lawyer? One's a slimy, scum-sucking bottom feeder, and the other is delicious dipped in batter and deep-fried.

Lawyer: “Yes, what is your third question?”

What do you say to a lawyer with a IQ less than 50? Good morning your Honor!

I never know what to say to something after they've lost their baby. "Oh I'm sorry for your loss," doesn't cut it.

That's why I keep my mouth shut and let my lawyer do the talking.

what's the difference between an Irishman and a lawyer? an Irishman would never pass the bar

What do you call the amount of time it takes to win an argument with a lawyer? An attornity.

What's the difference between a lawyer and an Irishman? [OC] One has passed a BAR.

A Presbyterian, a lawyer, a blonde, and a dog walk into a bar. The bartender looks up and says "What is this, some kind of joke?"