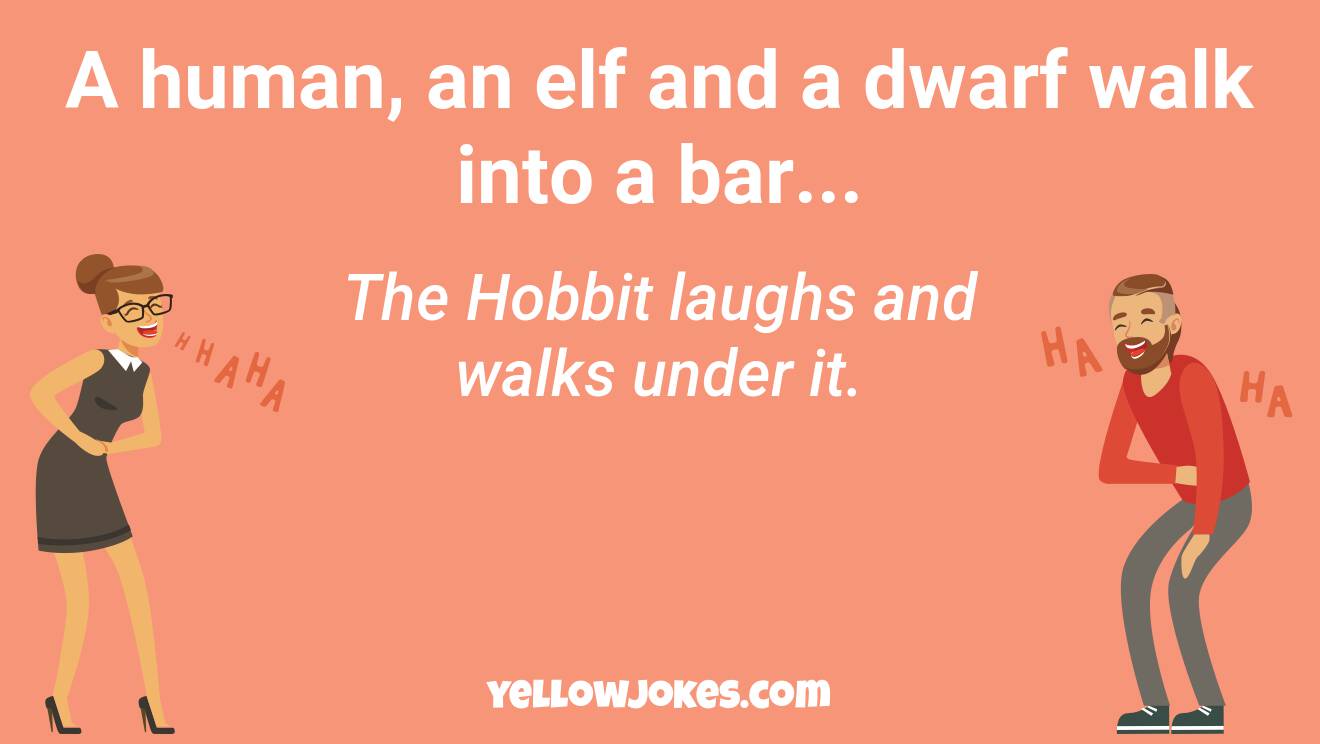 What's the rudest type of Elf? The GofuckyoursELF

An Elf, a Dwarf, and a Man walk into a bar The Hobbit laughs at them and walks under it.

So an elf walked into a bar... The hobbit laughed and walked under it.

Q. What's the rudest type of Elf? A. The GofuckyoursElf.

When is a pixie not a pixie? When she's got her head down an elf's pants, then she's a goblin.

What do you call an elf wearing earmuffs? Anything you want. He can't hear you.

When is a pixie not a pixie? When she has her head down an elf's pants. Then she's a goblin

Why did the elf have to play with Mega Bloks? Because he was Legoless

What sort of elf lives in a can? A sprite

When is an elf not an elf? When he’s got his head up a fairy’s skirt, then he’s a goblin.

What's the difference between Santa Claus and Harry Potter? Santa would never free an elf.

What do elves learn in preschool? Not the elf-abet, no; they don't learn anything because they don't exist.

An elf walks into a bar. (LOTR) The hobbit laughed and walked under it.

What do you call a workplace accident at the North Pole? Shelf on the elf.

What do elves learn in school? The elf-abet.

What do you call an elf with a personal trainer? Elfy.

What kind of jokes would a depressed elf tell? Elf-deprecating.

An elf and a human walk into a bar... The halfling and the dwarf pass under it.

You've heard of Elf on a Shelf, but have you heard... Jeffrey Epstein definitely didn't kill himself.

Why was Santa's helper doing so poorly at work? Because he had low elf-esteem

(I hope this hasn't been posted recently...Sorry if it has)

What do you get when you mix an elf and a scientologist? Elrond Hubbard!

why was santa's little helper so depressed? he had low elf esteem!

Which elf was the best singer? Elfis Presley

What do you call a double-amputee Irish elf? Leg O'Las

How did you learn archery? I'm elf-taught.

He was a metro gnome.

Here in about 50 years, when Harry Potter is on its 5th reboot, this time with an all house elf cast, the author will be J. K. Rowling over in her grave.

Did you hear Santa’s been kicking off at his workers again? He’s got mental elf problems.

The place I store my loud elf Shhh elf

100 days to go before Christmas...and who is Santa’s favorite singer? Elf-is Presley

What do you call an elf that won't shut up? Gobby.