As a security guard, my Boss said my job is to watch the office I’m on season 6 so far, and not sure what this has to do with security.

At the parole hearing, the officer asked, "Tell me, why should you be released early?" The inmate responded, "It’s bec..." Officer: Yes?

Inmate: I think I have..

Inmate: Can I Please finish my sentence?

Security officer: If you find a USB outside, don't bring it into the office Me (taking notes): Note to self: Only bring international bees into the office

A German was going to a trip in France... He reached passport control and the officer asked:

"No no, just visiting"

I was pulled over last night and the officer asked me if I had a police record. I told him “no but I have a couple albums by Sting.

A drunk wakes up in jail and asks the first police officer he sees, "Why am I here?" "For drinking." replies the officer. "Great!" slurs the man. "When do we start?"

One of the girls in the office where I work is going to be having a baby. I just haven't decided which one yet. 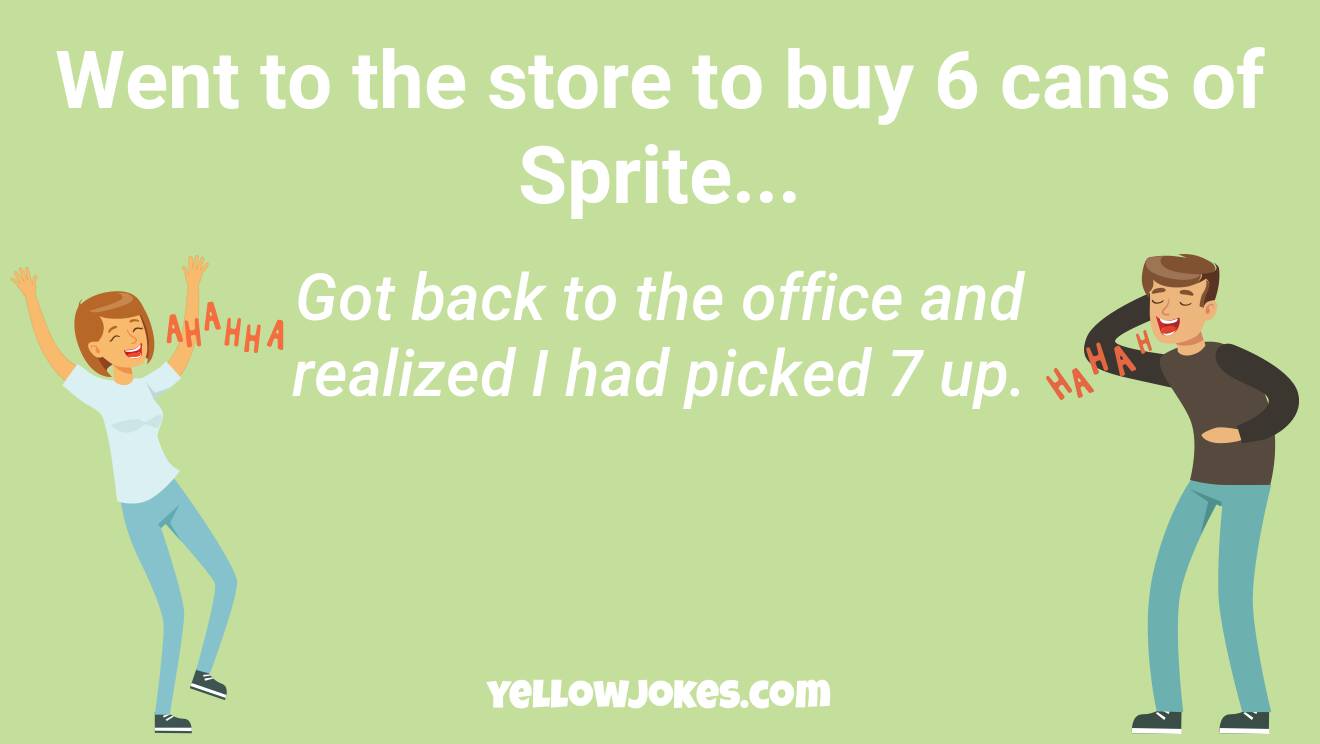 Why is Christmas like a day at the office? You do all the work and the fat guy in the suit gets all the credit.

My boss came storming in to the office this morning, yelling that he’ll fire the employee with the worst posture... I have a hunch it might be me...

At the parole hearing, the officer asked, "Tell me, why should you be released early?" Inmate: it's bec..

Inmate: I think i have..

Inmate: Can i please finish my sentence?

My boss told me "As a security guard, its your job to watch the office".... I'm on season 6 now but don't see what it has to do with security

I misplaced something at the office. A nice man in a turban helped me locate it. I guess it's true what they say. Sikh and you shall find.

(edit: same man teased me about the pronunciation. It was good natured, but it was still a Sikh burn)

My friend believes The Office is the best television show, and belittles anyone that thinks otherwise I'm so tired of these Dwight Supremacists

The boss tells one of his jokes and everyone burst out laughing in the office. Except for one guy. When asked "Why didn't you laugh?"
He responded " I don't work here"

The officer said “You’re staggering.” I said “You’re quite handsome yourself.”
We both laughed and laughed.
I need bail money.

Why is Christmas just like another day in the office? Because you do all the hard work and the fat guy in the suit gets all the credit.

Why is a day at the office the same as Christmas? Because you do all the work, and the fat guy with the suit gets all of the credit.

If you're going to drink and drive, always carry a flask in your car If you get pulled over for a DUI, put the flask in your lap, suspiciously​ insist that it's "water," and that's when the officer finds out that's it's chloroform.

Strange new trend at the office People are putting names on food in the company fridge. Today I had a tuna sandwich named Kevin.

Criminal on the electric chair. The officer ask: Any last wishes? The criminal: Please hold my hand...

To the person at the office who stole my chair yet again Whoever you are, Im not going to stand for this!

This woman is trying to get me fired for giving inappropriate massages in the office. Good luck with that, lady. I don't even work here.

Nurse: "Doctor, the man you just gave a clean bill of health to dropped dead right as he was leaving the office." Doctor: "Turn him around. Make it look like he was walking in."

A man gets pulled over for speeding and evading the police. The officer asks him why he didn't stop. "Well," says the man, "my wife ran off with a cop last week and I was afraid you were trying to bring her back!"

Why do we call the office printer Bob Marley? Cause it's always Jammin'

A blonde is driving her car and... ...she runs over 20 people while driving.
The officer pulls her up and says "Miss', do you know you just ran over 20 people back there?"
She replies:
"I'm sorry officer, what's the limit?"

We got a new whiteboard at the office today... It's remarkable!

A guy's boss who is traveling calls him and asks, "Is everything okay at the office?" "Yes, it's all under control. It's been a very busy day, I haven't stopped."

"Hurry up and take your shot, I'm behind you on the 7th hole."

The officer told me: "You're staggering". I said: "You're quite handsome yourself"

We just laughed and laughed.

I just put my phone on airplane mode and threw it across the office Worst transformer ever.

Why is Christmas just like a day at the office ? You do all the work and the fat guy with the suit gets all the credit.

When interviewing the police officers involved in Tiger Woods' arrest, they told how they came to suspect he was under the influence. "Simple" The officer responded. "It was the straightest drive he's had in years. We knew right away something was up."

Why is christmas just like a day at the office? You do all the work, and the fat guy in the suit gets all the credit.

So I got pulled over the other day... The Officer asked, "Are you drinking?"

Why is Christmas just like another day in the office? Because you do all the work and some fat guy in a suit gets all the credit.

How did the Guy who got fired, still turn up to the Office next day? He got fired from the job centre.

I'm really delighted that I received more than 20 boquets of roses with balloons from different people for Valentine's Day! and as the receptionist I had to search for all the recepients in the office 😂

A black slave escaped with a wheel of cheese. The owner was being interviewed by southern law enforcement where he asked: "will you be able to find him?" Which the officer replied: Can't say but one things for sure, he Nacho Negro.

So I asked my grandma where the office is located to take my grandpa for his Alzheimer’s appointment She forgot. Guess the appointments for 2 now.

The officer came and asked where I was between 5 and 6... I said kindergarten

Who ever you are Not Me, one day we will finally catch you. I mean how many times do you see innocent people being arrested even though they tell the officer, it was Not Me. Not Me did it!!

Christmas is like a normal day at the office. You do all the work, but the fat man in a suit gets all the credit.

As I was getting ticketed for not wearing my seat belt, a motorcyclist drove past the officer and I. What a joke.

Why was the sugar out of the office? Because it was on granule leave!

I got pulled over a while ago and the officer asked me "you drinking?" I responded "you buying?" We both laughed and I got arrested

A police officer arrests a drunk man After minutes of hassle getting the man in the police car, they're finally ready to go.

The officers turns around and says "Please fasten your seatbelt".

The man smirks and says "It's ok. Nobody will pull us over"

How do you know OP has left the office? Username checks out

A man was walking through the Australian customs... As the officer asked him "have you ever been convicted of a felony?"
"No," he answered "I didn't realize that was still a requirement."

Why is Christmas just like a day at the office? You do all of the hard work and the fat guy in the suit gets all the credit.

A thief stole my wife's credit card, I let him keep it Because he spends less than my wife does, I said to the police officer,
The officer says, then how come you are reporting it to me a year later,
I said "because the theif's wife started to use it"

A man is pulled over for speeding. Once the officer tries to talk to the man, he notices that he's very stoned. The officer then asks… "Sir, how high are you?"
Quickly the man slurs the words,
"No, officer. It's 'Hi. How are you?'"

The priests look at each other before they speak. "We'll do it."

Have you ever noticed that no believes what Ryan Howard says on The Office? He's like the boy who cried wuph

I got a job interview for a truck driver position They called and told me the office was 30km away from me I said forget it I don't want to drive that far.

I used to think hard work beats luck.. until a leprechaun banged my wife while I was at the office

A man applies for a position at EA When he gets to the office he meets with the interviewer.

I always arrive late at the office... ... But I make up for it by leaving early.

There is a Mexican, a black person, a muslim, and a gipsy in a car. Who drives it? The officer.

The Band ACDC was Arrested For Firearm Possession... They told the officer they only Shoot to Thrill

What did the Office of Admissions say to the recently-accepted Urology student? "Ur-ine!"