My grandfather warned people that the Titanic would sink No one listened, but he kept on warning them nonetheless until they got sick of him and kicked him out the movie theatre

My grandfather tried to warn them about the Titanic... He screamed and shouted about the iceberg and how the ship was going to sink, but all they did was throw him out of the theater... 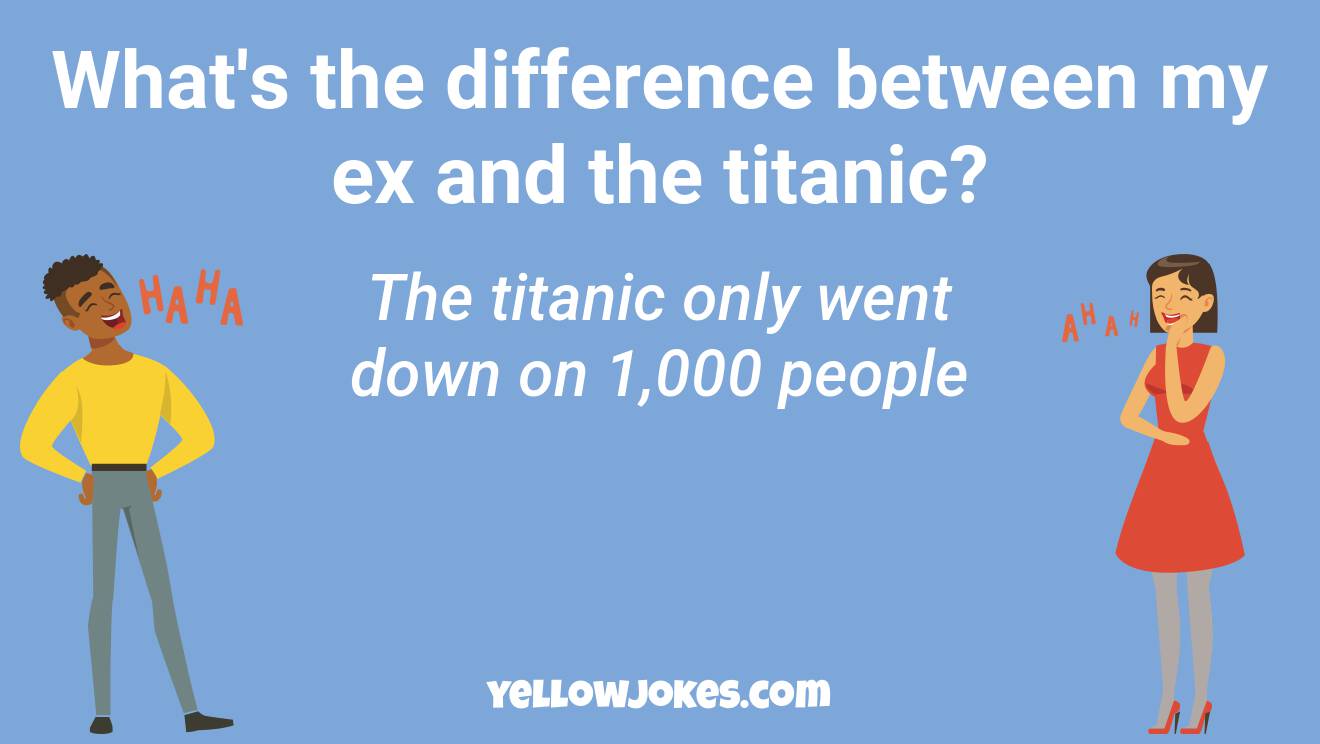 What's a horrible icebreaker? The titanic

I downloaded all the music to the movie Titanic. It's syncing now.

What's the difference between the Titanic and my ex? The titanic only went down on 1,000 people

To think the unthinkable The thtory of the titanic.

What connects The Sixth Sense and Titanic? Icy dead people.

My Grandfather warned people the Titanic would sink No one listened.

What does an iPhone 7 and The Titanic have in common? The end has no Jack.

What's the difference between the Titanic and Kim Kardashian? The number of people who rode the Titanic is known.

What do the films 'Titanic' and 'The Sixth Sense' have in common? Icy dead people.

What do the movies "The Sixth Sense" and "Titanic" have in common? Icy dead people.

A man is standing on the bow of the Titanic as it is sinking, holding a glass of whiskey. He says: "I asked for ice, but this is ridiculous"

What do you get if you cross the Atlantic with the Titanic? About halfway across

What's the difference between the Titanic and my ex-girlfriend? The Titanic only went down on 1,000 people

My grandfather saw the Titanic and he warned everyone that it would sink, but no one listened He told people a few more times and then he was kicked out of the cinema

My grandpa knew the Titanic was going to sink. He said it loudly countless times... Then he got kicked out of the theater.

What do the iPhone 7 and the Titanic have in common? There's no room for jack, on both of them

Maybe the Titanic really was a ship of dreams... and its dream was to be a submarine.

Canadian guy: Let’s watch a movie. American: Sure. How about The Titanic?

Canadian: What’s that about?

American: Yes. A big one. It sank.

What did the Titanic say to the iceberg? "Okay, but just the tip."

TITANIC Sorry that was a terrible ice breaker

The Sixth Sense and Titanic are the same movie. Icy dead people.

Now I know it's the 100 Aniversary of the Titanic and all... But aren't the Italians going a little far with their tribute

What do the Titanic and The Toronto Maple Leafs have in common... They both look great until they hit the ice.

What do you get when you cross the Atlantic with the titanic? About half way

What do Titanic and The Sixth Sense have in common? Icy dead people.

I tried uploading a picture of the Titanic to OneDrive ... But it just kept syncing.

What does Titanic and the iPhone X have in common? Jack is dead.

Did you know? The swimming pools in the Titanic are still full

My grandfather knew before the titanic sank that it was going to happen. He kept yelling and telling peope over and over but no one listened. They then threw him out of the theater, he’s not allowed back.

Right before colliding with an iceberg... The captain of the Titanic got ready to make an announcement:
"Good evening ladies and gentlemen. Fun fact, this ship weighs about 52 thousand kilograms. I'm gonna let that sink in..."

My friend told me he got to see the Titanic. He told me he was telling everyone not to get on board, because he knew it was going to sink.
They told him to shut up but he didn't stop telling them.

Eventually, they kicked him from the movies.

Over 100 years ago today, the RMS Titanic met it's watery demise in the North Atlantic. Among it's cargo was over 1000kg of mayonnaise bound for New York. So today, we remember the Sinko de Mayo.

Whats in common between the titanic and a bathroom Sink

TIL the Titanic movie was released in 3D in 2012. Even in 3D, they still couldn't see the iceberg

No one listened, but he kept on warning them nonetheless until they got sick of him and kicked him out of the movie theater. 😅

When my grandfather saw the Titanic he warned everyone that it would sink, but they ignored him. He kept on saying this until they finally threw him out of the theatre.

What was the name of the actor that played the ship in the titanic? Tom cruise

My grandfather kept on warning everyone that the titanic was gonna sink, but no one listened to him. Finally, they had enough of him and kicked him out the theater.

My dad kept on warning everyone the titanic was gonna sink, but no one listened to him. Finally, they had enough of him and kicked him out the theater.

My grandfather saw The Titanic and he warned everyone it would sink, but they all ignored him... Time and time again, he warned them, until they threw him out of the movie theatre.

What was the real reason the Titanic broke in two as it sunk into the ocean? TO SHOW YOU THE POWER OF FLEX SEAL, I SAWED THIS BOAT IN HALF!!!

When I meet someone new I always try to start a conversation about the Titanic Yes, I know. It's a terrible ice breaker.

What’s a bad icebreaker? The Titanic.

TIL the Titanic was scheduled to have an evacuation drill the same day it sank but was canceled by the captain. Now let that sink in.

What do the Titanic and sixth sense have in common? They both have that sinking feeling
(*Bu dum tss*)

Titanic x Hindenburg I ship it.

What do you get when you cross the Atlantic with the Titanic? A little over half way.

Do you want to play Titanic? You can be the iceberg and I’ll go down on you.

Got this new game on my phone called Titanic. It's kind of annoying... Every time I open the app it syncs.

The chief designer of the Titanic had a lisp... That's unthinkable!

They say 1,500 souls died when the Titanic sunk... But there were about a hundred gingers so it's more like 1,400 souls

After numerous occasions of my phone taking ages to connect to iCloud, i decided to change its name to Titanic... it syncs way better now!

What did the detective say on the Titanic? "I'm gonna get to the bottom of this"

What do movies like Titanic and The Sixth Sense have in common? Icy dead people.

What do the movies Titanic and the Sixth Sense have in common? Icy dead people.

What's the best icebreaker? The titanic.

What's the difference between Gene Simmons and the Titanic? Only 425 women went down on the Titanic.

What does Titanic and The Sixth Sense have in common? Icy dead people.

I had a phobia of icebergs, so my psychiatrist said to try taking my phobia head on. As Captain of the Titanic, there might've been some misinterpretation going on there...

People probably didn't wait long after the Titanic crashed to joke about it. At least the bodies weren't still warm.

I just named my iPad "The Titanic" ...so when it syncs, iTunes tells me "The Titanic is syncing."

Mary Pennington, the oldest survivor of the Titanic, died this week at the age of 106. Sad in any case, but what really made it tragic is that she was only a quarter mile from shore.

I changed my iPhone's name to "Titanic" It's syncing now.

The Titanic weighed about 52 tons... I'm gonna let that sink in

It's been 105 years since the Titanic incident. Let that sink in.

Why did the engineers of the Titanic II make sure to include a solid Bluetooth system? They didn't want the ship to get stuck syncing again.

What do you call a titan that can't swim? Titanic

TIL Scientists were surprised to find the Titanic's grand swimming pool still full after 100 years.

My Friend Told A Titanic Joke It was ice cold.

What's the difference between Bill Clinton and the Titanic? Only 109 women went down on the Titanic

I once tried greeting everyone I met by saying "titanic"... Turns out it wasn't a very good ice breaker

the best girlfriend What's the difference between my ex and the titanic? The titanic only went down on 1,000 people.

watched The Titanic for the first time today what an immersive experience! i was engulfed from start to finish. i'll have to watch it again to really let it sink in though...there were some parts where i felt like i was in over my head, you know?

I learned an interesting fact about the Titanic today The swimming pools on it are still full of water.

You know what I find amazing? That after 107 years, the Titanic's swimming pools are still full.

What is a bad ice breaker ? The Titanic

Why did the Titanic have a hard time getting a date? It couldn't break the ice.

Modern economy vs the Titanic Both heading in the same direction, but the game of musical chairs was more fun on the Titanic

What do the final scene of titanic and the iPhone 7 have in common? They both could've fit the jack

Watching a cooking show when "We believe this was the last dish they served on the Titanic on that fateful day" I bet that went down well.

Hey, have you heard of the titanic? Sorry, I couldn't think of a good icebreaker.