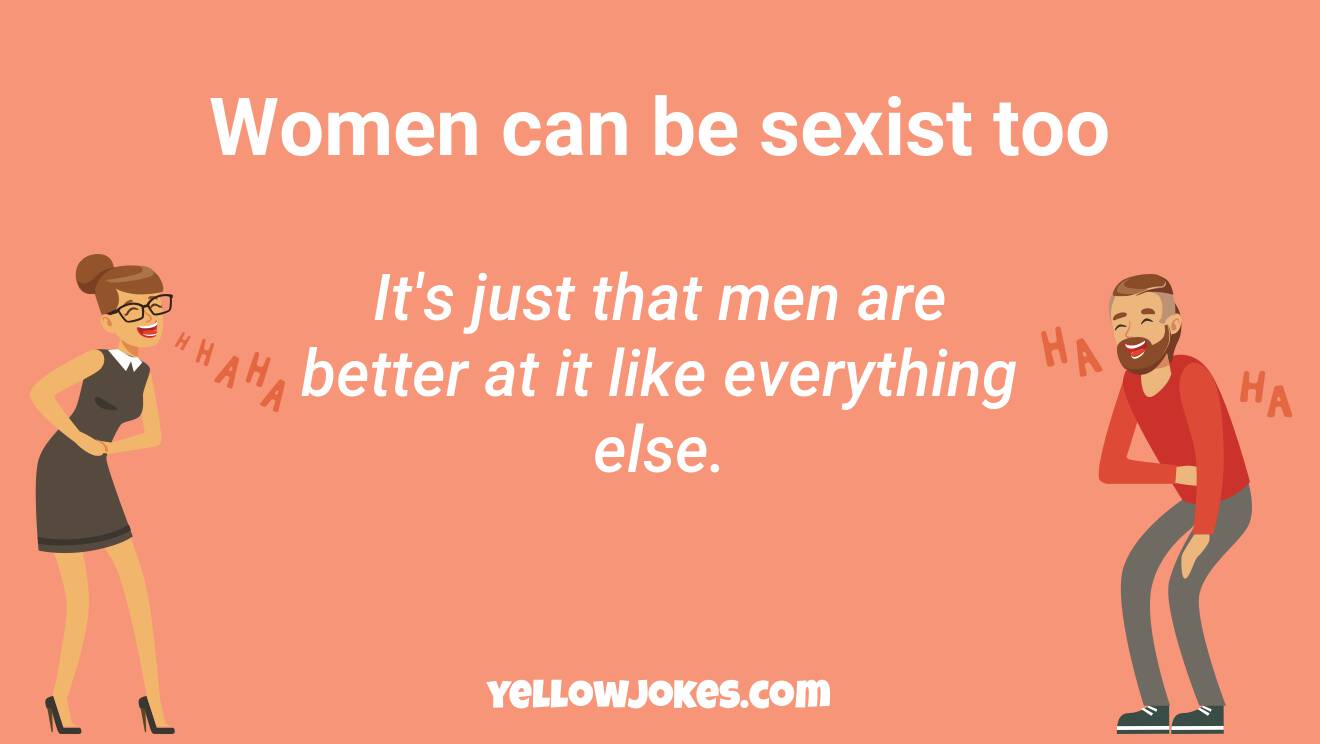 If there's anything my wife has taught me about being sexist, It's probably wrong because she's a woman.

If my wife made a dollar for every sexist joke I make She'd be $.77 richer right now

If I had a penny for every time someone called me sexist... I'd probably be earning more than the average woman.

It's crazy how sexist the postal service is. I guess that's natural with such a mail dominated industry.

Im not sexist... Because thats wrong and being wrong is for women

Donald Trump is really a proved racist and sexist, because... He beat a woman badly in his run for the presidency and threw a black family out of a white house...

What do you call a sexist Masseuse? A Massaginist!

It's an awful joke I came up with last night and couldn't stop giggling thinking about it.

Women are just as sexist as men But just like everything else, men are just better at it.

I don't tell sexist jokes at parties any more... ...They're too complicated for women.

Being a sexist doesn't bother me at all. The only people that will call me a sexist are women and their opinion doesn't matter.

if i had a dollar for every sexist joke ive told I would have $0.77

What did the man say to the feminist to get her angry? Nothing. The fact that he didn't say anything to her made her think that he thought he was superior and therefore a sexist, misogynistic, scum of the earth

What happens when you tell a sexist joke to a feminist mod? [Removed]

A racist, a sexist and a priest walk into a bar. The bartender says: "Hey Bill, drinking alone tonight?"

If I had a dollar every time I was called sexist... I'd be making more money than the average woman

I can tell we still live in a sexist society because... Doctors still make more money than nurses.

Q: How many feminists does it take to change a light bulb?

A: *None, feminists can't change anything*!

A rapist, a sexist and a racist walk into a bar Barman: How can I help you Mr. President?

I'm not sexist because sexism is wrong. And being wrong is for women.

A comedian was getting attacked for his routine being too sexist So, he replaced the word "women" with "white, rich, republican women". The audience stopped complaining.

I've decided to stop posting sexist jokes.... Because women find them too complicated.

My favorite winter Olympic sport is women’s curling... Because it’s the one time every four years I can yell, “sweep harder” at a woman, and no one thinks it’s because I’m a sexist pig.

What's a Racist, Homophobe, Sexist, Bigot, or Hater? Anyone winning an argument with a liberal.

The wage gap is sexist, because a woman gets 70 cents for every dollar a man makes... ... then the man is only left with 30 cents. That's messed up.

What do you call a sexist masseuse? A massage-ynist.

I'm not sexist because being sexist is wrong And being wrong is for women.

A sexist, a racist and a homophobe walk into a bar Bartender: 'What will it be, Mr Trump?'

What do feminists hate more than sexist jokes? Having it explained to them by a man

What’s the male equivalent of a feminist? A sexist.

Today a woman called me "the most sexist man she'd ever met" When will these dumb broads understand that "sexiest" is spelled with two E's and not one?

What did the sexist man say when his girlfriend asked for his coat? If you can't stand the cold, stay in the kitchen.

Society is so sexist When a guy sleeps around with many women, he's called a jock.

When a woman sleeps around with many men, she's called your Mom.

My wife was teaching our children that Barbie and Disney were sexist and misogynistic. I happen to believe that children learn through examples set by their parents.

So I told my wife to shut her yap and get back in the kitchen.

Don't worry, it's not sexist! I'm half woman on my mothers side.

Loads of people say I'm sexist, but I'm not. Sexism is wrong and being wrong is for women.

What do you call a female physicist? A physicist you sexist.

I wanted to get into cycling a bit more since I got out of shape during quarantine. So I downloaded this app called 'Cycle tracker' and apparently cycling is very sexist towards men.

A sexist man went to the phychologist. Phychologist: The first thing you have to do is to accept who you are.

Man: I don't need a woman to tell me that!

My friends tell me that my jokes are too sexist. I tell them thats all I have. Without my sexist jokes, I am completely useless. Kind of like a woman

Cam Newton isn't really a sexist... He's just getting a jump on his Presidential Campaign.

What do you call a sexist masseuse? A *massage*nist