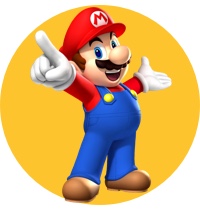 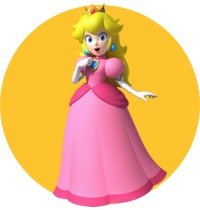 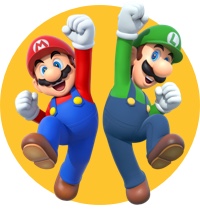 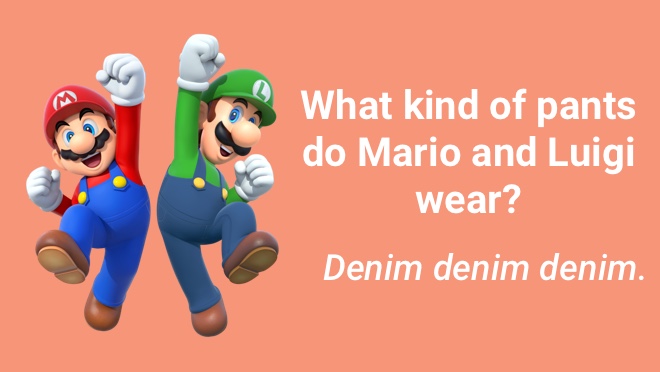 Why isn't Hitler in Mario Kart? Because he cant finish a race

I wanted to revisit my childhood, so I got out Super Mario Bros. and started playing But soon I realized, no matter how much you try, you can't go back.

Mario is a recovering alcoholic... haunted by the thought of Boos.

"It's a boy!" Mario shouted. "It's a boy!" With tears rolling down his cheeks, Mario came running out of the room....and never visited Bangkok again.

”What doesn’t kill you, makes you smaller.” - Mario

What did Super Mario's French teacher say when Mario mispronounced the word for "friend"? It's *ami*, Mario!

Toad was always my favorite Mario character He just seems like a fungi.

Some people say that Nintendo has no 3rd party games... They have obviously never heard of Mario Party 3

My girlfriend broke up with me yesterday. She said she was tired of the abuse, and couldn't take it anymore.

She's the one who wanted to play Mario Kart.

My son is in hospital because of one little driving mistake... He beat me at Mario Kart.

Mario games are unforgiving... ... there's not mushroom for error

Which course did Hillary Clinton select when playing Mario Kart? The short circuit

Why isn't Sean Connery allowed to play Super Mario Bros. any more? He kept trying to shave the princess.

What's the difference between a cow and Super Mario Bros? A cow can't be milked for over 30 years

I don't always drink and drive. But when I do... it's when I'm playing Mario Kart.

Why couldn't Super Mario surf the web? Because Browser wouldn't let him.

Where did Mario meet the Princess? Nintinder

Why can't Mario get a tinder date? His profile picture was him killing a turtle.

Why did the Piranha Plant start coughing? Because Mario went down the wrong pipe!

Why did Mario get fired from being a plumber? He never put his caulk away.

Plumbing I like the Mario games and all, but... I have a hard time seeing Mario as a plumber when his entire life revolves around clogging some pipes

What happens when Mario parks his car outside the wrong castle? He gets Toad

What did Mario say when his friend Gus was about to be shot in front of him? Asparagus

Super Mario Odyssey is a gigantic game. I've been playing for many moons.

When Mario collects coins with his cap in Super Mario Odissey,... you for sure know he is very _cappytalistic._

My friend thought he was better Super Mario player than me... But he was wrong on so many levels.

I love Toad from Super Mario you know, the little guy with the mushroom head. He always made me laugh.

Growing up people told me I'd never get a girlfriend playing video games. But my Tindering abilities wouldn't be what they are without learning to fly in Mario 3.

Why did Mario move to the country? To eat a lot of Peaches!

What did Donkey Kong say when Mario asked him for help for some schoolwork? "I D K"

After working out for over a year, I successfully dated several girls who always jumped on my couch, saying 'do whatever you want with me'. But unfortunately none of them liked Mario Kart. :(

Today I decided to play Mario as a cat. Because I would get 9 lives instead of 3.

Why did Mario lose a life? He stubbed his MiyamoToe.

Why did Mario find Koopa after he kidnapped the Princess and moved his castle so quickly? Because Koopa forgot to erase his Bowser History.

I didn't learn much from Mario Party 64, but I did learn that... the button mashing and joy stick rotation techniques don't necessarily translate well to the bedroom.

What search engine does Mario use? Yahoo!

The difference between Nick Mullen and the small version of Mario Is about 2 feet, with Nick Mullen being smaller than tiny Mario. Relatively speaking.

What did Mario say when he saw the Alpaca? Don’t-a worry it’s a false-a llama!

When Yoshi gets sick from eating too many goombas, what procedure should Dr. Mario conduct? A Nintendoscopy!

Mario asked me what month it was.. I told him "It's-a May, Mario"

What happens when Mario parks his kart illegally? It gets Toad.

What type of car does Mario drive? A Honda Odyssey. Ba-dum-tsss.

Why was Princess Peach worried when Mario wanted to use her laptop? She forgot to delete her Bowser history

What did Princess Peach say when she’s being saved by her love interest? I think I wanna Mario

Mario takes Peach out for dinner.... They go to a famous Italian restaurant and get settled in to there booth. Luigi walks in and asks if he can sit with them. Mario looks his brother dead in the eye and says "I'm sorry Luigi but there doesn't seem to be mush room".

How do you make peach crumble? Tell her that Mario is dead

Luigi, using a revive mushroom, beat Mario to saving Princess Peach. I guess you could say Mario got 1upped. 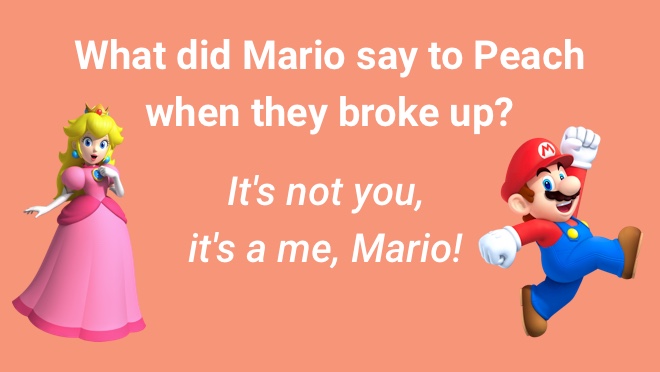 Mario and Luigi go fishing Luigi at one point says: Mario, I see land!
Mario then asks: Are you sure?
And then luigi says: yes, I think I'm a-shore.

Why does Mario prefer to hang out with Toad more than Luigi? Because he's a fungi.

What’s the name of Mario and Luigi’s mother? Mia.

Mario and Luigi got a package in the mail... Luigi opened it, and exclaimed 'it's a Wii, Mario!'