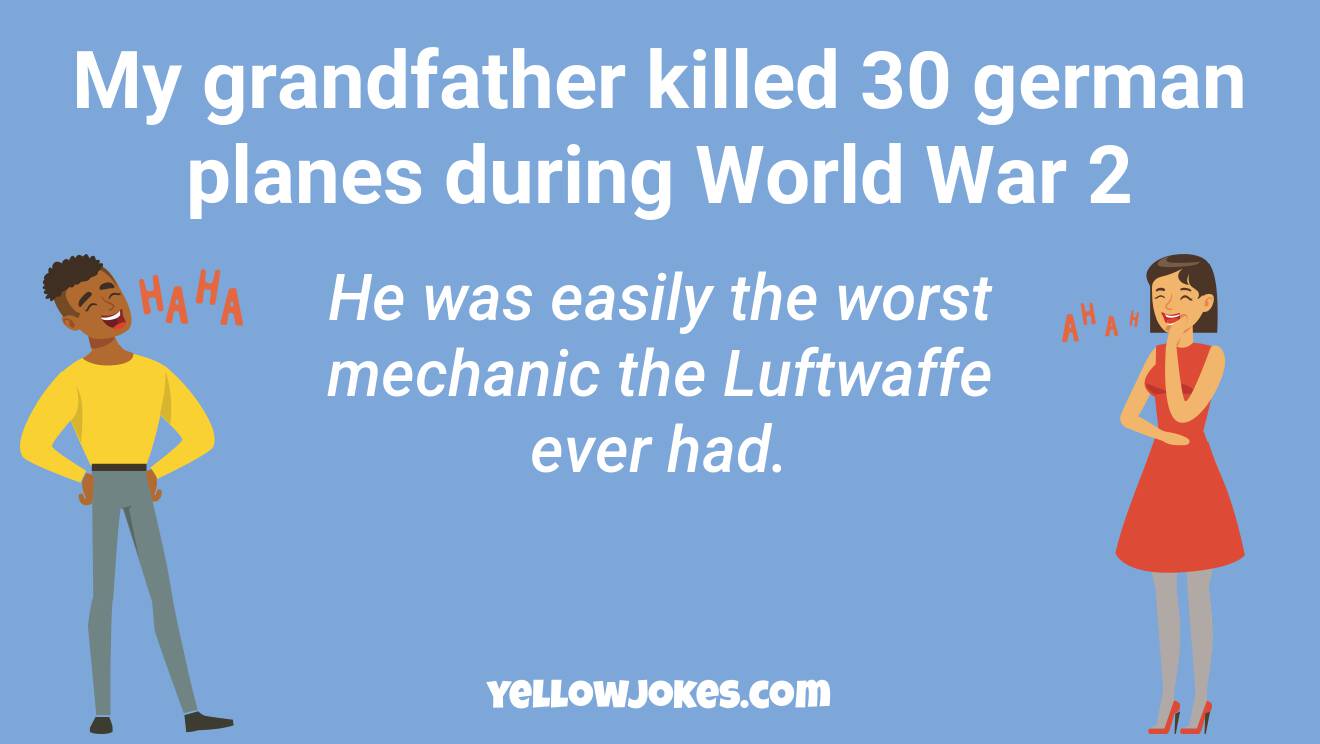 “Son In Iraq I killed 15 people.” Son: Dad, you were a helicopter mechanic.

Dad: Never said I was a good one.

What does a mechanic do for a one night stand? He nuts and bolts.

Did you hear about the unfashionable mechanic? He needed to change attire.

(I'm probably too proud of myself for making this one; someone's almost definitely done it before.)

The mechanic has a look under the car. "Your alignment is off."

My car started making this whining noise... So I took it to the shop and had the mechanic look over it. Turns out all he had to do was take the Taylor Swift album out.


Sorry if this was a repost, I took a quick browse and didn't see it anywhere.

During World War II, my grandpa single-handedly killed 30 German pilots. He was the crappiest mechanic the Luftwaffe ever recruited.

My grandpa destroyed 38 planes in WW2, killed 58 Germans. Literally the worst mechanic of the Luftwaffe

My grandad killed 50 German pilots in WW2 He wasn't a very skilled mechanic.

My grandfather was responsible for 35 downed German planes in WWII. Still to this day he holds the record as the worst mechanic the Luftwaffe ever had.

My father was an Allied war hero. He single-handedly destroyed 4 Messerschmitts, 9 Heinkel bombers, and 11 Stuka dive bombers. He was the worst mechanic the Luftwaffe ever had.

Did you hear about the Large Hadron Collider going down? They are gonna have to bring in a quantum mechanic.

Where does an atom go when it breaks down? A quantum mechanic.

Son in Iraq i killed 20 people. Son: Dad you were a helicopter mechanic.

Dad: Never said I was a good one.

How can you tell if a mechanic has gotten laid? He has one clean finger

MECHANIC: Can I help you?

ME: My car won't start

ME: Because my car won't start, are you even listening?

How can you tell a mechanic has gotten lucky? He's got one clean finger!

Did you hear about the mechanic who was addicted to brake fluid? He said he could stop at anytime.

The local mechanic was arrested for being a drug dealer. I've been his customers for 4 years and I never knew he was a mechanic.

Piece of Dating Advice Do not date a car mechanic if you're looking for a long term partner. Typically, a mechanic just nuts and bolts.

My grandfather was responsible for 49 downed German planes. Still to this day, he holds the record for worst mechanic the Luftwaffe ever had.

Mechanic: "When were your tires last rotated?" Me: "On the way here, silly."

How can you tell a mechanic got laid? He has one clean finger

My grandfather was a World War 2 Vet In a single day during the Battle of Britain he was responsible for the destruction of 8 German aircraft killing 32 German airmen.


Easily the worst mechanic the Luftwaffe had ever had.

A penguin talks his snowmobile in to get fixed. The mechanic takes a look at it and says "looks like you blew a seal." penguin replies "no, that's just frosting on my lip."

What does a mechanic do when he has a one night stand? Screws, nuts, and bolts!

This mechanic in my area went to jail for dealing drugs I've been his customer for over 5 years...I had no clue he was a mechanic.

During WW2 my grandad downed over 35 German planes... He still holds the record as the worst mechanic in Luftwaffe history.

Did you hear about the mechanic who accidentally punctured the wheels of his car? He retired.

What does a mechanic looking for a one night stand do? He nuts and bolts

A penguin takes his car to the shop for maintenance. He goes across the street to a ice cream stand for a vinilla cone. Later he goes back to the shop to check on his car. Mechanic says "looks like you blew a seal". Penguin goes "No, it's just ice cream".

Did you hear about the car mechanic who was in a brief relationship and then left? There was an article in the newspaper.
MECHANIC NUTS AND BOLTS

An eskimo brought his car to a mechanic. Mechanic says, "you blew a seal"
Eskimo wipes his face, "no, I just had some ice cream".

What does a mechanic do at a one night stand? He nuts and bolts.

How do you tell a gamer from a car mechanic? Ask them what HP means.

My mechanic tried to convince me that my car needs new brakes But I know that it would just slow me down.

A photographer and a mechanic have a child After two long days of searching for the perfect name, they name him Cam.

My grandfather was responsible for 35 downed german planes in Ww2 still to this date holds the record as the worst mechanic the Luftwaffe ever had.

What did the overworked car mechanic say... Give me a brake.

A car mechanic went bankrupt in less than a month His repair shop was on the second floor.

My grandad was responsible for 28 German planes going down. Still to this day holds the record as the worst mechanic the Luftwaffe ever had.

What did the mechanic say to the idiot raising his car on cinderblocks? That's jacked up!

Did you hear about the mechanic that left his job to go into retail? He worked with a tyre.

Why did the mechanic powerwash his shocks? Because he wanted to do a little spring cleaning.

What do you call a Amish man with his hand in a horses mouth? A mechanic

Where do you take your time machine when it breaks? To the temporal mechanic

This Inuit fellow takes his snowmobile to the mechanic. He leaves the snowmobile with the mechanic and goes to lunch. When he gets back the mechanic says, "It looks like you blew a seal." The Inuit guy replies, "Naw, that's just a little mayonnaise."

What do you call an Amish person with his hand in a horses mouth? A mechanic

My mechanic thinks i'm in denial over my brake fluid leak. But he's wrong; I can stop any time i want.

What did the pilot say to the Vietnamese mechanic underneath the plane? " "You are the Nguyen beneath my wings"

How can you tell when an auto mechanic jus had sext One of his fingers is clean!!

So I took my car into the mechanic and he said I blew a seal. I said, "well yeah, but how did you know? And what does that have to do with my car?"

I finally decided I want to be a car mechanic. Guess it just took some motor-vation.

She asked if I liked my job after I told her I'm a roller coaster mechanic... "It has its ups and downs," I said.

How do you tell if a homeless man has a girlfriend? It's easy, he's got 2 clean fingers.


You can say mechanic, plumber, welder etc. This joke has versatility, use it wisely.