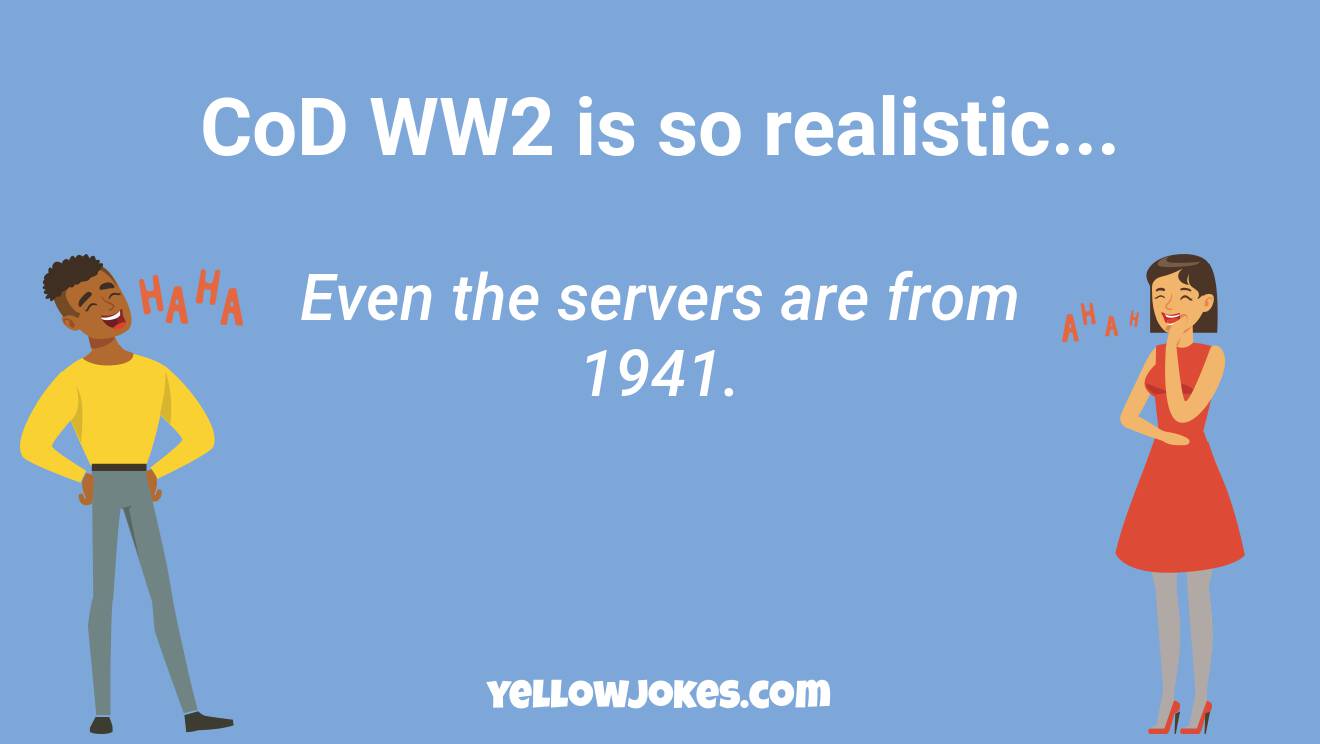 Why do the french have windows at the rear end of their tanks during WW2? So they can see the battlefield

My grandpa destroyed 38 planes in WW2, killed 58 Germans. Literally the worst mechanic of the Luftwaffe

My grandad killed 50 German pilots in WW2 He wasn't a very skilled mechanic.

Selling a french WW2 rifle Never fired, only dropped once.

I have a French WW2 rifle for sale Never been fired, only dropped once.

My grand father fought in WW2. Whenever I bring it up, he says he never wants to talk about it again. What a sore loser

So a French WW2 rifle came up for sale at an auction, the description read... French rifle, never used, dropped once.

Why did Germany lose WW2? Three Reichs and you're out

Why did it take so long for Americans to beat Germany in WW2? They weren't Russian.

Selling French WW2 Rifle in great condition. It has never been fired only dropped once.

During WW2 my grandad downed over 35 German planes... He still holds the record as the worst mechanic in Luftwaffe history.

Post-WW2 Soviet joke \- Who is your mother?

My grandad was responsible for 28 downed german planes in WW2. Still to this day holds the record as the worst mechanic the Luftwaffe ever had.


(From my German dad)

Or would this be better in dad jokes

The fascist, the coward, and the yellow monkey were what the US call their enemy in WW2... ... now that is what they call their president.

My grandfather was treated very badly by the Germans in WW2. Passed over for promotion time and time again.

Why didn't the Soviet Union join WW2 until 1941? They were using Stalin-tactics

What do you call a German stealth WW2 submarine? A not see you boat.

My grandfather lost his tongue during WW2 He never talks about it.

That Military Documentary series on Japan in WW2 was really good... ...Unfortunately it never survived past the Pilot episode.

My grandfather served in WW2 during the liberation of France One day I asked him “ Did you ever kill anybody?”.

He goes silent, looked me deep in the eyes and said “probably, I was the cook”

How did the Scandinavian countries communicate during WW2? Norse code

How did Germany raise its GDP pc. during WW2? Reduce the capita

What's Long and Hard and full of seamen? The Pacific theatre of WW2!

What does an American ww2 veteran say when you ask him if he wants some tea? Sherman tanks!

My grandfather was his army battalion's mime during WW2. He doesn't like to talk about it.

In history class we got to read on a WW2 topic of our choice. I chose the Manhattan Project. I heard it was the bomb.

WW2 Joke So, two Germans walk into a B.A.R

My grandfather was responsible for 35 downed german planes in Ww2 still to this date holds the record as the worst mechanic the Luftwaffe ever had.

A German airman on the air forces during WW2 If you see a white plane, it's American; if it's black it's RAF (Royal Air Force). If you see no planes at all, that's the Luftwaffe.

What was the German Army's favorite breakfast during WW2? Luft-waffles.

What did German troops play during WW2? Nazee!