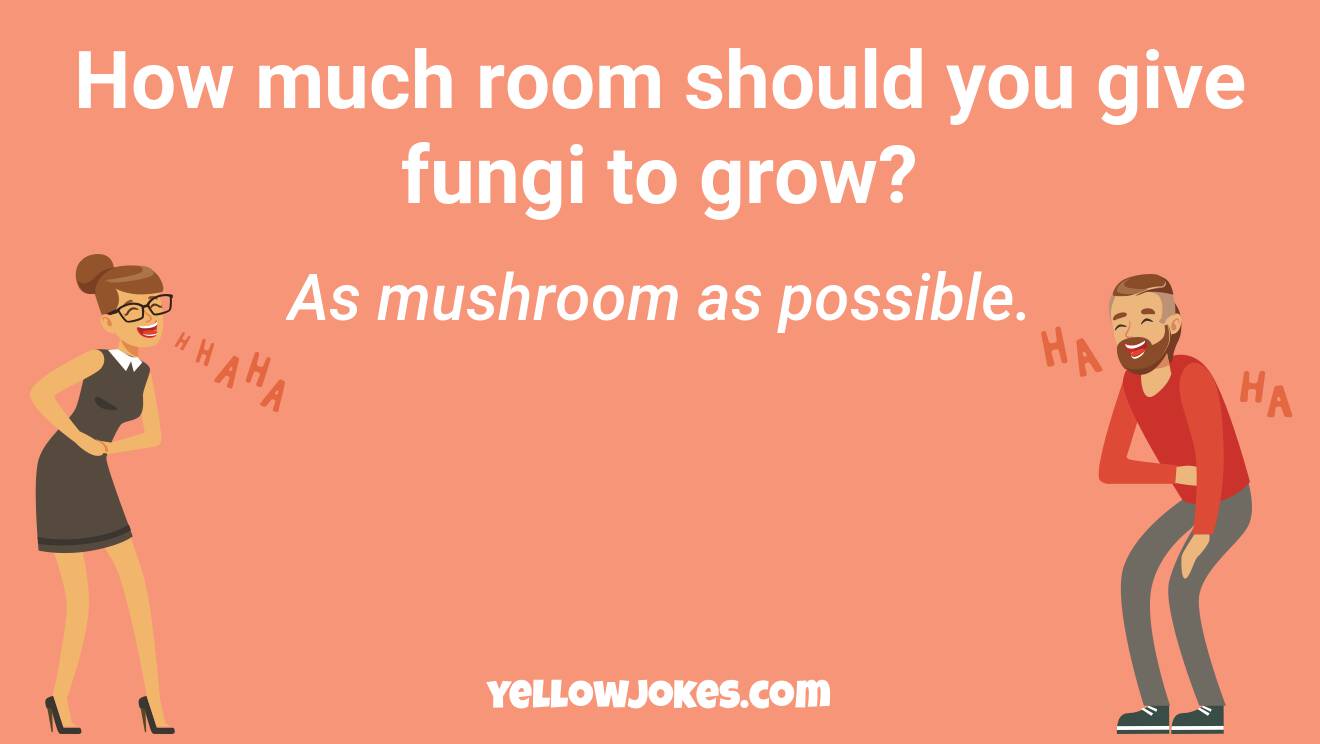 Why don't fairies live under toadstools? Because there's not mushroom!

So a mushroom walks into a bar. Bartender says "We don't serve mushrooms here. You're always ruining jokes." The mushroom says "Come on. I'm a nice guy."

What did the claustrophobic fungi say to his friends? There's not mushroom in here

How much room is needed for fungi to grow? As mushroom as possible

How much space do you need for a fungi to grow? As mushroom as possible.

How much room is needed for a fungi to grow? As mushroom as possible.

I can't put anymore toppings on my pizza... There's not mushroom

In Soviet Russia policeman questioning a man: *This body is your mother in law, yes?*

**She was refusing to eat them**

Why did the mushroom go to the party? 'Cos he's a fungi!

Why didn't he get in?

How much room does fungi need to grow? As mushroom as possible.

How much room do you need to grow fungus? As mushroom as possible.

What kinda room has no doors and no windows? A mushroom.

So broccoli was having a conversation with some of his friends... The broccoli said: "I look like a tree!"

The banana said: "Can we please change the subject?"

So----A mushroom walks into a bar the bartender says, "Hey! no mushrooms. Get out." The mushroom says, "Hey, what's the matter? I'm a fun guy."

What do you call a mushroom with a 12 inch stalk? A fungi to go out with

Why does the mushroom always get invited to the party? Because he's a fungi!

A mushroom walks into a bar... The bartender says, "We don't serve vegetables!"

The mushroom responds, "But I'm a fungi!!"

Every cloud has a silver lining... ... unless it's a mushroom cloud. Then it's likely strontium.

Classic Why'd the mushroom go to the party?

Cause he's a fungi!

Why'd the fungi leave the party?

Cause there wasn't mushroom!

Why wouldn't the frog lend his hammer to the mushroom? Because it's a toad's tool.

How much room does a fungi need to grow? As *Mushroom* as possible!

My first wife died... after eating a poisoned mushroom!

My second wife died of a poisoned mushroom!

My third wife died of a crushed skull.

She wouldn't eat the mushroom!

Why was the mushroom the life of the party? Because he was giving out free cocaine

A mushroom walks into a bar and sidles up to a stool. Bartender: “You’ll need to leave. We don’t serve your kind here.”

Why did I invite a mushroom to my cake day party? Because he was a fungi

Why did the girl invite the mushroom to the school dance? Because he was a Fun-gi

Mario games are unforgiving... ... there's not mushroom for error

How much room do you need to grow a fungus? As a mushroom as possible

Broccoli: Hey, I look like a tree. Mushroom: Wow, I look just like an umbrella.
Walnut: I look exactly like a brain.
Banana: Man, can we change the topic please?

What is a mushroom in a tent? A Campingon.

Hey, you see that mushroom over there? You should date him, he's a Fungi

Why did everyone invite mushroom to the party? Because he's a fungi.

Who do you hang out with, a strawberry, a celery stick or a mushroom? The mushroom because he's a fungi.

What did the vegans say when they were captured and put into a small space? Kelp! Lettuce leaf! There isn’t mushroom in here...

Why did the Fungi leave the party? Because there wasn't mushroom

I was going to grow a fungus farm in my backyard but there wasn't mushroom.

People often make fun of me for having a mushroom as a friend, their loss though... He's a fungi

A mushroom finds a boy Mushroom:so I met this guy

Once a nuclear bomb was dropped on Ethiopia. 1 million people died from the explosion, 2 million died running towards the mushroom.

Why couldn’t the mushroom move? It had osteosporeosis

Second one died of fractured skull

…She wouldn't eat her mushroom.

Just bought myself a new pair of headphones which have a weird fault. In the left ear it’s saying “chicken and mushroom” and in the other ear it keeps repeating “steak and onion.” That’ll be the last time I buy anything from Pioneer.

How much room does it take for fungi to grow? As Mushroom as possible!

Why do fungi grow together? Because they don’t have ...mushroom.

Luigi, using a revive mushroom, beat Mario to saving Princess Peach. I guess you could say Mario got 1upped.

I had fun playing with Mr. Mushroom yesterday He was a fun gi

Did you hear about the new mushroom comedian? Yeah he’s a pretty fun guy.

A young couple goes cloudwatching The girl points a cloud, and she says, "Oh! I see a giraffe!"

The boy points at another, "Yeah? I see a mushroom!"

How much room do you need to grow a fungus? As mushroom as possible.

If I were a kleptomaniac mushroom, I would be called..... A "shiitake" mushroom.

Did you hear about the sketchy mushroom vendor? He has no Morels

I made myself a mushroom omelet this morning. It was a breakfast of champignons.

Why wasn't the fungi let into the party? There wasn't mushroom

What did one mushroom say to the other? "Dave, for the millionth time! You are not a freaking mushroom! No more drugs for you!"

Why did the fun guy leave the party? There wasn't mushroom.

Why did the Fungi leave the party? There wasn't mushroom.

Why was the mushroom laughing so much? Because he is a fun guy!

So a mushroom walks into a bar, bartender immediately kicks him out The mushroom replies "why are you kicking me out? I'm a fun-gi"

A mushroom walks into a bar... The bartender says: "We don't serve your kind here"
The mushroom responds: "Why not? I'm a fungi!"

What did one mushroom say the to the other? You're a really fungi

What did the mushroom say when he wasn't invited to the party? Oh come on I'm a fun guy.

Why was the mushroom invited to all the parties? Because he was such a fungi

What do you call a trash talking mushroom? Shittalki

Why can't you invite two fungi to a party? They take up two mushroom.

What do you call a room with no walls, no windows and no door... ...A Mushroom

Why did everyone want to hang out with a mushroom? Cause he was a fungi.

How do you tell the gender of a mushroom? It's either a fungi, or fungal.

Why was the mushroom invited to the party? He was a fungi

Why is the Mushroom Invited to All the Parties? Because he's a fungi!

A mushroom walks into a bar.... Bartender says "sorry sir we don't serve your kind" mushroom says "why.... I'm a fungi"

What's the problem with eating mushrooms? They don't leave mushroom for anything else

Different foods were talking to each other, Broccoli: Hey, I look like a tree.

Why did the Shitaki left the party? It was too crowded and there wasnt mushroom.

What kind of room has no windows or doors A mushroom