At the pharmacy I asked for 50 condoms. 2 girls behind me started laughing. I turned around, looked them straight in the eyes and said, "Make that 52."

A man using Apple maps walks into a bar Or a pharmacy, or maybe a shoe store.

"I can't serve you that"

A man goes to the pharmacy to buy condoms. The pharmacist asks: Do you need a bag?

He answers: She isn't that ugly!

The itch from poison ivy is so bad that I just spent hundreds of dollars buying every possible cream and ointment at the pharmacy. I need to quit making rash decisions. 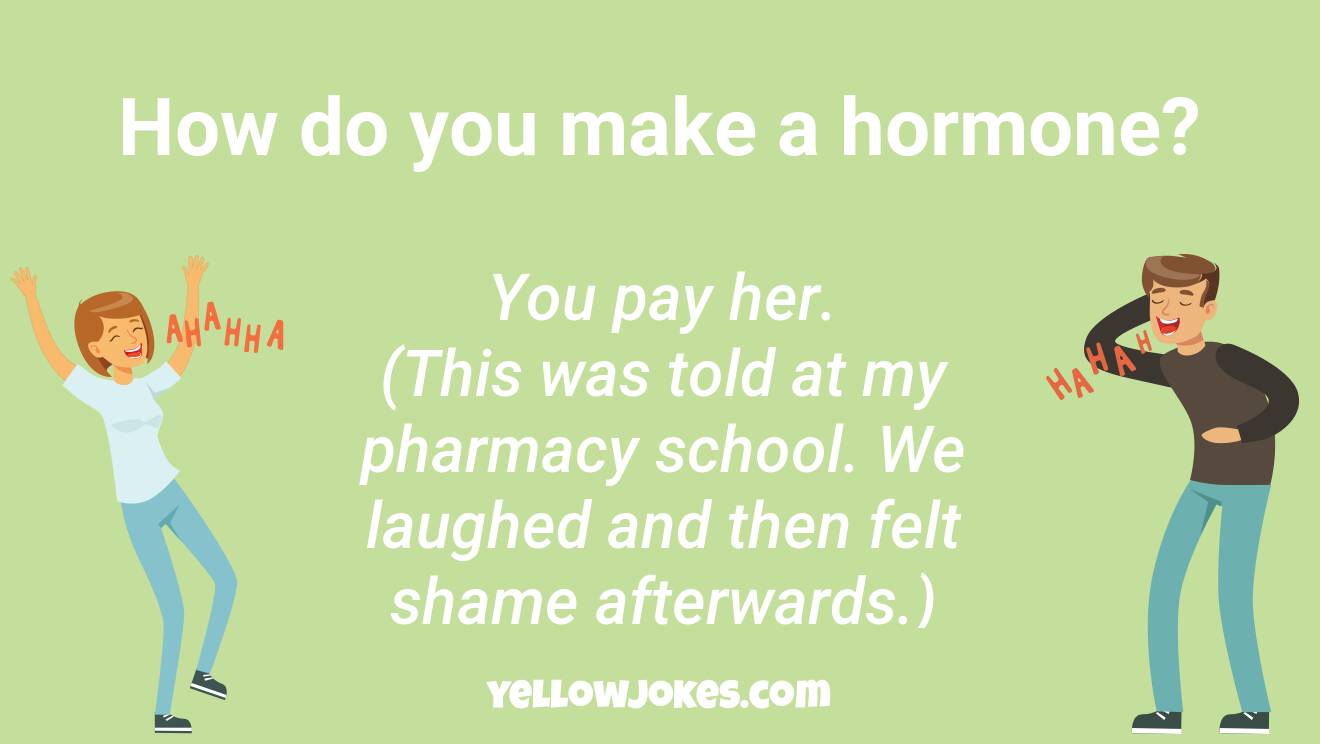 A guy enters the pharmacy... Guy: 5 packs of condoms please.

Cashier: Do you need a bag with those?

Russian pharmacy Doctor: This medicine is from insomnia, this one is from nervous break-down, and also take this one from depression.

Patient: Thank you very much, doctor, but do you have any other medicine besides vodka?

A woman walks into a pharmacy and asks the Pharmacist, "Excuse me, do you have cotton balls?" The pharmacist replies, " Ma'am, if I did, my kids would be stuffed animals."

A guy stops in at the local pharmacy to buy condoms. That will be twelve fifty with tax.
Tax he exclaims!!! don't these things stay on by themselves???

I just got a job at a pharmacy. The pay isn't great... But the percs are amazing!

I went to the pharmacy this morning and asked for 50 condoms. The girl winked at me and said, "Oh, someone has a busy weekend ahead of them!"

So I went to the pharmacy the other day I went in and bought a box of condoms.
The cahsier asked me whether I wanted a bag?
I said no thanks, she's not that ugly.

A Duck walks into a pharmacy. He tells the pharmacist “I’d like to buy a box of Chapstick.”.
The pharmacist replies, “OK, how would you like to pay for this?”
The duck says “Put it on my bill.”.

So a duck walks into a pharmacy... and asks the pharmacist, "Do you have any chapstick?" When the pharmacist hands it to him, the duck replies "Thanks, just put it on my bill!"

If marijuana starts getting sold in a grocery store... Would it be in the pharmacy or the baking aisle?

Pharmacy A man walks into a pharmacy - "Id like 3 packs of condoms please".

The pharmacist - "Here you go sir, would you like a bag".

Man: "No thanks, the girl is good looking".

A guy walks into a pharmacy and buys a pack of condoms. The cashier asks him if he wants a bag. He responds, "No, she's not that ugly."

One evening, a dad joke came home late from the office. He and your mom joke got a little drunk after dinner and since the pharmacy was closed, well, lewd story short, that's how they ended up with a pun in the oven.

My doctor prescribed me a new medication. It’s called Fukitol. Unfortunately, the pharmacy had none left to give.

I went to the pharmacy to get 50 condoms, behind me were two girls giggling... Then I looked at the pharmacist and told him "52".

An old lady walks into a pharmacy \- I would like to buy a pack of acetylsalicylic acid.

My pharmacy is having a liquidation sale. Laxatives are 50% off.

Today at the pharmacy I saw a woman without a face mask buying a pregnancy test. She clearly isn’t a fan of protection

Old Texas cowboy in a pharmacy Cowboy: "Give me three packets of condoms, please."
Cashier: "Do you need a paper bag with that, sir?"
Cowboy: "Nah. She ain't that ugly.

(Nerd joke warning) What do you call a pharmacy that *may* exist? An hypothecary

Police were chasing two robbers ...who ran into a pharmacy jumped on to a scale and got a weigh.

Today, I went to a pharmacy and asked for a box of condoms. The girl serving me asked me if I wanted a bag with it but I said, "No, thanks. She's actually quite pretty."

Amazon just launched their new pharmacy service! They were going to call it Jeff's Benzos, but that name got axed pretty quickly.

Where do farm animals get their groceries? The pharmacy.

Why are there no pharmacy stores in Africa? Because you’re not supposed to take medicine on an empty stomach.

An odd look... Came to the counter of the pharmacy with a box if condoms... Person ringing me up gave me a quick odd look.... I caught it and said "oh, it's not what you think... I'm a drug mule"

The clerk replies "Do you need a bag"

My local IKEA store has opened up a pharmacy in it... I bought some suppositories from it but had to put them up myself.