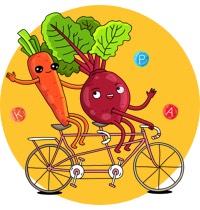 
credits to Adele Cliff, from the Edinburgh Festival Fringe. Link in the comments

I trapped a couple of vegans in my basement. At least I think they're vegan. They keep shouting 'lettuce leaf!'

My girlfriend really changed after she became a vegan. It's like I've never seen herbivore. 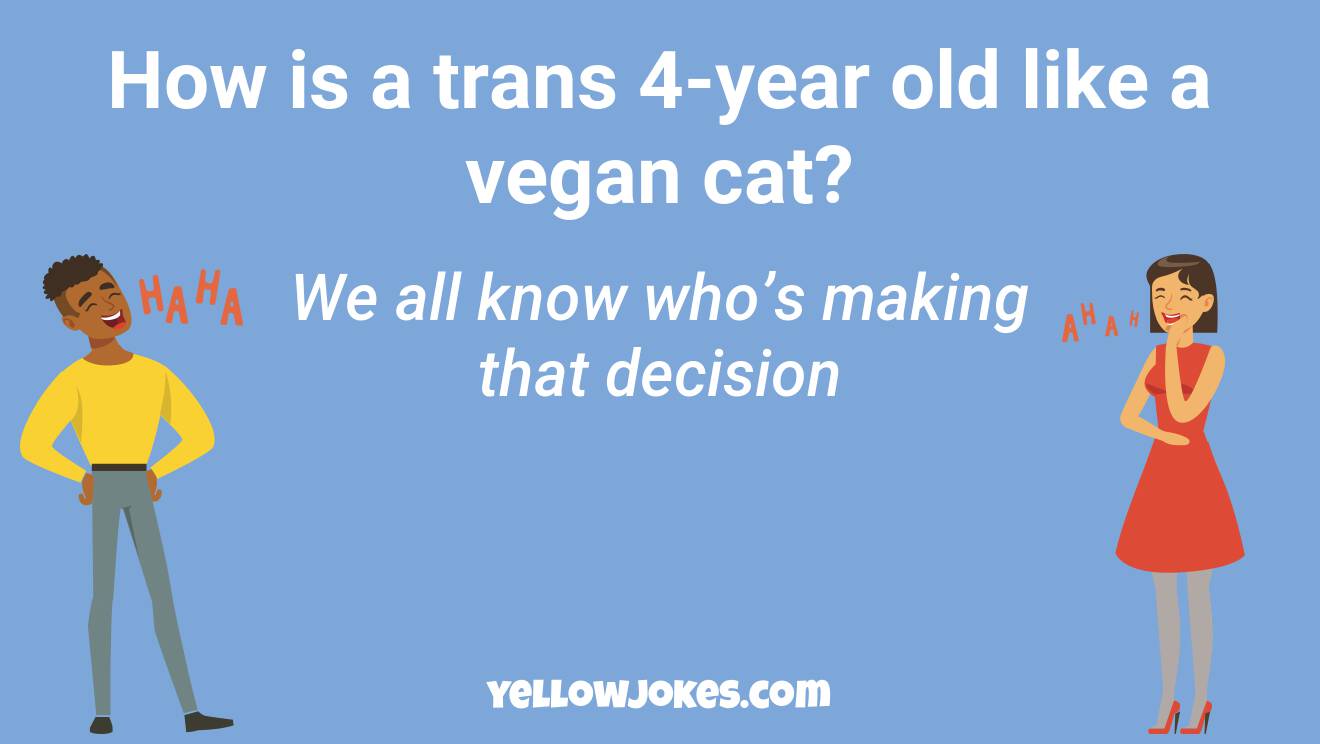 What's the toughest part of being a vegan? Apparently keeping it to yourself.

An atheist, a vegan, and a crossfitter walk into a bar I know because they told me.

Yo momma is so vegan and fat... ..that she ate a meal and got arrested for deforestation.

Did you hear about the vegan transgender? He was a herbefore.

An atheist, a vegan, and a crossfitter walk into a bar... I only know because they told everyone within two minutes.

What's the hardest part of making a vegan pizza? Skinning the vegan.

My girlfriend changed a lot after she became vegan... It's like I've never seen herbivore.

What’s the toughest thing about being a vegan? Apparently, keeping it to yourself.

Why did the vegan cross the road? To tell someone he was a vegan.

A stranger just came up to me and told me she was vegan... I swear I've met herbivore

So I met a vegan. I'd finish the joke, but she's still talking.

First rule of Vegan club: You tell everyone about Vegan club.

Have you guys heard the one about the vegan transgender? He was a her-before

My girlfriend changed a lot since becoming a vegan It's like I've never seen herbivore.

My brother's girlfriend is vegan I haven't met herbivore.

An atheist, vegan, and crossfitter walk into a bar I don't know what happened because I left

Show me a man who calls himself a vegan, ...and I'll show you a man who's trying to shag a vegan.

I have a vegan girlfriend... and she's nice and all, but sometimes I think she just looks at me like a piece of carrot

A vegan, feminist and a famous rapper walk in a bar I only knew because they told me 10 times.

If someone is a vegan and does CrossFit... Which do they have to tell you first?

A vegan, a girl with a boyfriend and a student walk into a bar.. Who tells you first?

What do you call a vegan lion? Dead

A crossfitter, an atheist, and a vegan walk into a bar I only know because they told everyone.

Q: What do vegan zombies eat? A: "GRAAAAAIIIIIIIINS!"

My friend is so vegan, he won't even have his picture taken because he'd have to say cheese.

What's a dilemma for an atheist vegan? What will they tell you about first??

What's the difference between being vegan and having Covid 19? With Covid the loss of taste is only temporary...

A vegan told me people who sold meat were disgusting. I said people who sell fruit and veg are grocer.

What do vegan gluten-free people miss the most? Friendship

What does a kinky vegan say? Artichoke me.

Ok so I’m actually putting a joke on here this time. A vegan, a Anti vaxxer and a Athiest wall into a bar


I only know because they told everyone in the first 2 minutes :/

I was on a vegetarian diet then I switched to vegan. The lack of protein in their diets make them a lot easier to catch

What does a vegan zombie moan? graaaiins...

I met a vegan magician the other night who surprised everyone by making guacamole appear from thin air. Avocadabra.

What is the difference between a vegan on a diet and a flower child? One's a very thin person, and the other is a little hippy.

A vegan, an Italian and a Prius owner walk into a bar. I know this because they told me when they walked in the door.

"You like that meat, you MURDERER?" said my vegan girlfriend I just wish we could have one dinner without her reminding me of the time I shot her mom in the head

A vegan walks into a bar I only know because he/she told everyone within two minutes.

Why did vegan cross the road? To tell chicken he is a vegan on the way

An atheist, a Crossfitter, and a vegan walk into a bar. I know because they told me.

A vegan and crossfitter walks into a bar. I only know this because they started telling everyone within minutes of arriving.

What do you call a vegetarian Viking A nor-vegan!

Not sure which is the harder part about being vegan The discipline and focus it takes to eat that way, or the time and energy it takes to tell everyone you're a vegan.

An atheist, a vegan, and a cross-fitter walked into a bar. I know because they told everyone within the first two minutes.

If 2 vegan rappers are dissing each other... Is it still considered having a beef?

Lions are strictly on a vegan diet. They consume about 10 to 15 pounds of vegans a day.

Two cows walk into a vegan restaurant. The waiter says, "We don't serve your kind here."

You could say that going vegan... is a huge missed steak.

What does a vegan zombie eat? Grrrrraaaaaaaiiiinnnnnnsssss!!!!
(Rip George A Romero)

An Atheist, a Vegan and a Vaper walks into a bar... I only know because they told everyone within two minutes -_-

How do you tell if someone is vegan? They tell you.

An Atheist, a Feminist, and a Vegan walk into a bar. I know because they made sure everyone did.

I would go vegan but I'm not willing to get up at 4am to milk the almonds.

A vegan, a Mensa member, and a guy who doesn't own a TV walk into a bar. How do we know this? Because they told everyone.

How do you kill vegan vampires? With a steak to the heart.

How come Jeff Bezos spending 13 billion makes the news? I spent 13 billion dollars last week at Whole Foods as well and all I got was some vegan avocado toast.

A Vegan who is also gluten intolerant walks up to you. What is the first thing they say to you? "I crossfit"

What do you call a vegan blind date? A taxi.

What do vegan zombies crave? Graaaaaains!

An athiest, a vegan, and a CrossFit coach walked into a bar I know because they told me.

"What do you know about vegan cookies?" Just that they're only margarinely better.

What kind of magic does a vegan wizard use? Soycery

What does a vegan zombie eat? Grains!

How do you know if a dead baby is vegan? Don't worry, the parents will tell you.

I am a social vegan I avoid any meet.

You know whaf the worst part about being vegan is? Getting up at 4am to milk the almonds

A vegan club is the worst place for social activity. It's impossible to meat people there.

A crossfitter, a vegan, and a trump supporter walk into a bar I only know because they told everyone who was there.

How can you tell if someone is vegan? They'll tell you

A crossfitter, a Texan, and a vegan walk into a bar. How do you know? They all tell you within 3 seconds.

How do you know if a complete stranger is vegan? They already told you.

An atheist and a vegan walk into a bar... The only reason I know this is because they both told everybody.

A vegan, a runner, and a stoner walked into a bar They all told me in the first minute.

I try so hard not to upset my vegan girlfriend. I'm constantly treading on eggshells.

Which she also doesn't approve of.

A girl next to me in the trai sneezed. Me: bless you
She: I have a boyfriend

A few rows behind us : I'm vegan

A vegan, a vaper, and a Pitbull owner walk into a bar... ...I'd tell you what they said but I have no idea because none of them would shut up.

The truck stops and the driver asks, "What can I get you today?". "Oh, nothing. I just wanted to let you know I'm a vegan."

A vegan, a gap year student and a girl with a boyfriend walk into a bar Who tells you first?

What does a vegan ghost eat? Supernatural food.

What's the worst part about going down on a vegan? They taste like chicken.

An atheist, a vegan, and a marathon runner walk into a bar... I only know because they told everyone within two minutes.