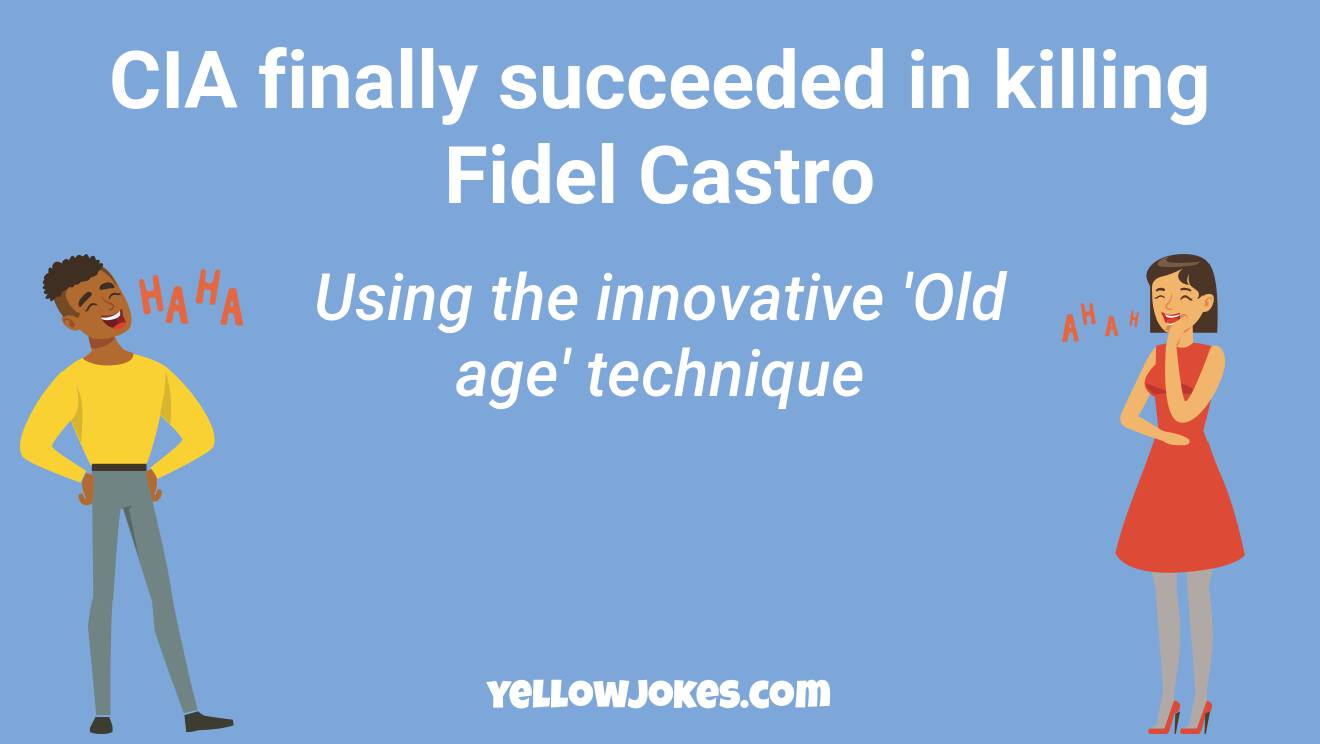 If Abraham Lincoln were alive today, what would he be famous for? Old age.

The secret to having a smoking hot body in old age? Cremation.

What's the only thing in Australia that won't kill you? Old Age

Regular naps prevent old age, especially if you take them while driving.

An 80 year old couple are talking with each other "I've heard your memory is the first to go in old age," says the old man.

"I've heard your hearing is the first to go," says the old woman.

Humans are like grapes... Grapes are green or purple, and a human has colors too. A grape is picked, and eaten by a human. Then we die of old age. I'm not good with metaphors.

A mugger approaches an Irish man He points his gun and says, "Your money or your life!"

The Irishman replies, "Take me life. I'm saving me money for me old age."

If George Washington were alive today, what would he be famous for? Old age!

Don't worry about old age. It doesn't last that long.

A gorilla dies of old age at the zoo. His name wasn't Harambe.

They say you shrink when you get older My grandma lost a foot in her old age, but i think it had something to do with diabetes.

In my old age, I am like a fine wine... Fifteen percent alcohol by volume.

What's the biggest advantage of being a smoker? Not having to set aside money for your old age.

After the last few died of old age, the Christian Congregation decides to take on some younger ministers They're moving onto greener pastors

Old age You know you are getting old when you have a party and the neighbours dont even realise it.

My grandma got her foot amputated because of diabetes. Seeing her like this reminds me that no one can escape old age. especially if you have one leg.

That building is so tall... that if you jumped from the roof, you would die of old age.

They say you shrink when you get older. My grandma lost a foot in her old age, but I think that was more so due to the gangrene.

In my old age I may have developed alzheimer's But at least I don't have alzheimer's.

Old age homes suck people are dying to get out of there.

I’ve definitely started to like the dentist more in my old age. “thisargfhtthooswagjk” is always the right answer.

Mother in Her Old Age My mother's gotten to the point in her life where she's going on about who has just died.