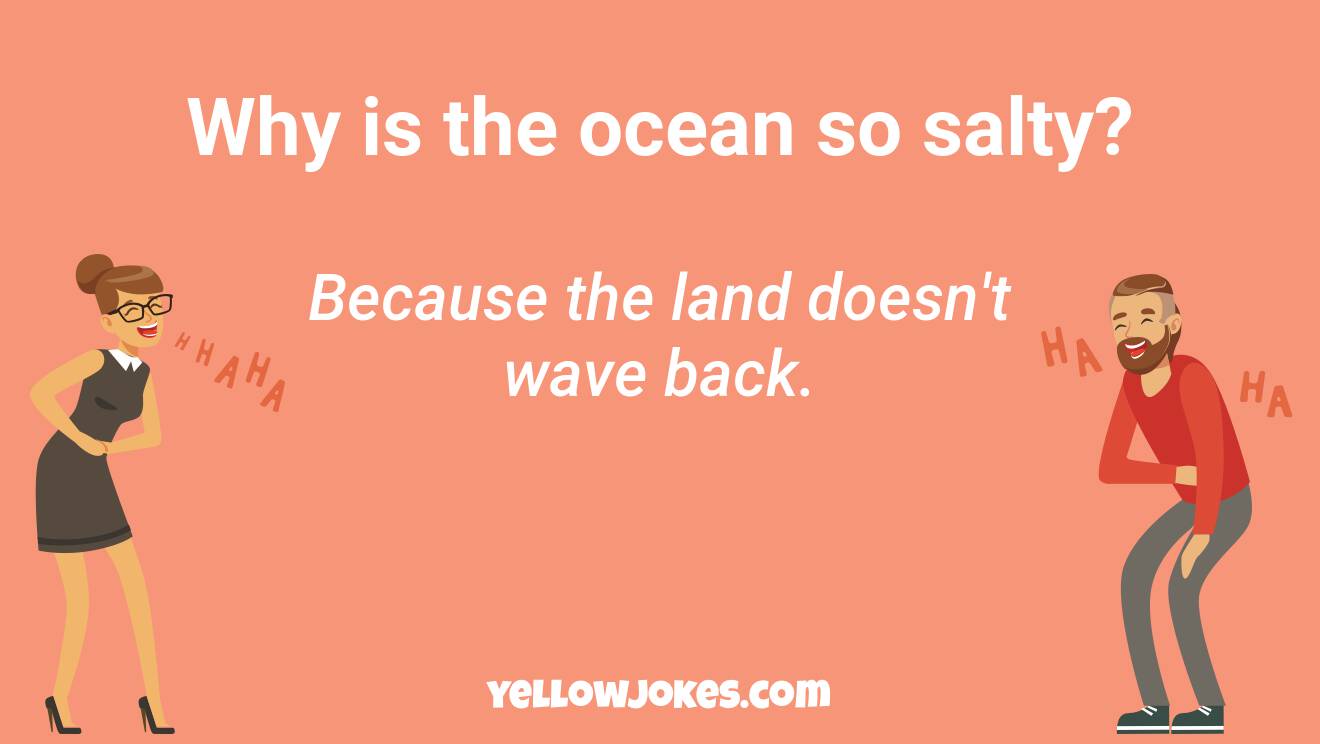 I dreamed I drowned in an ocean made of orange soda. When I woke I realized it was just a Fanta sea.

I once had a dream that I was swimming in an ocean of carbonated orange juice. Thankfully it was just a fanta sea.

What's the difference between a buoy and my ex girlfriend? A buoy can be found above the ocean's surface.

So my girlfriend got a new tattoo...... Of a seashell located on her inner thigh, and the best part is if you place your ear next to it you can smell the ocean.

Why did the hippie drown in the ocean? He was too far out.

My wife recently got a seashell tattooed on her thigh. When you put your ear close to it, you can really smell the ocean.

My girlfriend has a tattoo of a conch shell on her inner thigh. When I put my ear to it, I can smell the ocean.

It's not the size of the ship, nor the motion of the ocean... It's whether or not the captain stays in port long enough for all the passengers to get off.

There are three men in a boat in the middle of the ocean with four cigarettes, no lighter or any matches. What do they do? They throw one of the cigarettes overboard and the whole boat becomes a cigarette lighter.

My girlfriend has a tattoo of a sea shell on her inner thigh.

If you put your ear to it, I swear you could smell the ocean.

I used to think an ocean of soda existed. Turns out it was just Fanta sea.

What shakes and sits at the bottom of the ocean? A nervous wreck.

My Ex had a tattoo of a seashell on her inner thigh If you put your ear to it you could smell the ocean.

What sits at the bottom of the ocean and shakes? A nervous wreck!

My girlfriend has a seashell tattooed on her inner thigh. If you put your ear to it, you can smell the ocean.

Where are you only allowed to swim if you have red hair, a lip piercing, three brothers, a missing finger, are slightly overweight and have a birthday in december? The specific ocean.

A woman is walking along a beach when she sees a man splashing around feverishly in the ocean. "Help, shark! Help!" he cries.

The woman laughs, because she knows the shark will never help that man.

Did you know there are more planes in the ocean.. Than submarines in the sky?

Why is the bottom of the ocean so dark? Black people can't swim.

A father and son go fishing... Son: Dad, what do we do first?

Father: We get this clickbait here and we throw it into the ocean.

Son: Then what happens?

Father: What happens next will shock you.

One of my dad's favorites about flying "You know there are more planes at the bottom of the ocean than submarines in the sky. They have never left one up there."

Why is the ocean so salty? The land never waves back.

So I dragged off this girl from the bar the other night... She had this cool tattoo of a seashell on her inner thigh. Damnedest thing, though! When I put my ear to it, I could smell the ocean.

Why is the ocean salty? Because the land never waves back.

Why is the ocean salty? Because the land never waves back


(I apologize greatly if this had been posted before)

Why is the ocean so salty? Probably because the land doesn't wave back.

My girlfriend got a tattoo of a conch shell on her inner thigh... Every time I lay my ear on it I can smell the ocean.

If I lie there long enough, I get crabs on my forehead.

A blonde gets a tattoo... ...On her inner thigh of a conch shell.

Friend: Why did you get a conch shell tattoo on your inner thigh?

Blonde: So that when you put your ear against it you can smell the ocean.

What do you call a sea that prefers the temperature outside to be between 31.2 °C and 33.1 °C? The Specific Ocean.

America is a country which produces citizens who will cross the ocean to fight for democracy... But won't cross the street to vote.

I’m in Ocean Beach and a homeless man just told me this joke. Why didn’t the lifeguard save the drowning hippie?

He was too far out.

Why was the fish at the bottom of the ocean? Because he dropped out of school.

Deep at the bottom of the darkest trench off the ocean lives the most feared sea monster to ever exist. The Kraken, Urbutt.

How do you escape?

"Tell the sharks that you are a fisherman 🦈"

What does Cardi B and the ocean have in common? Both are filled with trash, and may knock men out.

Why is the ocean always salty? Because nobody waves back

What is an ocean-excavator’s favorite musical note? C minor

what do you call a sea of hot dogs? frank ocean.

I saw a shark swimming by itself in the ocean... ...I tried to lure it to me with some meat I had on board. It did not seem intrigued and just swam away.

I guess it was just a low-interest lone shark.

What was the real reason the Titanic broke in two as it sunk into the ocean? TO SHOW YOU THE POWER OF FLEX SEAL, I SAWED THIS BOAT IN HALF!!!

What do you call a melon in the ocean? Watermelon.

Once a ship got stuck in the ocean. A sailor comes to the captain and asks:

-Captain, do you know where are we heading?

-Off course, my boy!

Why did Hitler love the ocean so much? Because it's Not Sea ....

Does the beach wave back when the ocean waves? No, but it appreciates the sediment.

How did the hockey match end between the ocean and the moon? It was tide.

Why is the ocean so salty? Because people just started to comment on its new YouTube channel.

What is it called when a basketball player from Boston attacks you in the ocean? A Shaq attack

What lies at the bottom of the ocean and shakes? A nervous wreck.

Why did the whale cross the ocean? To get to the other tide.

What kind of expression does a person who fell asleep by the ocean have? Resting beach face

Salty Ocean... Is the ocean salty because land didn't wave back 🤔

Why did the dolphin cross the ocean? To get to the other tide.

Why does the ocean roar? If you had crabs all over your bottom, you'd roar too.

A patient of mine told me this joke today... gotta love working in hospice ☺️

Did you hear about the guy who drowned in an ocean of grape juice? He tried swimming to shore but his efforts were fruitile.

What did one ocean say to the other? Nothing. It just waved.

A clownfish swims into an underwater ocean bar. If you're reading this, you've been in a coma for almost 10 years now. We're trying a new technique. We don't know where this message will end up in your dream, but we hope we're getting through.

Why couldn't the ocean mage cast a spell? He forgot to drink his manatee.

The US Navy is starting to worry about the North Korean military. Since all the missles they launch at Washington end up hitting the ocean, the odds are they will eventually hit a ship.

My girlfriend got a tattoo of a seashell on her inner thigh, If you get close enough, you can smell the ocean.

Which ocean? Could you be more Pacific?

In light of the latest North Korea missile failure... America is no longer their greatest enemy...

The Ocean, however, is!

They're now growing marijuana underneath the ocean I guess they'll call it..."sea-weed"!

Why is it difficult to lie about the name of ocean front cliffs? It's easy for people to call your bluff.

What did the ocean say to the other ocean? Water you doing?

What did the ocean say to the beach? Nothing, it just waved.

No need to get salty. It's just a pun aboat the ocean.

Why does the ocean smell bad? Because the seaweed

What had 8 legs and lives in the ocean? 4 bodys chained to a brick.

What's the worst part about America dumping tea in the ocean? They put the milk in first

California is just too far left, for my tastes. I mean c'mon, the Pacific Ocean is right there.

My grandma once told me an inspiring quote about the ocean I can't remember exactly how it went. I just remember it being very deep

Anyone hear about the ocean full of dicks? It was a phallus-sea.

You throw a red rock into the blue ocean, what does it become? Wet. The rock becomes wet.

I wonder if.. What if the ocean is salty because the land never waves back?

Thanks to World War I There are now more airplanes in the ocean than their are submarines in the sky.

What did the ocean said to the shore? Nothing, it just waved.

What did one ocean say to the other ocean? Nothing they just waved.

Did you sea what I did there?
I'm shore you did.

What happens when you throw root beer in the ocean? Root Beer Floats!

Why is the ocean always salty? Because the land never waves back.

Why was the ocean so cranky? You'd be cranky too if you had crabs on your bottom.

If a fish died in the ocean... ...does it become a marine corpse?

Trump and Hillary fall into an ocean. Who will be saved? America.

I was listening to music and dropped my computer into the ocean... Guess now it's A Dell Rolling in the Deep

What lies on the bottom of the ocean and shakes? A nervous wreck.

You're in the middle of the ocean and you see Trump and Hillary drowning but you only have room in your boat to save one. Who do you save? America. Keep right on going and don't stop.

A blonde gets a tattoo... On her inner thigh of a conch shell.

Her friend asks "Why a conch shell, and why there of all places?"

"So that when you put your ear against it, you can smell the ocean."

what do you call a crab who will do anything to survive in the ocean? a shell out