Who shaves every hour everyday and still has a beard? The barber

Who can shave 25 times a day and still have a beard? A barber.

I used to know a guy who shaved around six or seven times a day and still had a beard at the end of the day He was a Barber.

I was invited to a party and was told "dress to kill" Apparently a turban, beard, and a backpack wasn't what they had in mind 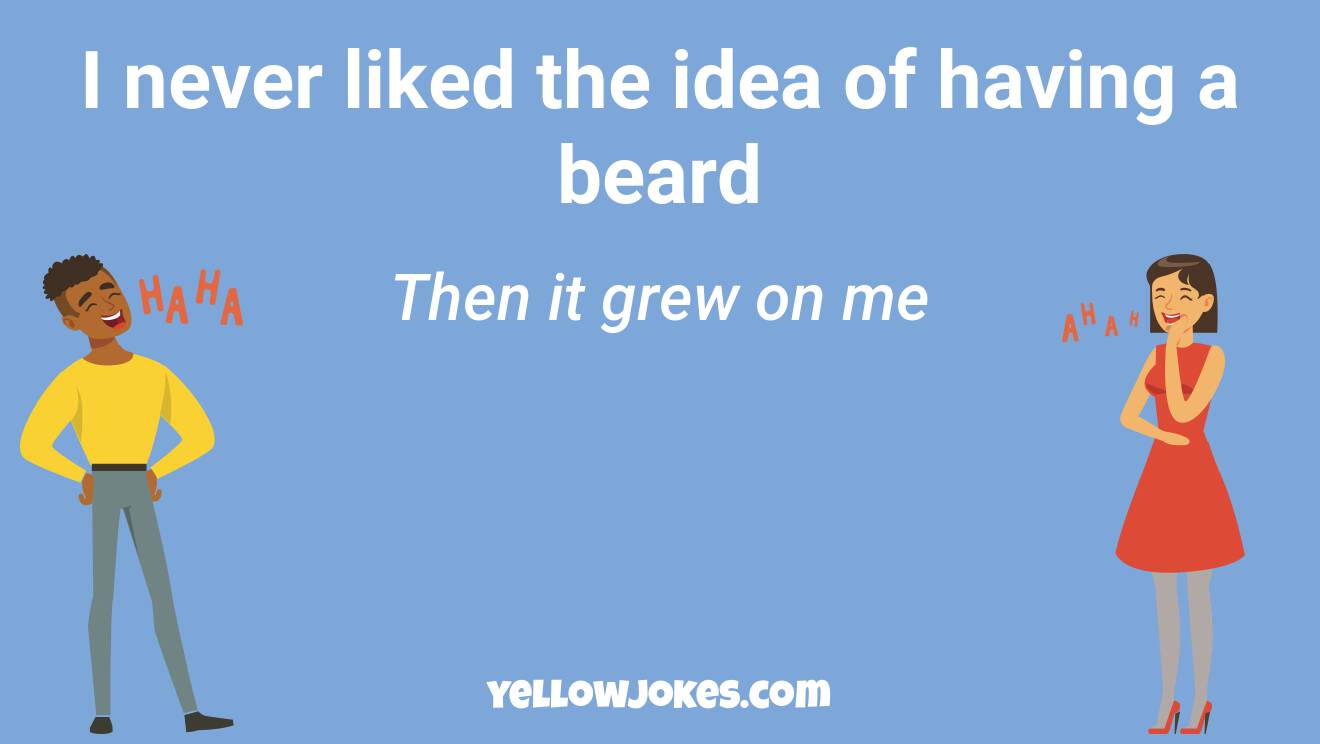 My friends Grandpa told us this when we were about 14, What did the one leg say to the other leg? Check out Shorty he's growing a beard!

My dad is a rugged ex-Marine with a salt-and-pepper beard... He's a seasoned veteran.

Where does Sean Connery put his beard clippings? His shavings account.

Daddy, there's a man at the door with a beard! Tell him I already have one.

My grandpa just walked into the room with a young man wearing skinny jeans and a beard. I said, “Who is this, grandpa?”

I was sleeping with two twins for while in my 20s.... My friends all asked, "how can you tell them apart?" I replied, "well...Sharon has long blonde hair, and Derek has a beard."

I'm unsure whether I like my beard. But it's growing on me.

My friend visited me months after I moved and said “sweet beard”. I said... “Thanks, it’s growing on me”.

My friend and I are in a beard growing contest Right now it's neck and neck.

Hey... Nice beard Thanks, it's growing on me

From my 8 year old son: What's the beard's favorite kind of nut? Mustachios

I would shave my beard... but it's kind of grown on me.

At first I didn't like having a beard But then it grew on me.

Who shaves many times a day but still has a beard? The barber.

Man with a beard a 100 years ago: "Ok, I'll go chop down some trees." Man with beard today: " I found a great face mask that's gluten and cruelty free."

I was thinking of shaving my beard But it really grew on me.

Native American run deep in my bloodline. That’s why I can’t grow facial hair. I have Apache beard.

When i was younger i never thought i'd have a beard ....But eventually it started to grow on me.

Went to shave my beard but decided not to, the longer I keep it, the more it grows on me. Sure this is old but actually thought this the other day.

What do you call the first Neck beard Presidents wife? First M'Lady

What's the difference between your beard and your ex? Your beard always comes back (inspired by an oddly satisfying post)

I started growing a beard a while back. I didn't like the way it looked at first. But its growing on me.

An Italian man was having trouble growing his beard. So he did some research and found out he was native American.

So now when asked about his beard he says
"Eh.. It's just apache"

My friend asked me how I liked my new beard I was working on... I told him it was growing on me

Man with a beard now: “I found a great face mask that’s gluten-free.”

I was invited to a party and told to "dress to kill" Apparently wearing a scullcap, beard and a backpack wasn't what they had in mind.

My pal's dating twins. I asked him if he had any trouble telling them apart. "Noooo..." he said "That's easy. Helen's got blonde hair and Brian's got a beard."

I've been growing a beard for six months now. Everyone else at the vegetable patch is super confused.

We all know about mohawks, but what was the most popular facial hair style for native Americans? A pachy beard

I was sitting at the park with a friend when a man walked by... He had on a black hat and a black robe. His sideburns were curly and his beard was long.

My friend said "That guy is Jewish"

They wanted to add Chuck Norris's face to Mount Rushmore, but the granite is not hard enough for his beard.

Did you hear about the Native American with facial hair? He had Apache Beard.

In Saudi Arabia it is unlawful to hang a man with a beard. They must use rope instead.

Gillette have developed a new razor, just for dyslexics It's the best thing since sliced beard!

I've never had a beard and don't know if I like it, but it's growing on me.