Got home to find my wife had left a note on the fridge that said "This isn't working I'm going to my mum's" I opened up the fridge. The light was on and the beer was cold. I'm not sure what she was talking about. 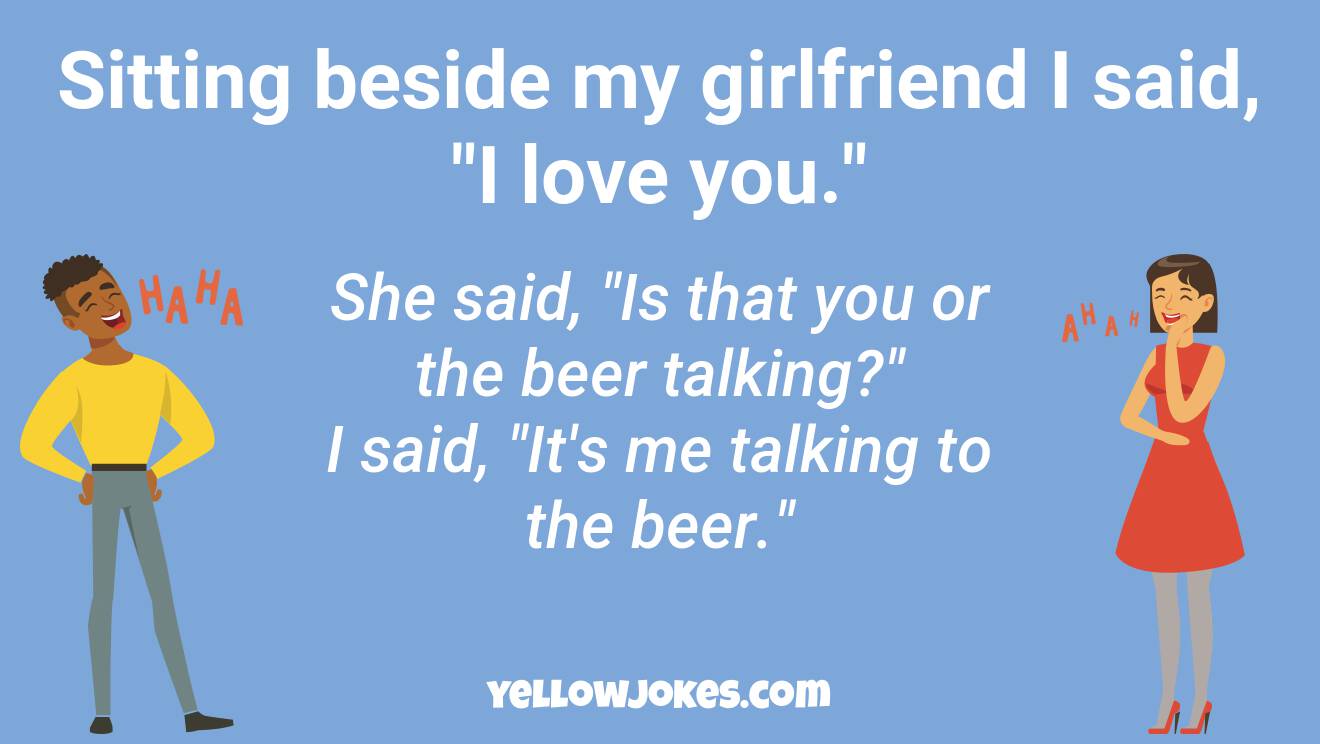 An infinite number of people walk into a bar... The first orders a beer. The second orders half a beer. The third orders a quarter beer. The fourth orders an eighth of a beer...


The bartender pulls out two beers and tells them to know their limits.

Drinking non-alcoholic beer is like going down on your sister It tastes the same but it's just not right.

Wife crashed the car again today. She told the police the man she collided with was on his mobile phone and drinking a can of beer. Police said he can do what he likes in his own living room.

My pizza is burnt, my beer is frozen and my girlfriend is pregnant... ...I can’t pull anything out in time!

Non-alcoholic beer is a lot like going down on your sister... it tastes the same, but it's just not right.

So the CEO of EA walks into a bar.. "I'll have a beer" he says, exasperated from the recent PR firestorm.

"Sure is." the barman replies. "Would you like a glass with that?"

I just poured my root beer into a square cup. Now all I have is beer...

I put root beer into a square cup. All I have now is beer.

My wife left a note on the fridge that said "This isn't working I'm going to my mom's" I opened up the fridge. The light was on and the beer was cold. I'm not sure what she was talking about.

Three logicians walk into a bar.. The bartender asks, "would all three of you like some beer?"

The first one replies,"I don't know"

The second one replies, "I don't know either"

The third replies, "Yes all three of us would like a beer"

I met a drunk ventriloquist who said she wanted to sleep with me... I didn't know whether it was her or the beer talking...

I saw a lady texting and driving today I was furious. I rolled down my window, and threw my beer at her.

What do a pregnant woman, a burnt pizza and frozen beer have in common? A man who didn't take it out in time.

What's the difference between beer nuts and deer nuts? Beer nuts are a dollar fifty. Deer nuts are always under a buck...

I'll see myself out now.

What does a burnt pizza, a frozen beer and a pregnant girlfriend have in common? One dumbass who never pulls out in time

I put my root beer in a square glass. Now it’s just beer.

A man holding a large block of asphalt walks into a bar. He says to the bartender, "A beer for me, and one for the road."

If your urine looks like beer, you are likely dehydrated. But if it looks like bud light, you're good.

A hamburger walks into a bar and orders a beer. Bartender says,"Sorry, we don't serve food here."

What does a burnt pizza, a pregnant woman and a frozen beer all have in common? You left it in too long.

A sandwich walks into a bar and asks for a beer. The bartender takes one look at him and says, "We don't serve food here."

What's a pregnant woman, a frozen beer, and a burnt pizza have in common? Some moron didn't pull it out.

What do frozen beer, a burnt pizza, and a pregnant woman have in common? An idiot who forgot to take it out earlier.

What do burnt pizza, frozen beer and a pregnant chick have in common? Some douchebag forgot to pull it out in time.

What do a frozen beer, a burnt pizza, and a pregnant woman have in common? Some jackass forgot to take it out in time.

A guy is having a drink with his wife..... A man is sitting at home on the veranda having drinks with his wife and he says, “I love you.”

She asks, “Is that you or the beer talking?”

Wife asked me what am I doing Me: Killing Mosquitos
Wife: How many have you killed?

Me: Three were near my beer bottle and two near my wallet

What does an alcoholic do when he's out of beer? Wine

Comic Sans walks into a bar and orders a beer. The bartender says, "Get out, we don't serve your type!"

My coworker invited an Asian friend to the party His friend said he would bring Coronas to the party, but didn't show up with beer.

*Everyone left the party feeling a little sick.*

I can make light only using beer, vodka and wine. Don't believe me? I'll show you: BAM! Booze LED!

A chicken sandwish walks into a bar and orders a beer Bartender says: " We don't serve food here"

Traffic cop: Is this car licensed? Driver: Yes! Cop: I'll have a beer then!

What do you get when you pour root beer into a square cup? Beer

A guy walks into a bar and asks the bartender what time the most beautiful women show up at... The bartender tells him "It's all in the eye of the beer holder"

What do you call a male beer? A hebrew.

Found this bar on the moon Great beer, no atmosphere.

What do you call a beer run but for when it’s White Claw? A seltzer sprint.

After UK's Parliament declared that "LoOt bOxEs aRe sUpRisE mEcHaniCs nOt tEChnIcAlLY GAmblInG" EA: Dude I cant believe we got away with loot boxes not being called gambling

A Marine and a SEAL walk into a bar... The Marine gets a beer

The SEAL gets a book deal

Why is it impossible to throw a beer at Trump? Because he's a draft dodger

An Australian, New Zealander and a South African walk into a bar and each order a beer. Bartender: Sorry, we don’t serve Bears 🐻

If you take a Baptist fishing, they will drink all your beer. But, if you take two Baptists fishing you will have all the beer to yourself.

I was having a bad day and then I played a country song in reverse... My tire on my truck got fixed, my wife apologized for cheating and came back, I didn’t run out of beer and got back on to an asphalt road!

I went to a party with the intent on taking a girl home and sleeping with her. My beer goggles were on so I didn’t realize until the next morning her teeth had cracks all over.. I slept with the creature from the crack lagoon

A battery, a mule, and a fish walk into a bar. The mule orders a beer. "I'm off the wagon," he explains.

The battery orders a juice. "AA all the way," it says.

"And for you, sir?" The bartender asks the fish. "Water," it croaks, and collapses.

What is an arctic animal's favorite drink? A polar beer

How do you sink a Canadian submarine? You knock on the door and they will open it and invite you in for a beer

I've had it with people texting and driving. if i see one more person on their phone while driving im going to roll my window down and throw my beer at them.

3 elderly men are sitting next to each other on a park bench The first says, “It’s windy today.”

The second says, “No it’s Thursday.”

Some idiot was texting and driving and rear ended my car. It spilled my beer all over the place.

Why did the fungi bring beer and bread to the party? It was the yeast he could do.

My friend asked me if I ever drink my beer with corriander in it I told him, "Once in a Blue Moon"

A skeleton goes into a bar... And orders a beer and a mop

What does a frozen beer, a burnt pizza and a pregnant woman have in commonn? An idiot didn't get it out in time

I love you my friends and that's not just the beer talking. It's from the bottom of my bottle of wine too.

Sitting next to my wife today, I said "I love you", She replied "Is that you or the beer talking?"

Yesterday my doctor told me, "if you don´t stop drinking, you´ll die." I asked him why. "Because thats my beer."

I came home from work and there was a note from my wife on the fridge. It said, "It's not working. I can't take this. I'm going to my mother's."

I opened the door. The light came on and the beer was cold. I don't know what in the world she was talking about.

A woman in this bar just told me she wants to have my babies.... Watch my beer while I go home and get them.

A tourist is cycling in the Dutch countryside... ...when a passing car slows down beside him. The driver rolls down the window and asks “You’re awfully fast – are you heading to Sexbierum?”
The cyclist replies “Just the beer and the rum. I’m married.”

What do a pregnant woman, a burned pizza and a frozen beer have in common? In all three cases somebody took it out TOO LATE

What do a burnt pizza, a frozen beer, and a pregnant woman have in common? In all 3 cases, someone forgot to pull it out.