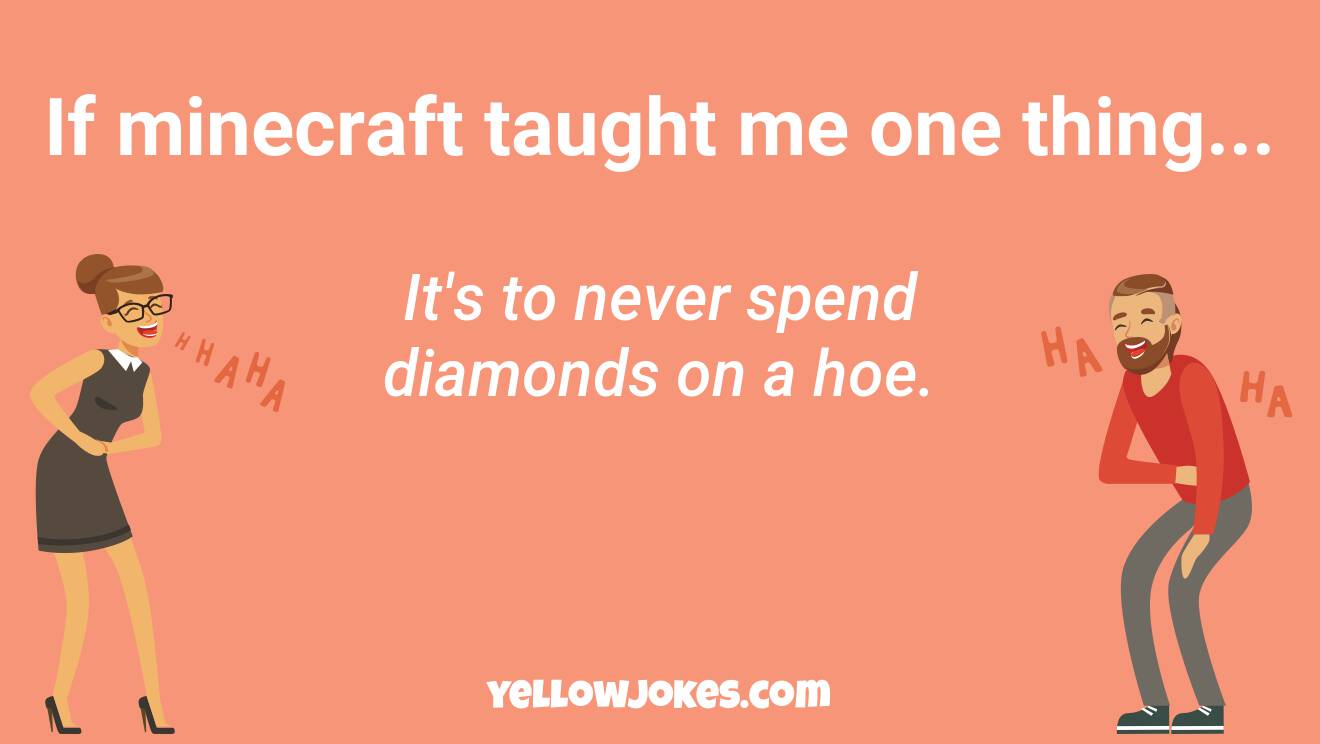 If there's one thing Minecraft has taught me . . . It's to never spend diamonds on a hoe.

Everyone's excited for the new Minecraft movie. It's sure to be a real blockbuster

What would Mark Zuckerberg add to the game, if he created MineCraft? Data.

So he can mine it.

If Minecraft has ever taught us anything... It’s that you shouldn’t spend diamonds on hoes

What’s the square root of Minecraft? There’s three, actually. The potatoes, the carrots, and the beetroots.

What happens to Minecraft characters when they turn 16? They grow cubic hair!

What is Minecraft? Adolf Hitler's lesser known second book about his love of knitting.

What’s the first thing Micheal Jackson does when playing Minecraft? He changes his skin.

I've been playing Minecraft lately.... It's a very top-Notch game

I just heard that there's going to be a Minecraft movie… …it's gonna be a blockbuster.

What genre would a Minecraft Movie be? A Block-buster

Did you guys hear about the new Minecraft movie coming out? I heard it's going to be a blockbuster

Minecraft Me: I love minecraft
Friend: can i please join
Me: no
Friend: why not?
Me: this is minecraft not ourcraft

What did chlorine say to iodine when they were playing minecraft? Bromine

What do you call it when you don’t want to talk to someone in Minecraft? You block them.

Soviet Russia would've banned Minecraft Until it was called "Ourcraft"

What do priests and people who date on minecraft have in common? They're both really into miners.

What is Minecraft? It's Hitler's lesser known second book about his love of knitting. Officially the title is Mein Kraft but, the kids like this spelling more.

In Minecraft, there are the Overworld Lands, the End Lands, and the... Nether Lands.

Now I know why I can't play Minecraft in my Dutch class.

If Hitler were alive today, he'd hate playing Minecraft Whenever he'd start mining diamonds, his generals would yell out "mine fewer!"

What does Hitler name his Minecraft worlds? Mein Kraft

What would happen if Minecraft went communist It would be ourcraft

My boyfriend locks the door to the room and stays up playing Minecraft all night and its weird He says things like "oh yeah, deeper, deeper." And "oh, it's gonna blow!"

I mean, I like digging and hate creepers too but sheesh.

If pewdiepie had a serious battle in minecraft, what would his team be called? svengers

Why do kids love Minecraft Because they are Minors.

Did you hear about Microsoft buying Minecraft for several million dollars? If only they realised that Minecraft cost 30$.

What country plays minecraft the most? The netherlands.