My girlfriend just text me, 'thespacebuttonisbrokenonmyphonecanyoupleasegivemeanalternative' Anybody know what 'ternative' means?

Me: “Cannibal Dan or Dan that can’t spell?”

*notification from my friends phone, it’s a text from Dan.* “I can’t wait to meat your friends tonight. 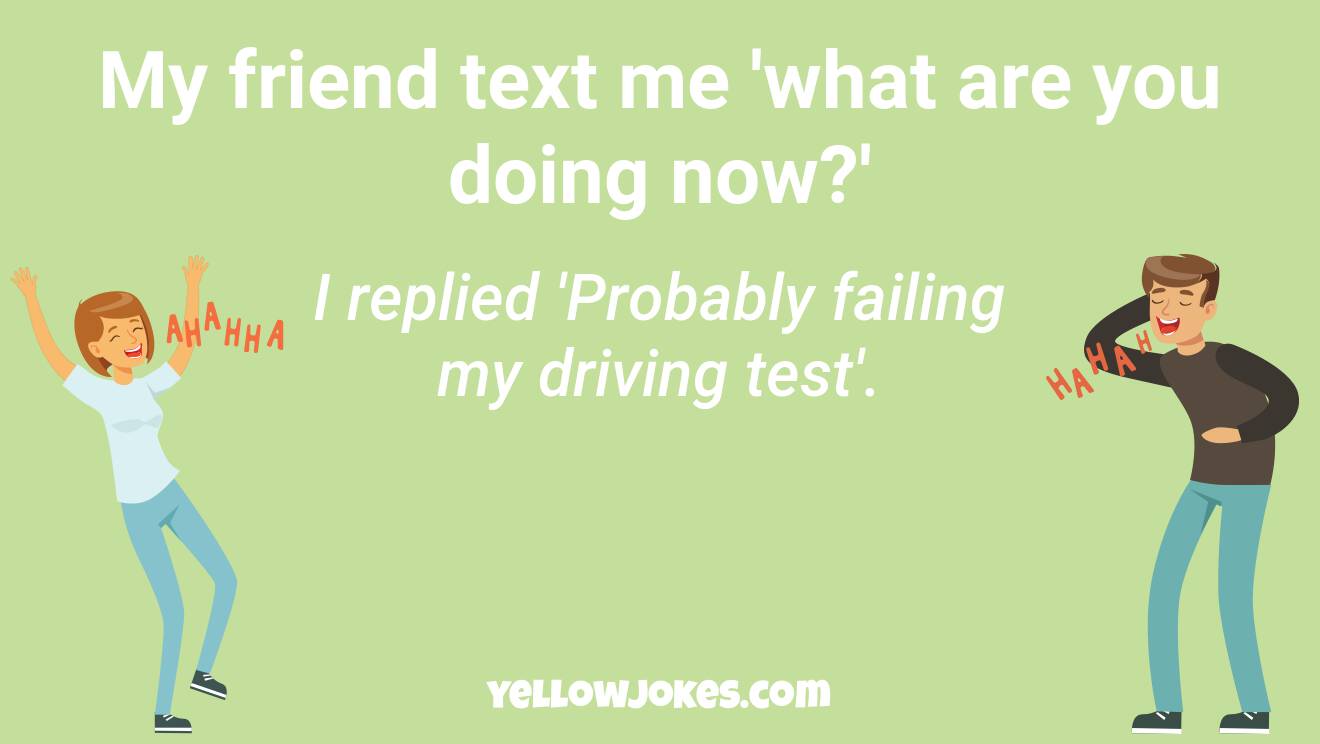 Met a cute guy at the bar, gave him my number and told him to text me when he got home I guess he's homeless.

Told a girl to text me when she got home. She must be homeless.

What did the math text book say to the Shakespeare text book? Look, buddy, I've already got a lot of problems, and I really don't need any of your drama.

What did the Irishman text his Wife? "Honey I'm down at the pub having a pint with the lads. Be home in about 30 min. If I'm not back by then please read this message again."

I told a girl to text me when she got home She must be homeless, poor thing

My girlfriend told me I was one in a million... When I looked through her text messages, I had to admit she was right

Next time someone texts you to say "call me"... Call them to say "text me". And just hang up.

I text my wife tonight, "Honey, I'm going to stay in the bar another hour with my friends for another pint..." "...if I'm not back in an hour then read this message again."

I hate when I'm driving and I see people text and drive. It makes me want to throw my beer can at them.

My bank has a new feature where they'll text you your bank balance. I think it's pretty cool. I just don't think they should end the text with "LOL", though.

The inventor of predictive text has died. His funfair will be hello on Sundial.

While you are out, buy some eggs

Are the readers of this subreddit mostly men? Who else would consider a couple inches of text to be long?

The guy who invented predictive text died last night... his funfair is next monkey

I told a girl to text me when she got home... She must be homeless.

Auto-correct is so crazy now a days... My mom meant to text me 'I love you' but it auto corrected to 'You're a disappointment.'

Don't know if this is a scam but I just received a text saying I'd won $250 cash or 2 tickets to an Elvis tribute night. It says press 1 for the money or 2 for the show.

I recently bought a copy of Monty Python's Big Red Book, but was later dismayed to find that I'd purchased the Spanish language version... Nobody expects the Spanish text edition.

Did you hear that the guy who invented predictive text has died. His funfair is next sundial.

My blonde girlfriend broke up with me today. She was upset at me getting a text from Amber Alert

I gave my number to a really hot girl at the bar and told her to text me when she got home. She must have been homeless.

Mixing up the title and text fields. What's the worst way to ruin a joke?

My ex sent me a text saying, "I wish you were here". I replied, "Where are you?"

She said, "At the cemetery."

What I if told you You read that last text wrong.

I gave my number to a girl at the club She said she'd text me when she got home...

Text and drive? Oh cell no

A woman gets a new number She sends a text message to her husband.

W - "Hi honey, this is my new number. Can't wait to see you tonight"

My dad text me saying, "Don't try to be someone you're not." It hurt when he added, "Oops, forgot the comma after 'someone'."

If you have four tea cups, then give away half, what are you left with? A joke that doesn't translate well to text.

My neighbour showed up at my party last night. Me: My friend Jack is coming as well btw

Them: The cannibal Jack or the Jack that can't spell?

Me \[checks my phone for Jack's text message: I can't wait to meat ur neighbours!\]: Yeah I'm not sure either.

Boy sent a text to her girlfriend - Ready for tonight, Babe? You're going to use that mouth so hard. Reply: I am Amy's father, and what is she going to do with her mouth?
Boy: Oh, she didn't tell you?
Father: What?
Boy: It's Karaoke night!

Omegle is weird. Everyone keeps asking me if I know American Sing Lenguage Like, we're talking over text, I don't need to know ASL

What to French Cats text back when they receive something funny? Lmao

My wife text me saying “myspacebarisbrokenpleasegivemeanalternative” I replied saying of course but I couldn’t help but think, what does ternative mean?

What is the dumbest text you could ever send? "There is a cop behind me - I hope he doesn't pull me over"

I told my crush to text me when she gets home. She must have been homeless.

I bought a book on becoming a thief But when i opened it there were only pictures, no con-text.

What did the depressed Buddhist text his mom? Commiting suicide, BRB

Follow your dreams......... Text them. Text them again. Show up at their job. Find out if their exes are prettier than you.

My mom sent her friend a gif via text message. Said to my mother:"even moms are sending memes now days."
Mother said "its the memeing of life.

Sad news, the guy who invented predictive text just died. His funfair is next monkey

Text from Amazon Going to buy Whole Foods, want me to pick you up anything?

A guy was just sacked from the local print shop for always aligning their text to the left margin I think it's justified.

What do you call plagiarism of a novel written in prison? A story taken out of con-text!

I go to the Doctor Title:
Doctor: I understand you're experiencing hearing difficulties. Please describe the symptoms.
Text:
Patient: Well, Homer is fat and Marge has blue hair.

I met a beautiful woman the other day, gave her my number , and told her to text me when she got home She must be homeless

What did the sauce cook text to the hot girl working in his kitchen? Send noodles.

What did Chris Brown's future girlfriend text him that she later regretted? 'Hit me up'

According to my girlfriend I rely too much on my parents. I'll get my mum and dad to text her back later.

Did you here about the guy that went to prison for writing? I'm sorry, that was completely out of con-text.

A man is looking at a graffiti text in Hebrew A passing rabbi is curious and asks whether he knows what is written there.
‘Of course, it says SIR, YOU ARE STUPID.’
‘Oh, but you forgot to read it right to left. So it actually says STUPID ARE YOU, SIR.’

Really wanted the day off, so I text my boss Me: I can't come in today. I'm sick
Boss: How sick are you?