I got an e-mail saying “At Google Earth, we can even read maps backwards”, and I thought... “That’s just spam”

Bing could have totally crushed Google if they had called it "Bang" I mean, think about it.. "I BANGED Emma Watson last night." 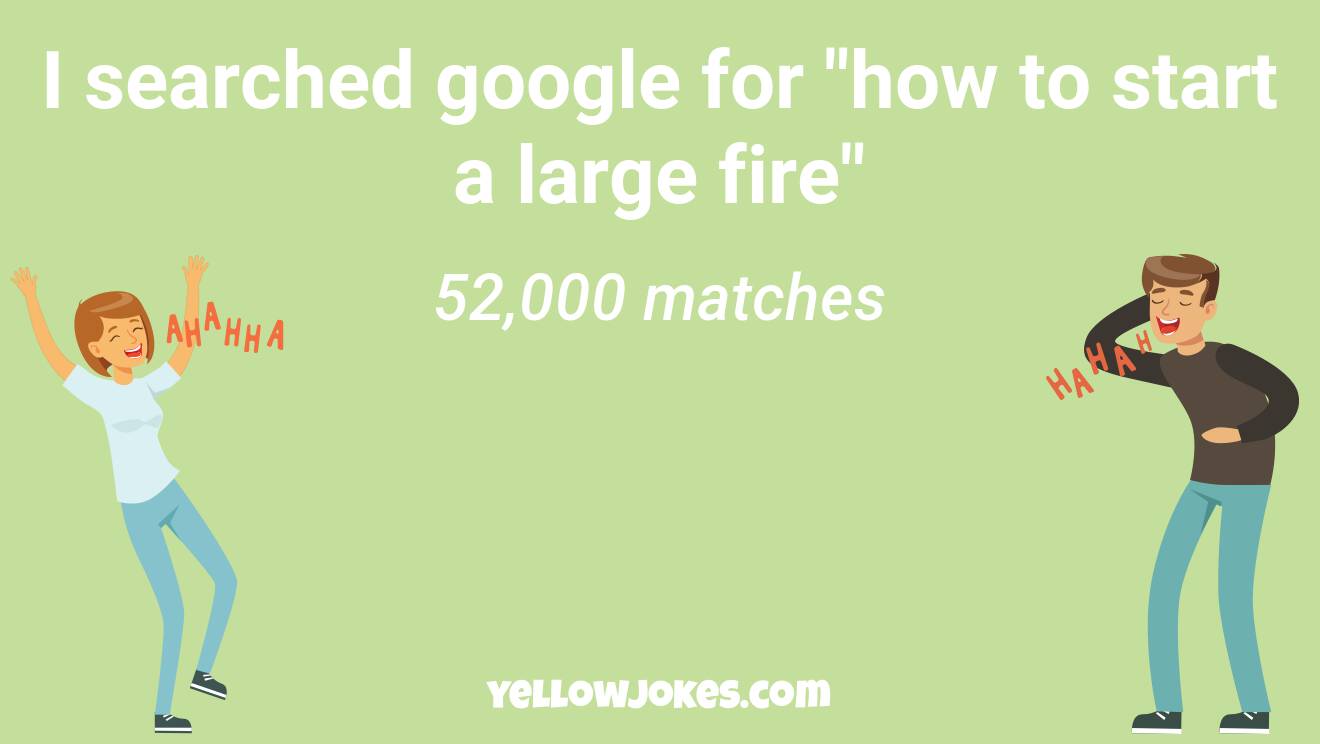 I'm glad the cave rescue is complete.... Now when I google Thai boys I can get back to normal results

is google male or female? female: because it refuses to let me finish a sentence before making suggestions

Edit: I think I may be missing a version, but looking through the comments it seems no one else knows what it is either. I'll have to google it.

Is Google a woman? I can't even finish a sentence without it coming up with other suggestions.

Just got an email from Google detailing how they have devised a way to read maps backwards... Turns out to be spam

I just explained Google images to my mum... "Pick anything to search for" I told her.
"What about a nice cream pie?" She asked.

I received an email from Google It said, "At Google Earth we can read maps backwards " I thought, "That's just spam."

Got an email from Google the other day... "At Google Earth, we're so good we can read maps backwards"

If you Google "lost mediaeval servant boy" You get "This page cannot be found".

Is Google a boy or girl? Girl because it won't let you finish your sentence without suggesting other ideas

As I walk through the Valley of the Shadow of death I remind myself that you can't always trust Google Maps.

Is Google male or female? Female, because it doesn't let you finish a sentence before making a suggestion.

I think Google's a woman... Because it won't let you finish a sentence without coming up with other suggestions.

What's the most searched word on Bing? Google

I asked my buddy what it's like working at Google. Says he can't complain.

I got an e-mail saying, "At Google Earth, we can read maps backwards!" and I thought... “That’s just spam.”

Asked Google how to start a campfire without any tools It gave me 20 million matches.

I typed "Missing medieval servant" into Google... But it just came up with "Page not found".

Is Google male or female? Female, because it doesn't let you finish your sentence before making a suggestion.

I want my password to be beef stew but google says it’s not stroganoff.

Google is useless I tried looking up lighters and all they had was 69,000,000 matches.

I asked my friend who works in google how it is out there ? He said " can't complain "

Have you noticed that if you google the phrase "lost medieval servant boy" The search returns "Page not found".

Q: Is Google male or female? A: Female, because it doesn't let you finish a sentence before making a suggestion.

What's the safest place to hide a dead body? Page 2 of Google search.

I used to store motivational quotes that I found online, onto the cloud, for whenever I needed some inspiration. Unfortunately I forgot the password for my Google account.
I have no Drive.

I've converted the house to google home... without telling my wife. How do I use this for a prank? I've thought about just lowering the brightness of the house over the course of a couple months

How can you tell if Google is a female? It makes suggestions before you finish your sentence.

what does Islam and Google have in common? a Musk

Did you know, if you google medieval squire boy.... it'll say this page cannot be found.

What do you do if you want to look up something in Italian? You google.it

Google is like a girlfriend because.... It won’t let you complete the whole sentence and start guessing, and you ask only one question…..

but get hundreds of irrelevant answers in seconds.

What do you get when you pull up Gettysburg on google maps? The Gettysburg Address 🙃

thas is what you shoud write to you gf : go to google translate, select English to German and write THICK : and tell her thats what you will get when you come homen. (i just found out about that xD )

Puglsey Addams, "Thing" & Rule 34... What are "Things you should never Google Alex?"

My dog needed a checkup, so I Googled a place nearby. But when I got there, it was just this blonde white guy in army camo covered in swastika tattoos. Stupid Google found me a veteran aryan.