What did Sparticus do to the cannibal who ate his nagging wife? Nothing, he's gladiator.

What did Spartacus say to the cannibal who killed his wife. Nothing, he's Gladiator.

Me: “Cannibal Dan or Dan that can’t spell?”

*notification from my friends phone, it’s a text from Dan.* “I can’t wait to meat your friends tonight. 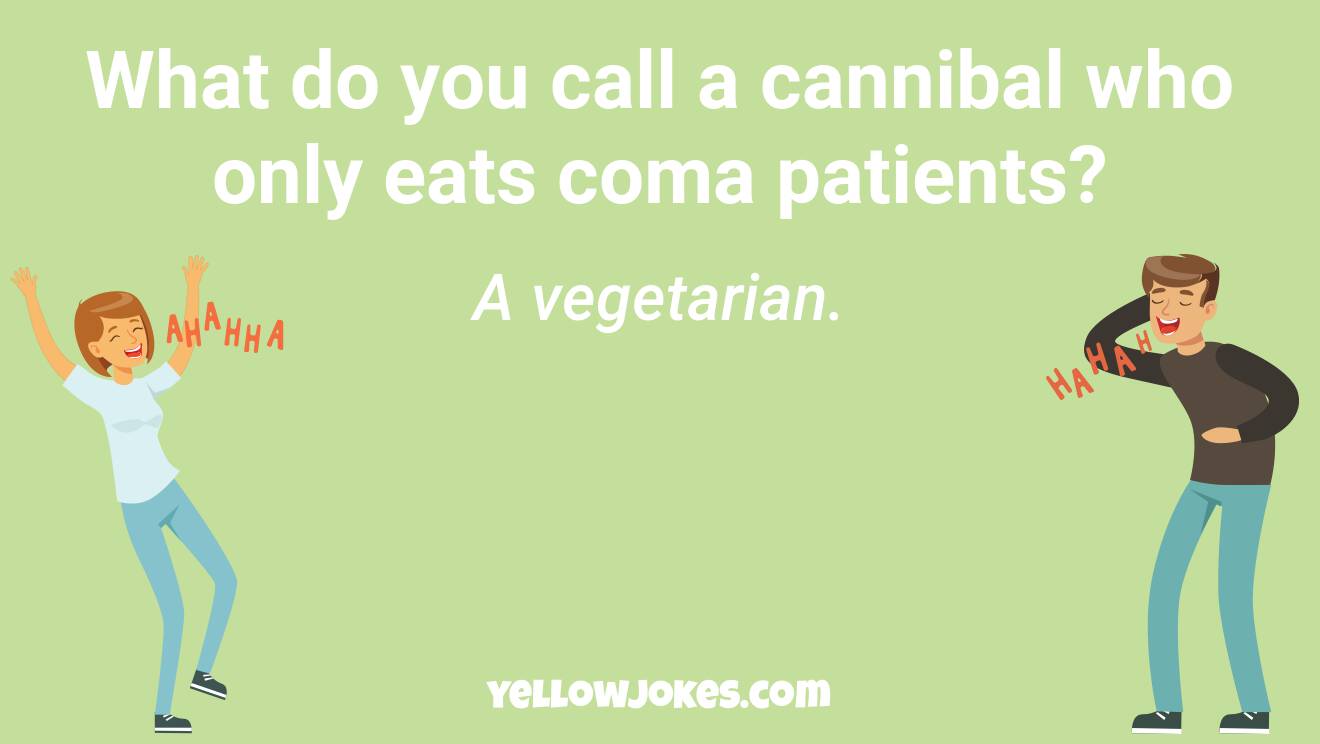 Two clowns are eating a cannibal. One turns to the other and says: "I think we got this joke wrong".

"A cannibal once took my sister to see a Russell Crowe film" "Gladiator?"

What do you give a cannibal that shows up late to dinner? A cold shoulder.

Two clowns are eating a cannibal. The first clown says to the second "I think we're doing this joke wrong".

Why did the cannibal leave the restaurant? Because he got cold feet.

What did Spartacus say to the cannibal who ate his wife? Nothing, he's gladiator.

A cannibal showed up late to the luncheon His friends gave him the cold shoulder.

Two clowns are eating a cannibal. One turns to the other and says, "Um, I think we got this joke wrong."

I saw a cannibal at the nursing home the other day, he was walking around making fun of all the residents. I realized then that I actually had something in common with him. I too find vegetables to be tastier if I roast them first.

What do you call a doctor who eats his vegetables? A cannibal.

How does a cannibal say hello? He offers you a handshake.

What's the first thing a cannibal does in the morning? Grab a cup of joe.

A cannibal in a courtroom Representing himself, the cannibal was asked by the judge if he had anything to say.

"If the quote "You are what you eat" is true then I am an innocent man."

Two clowns are eating a cannibal... One turns to the other and says "Bob, I think we are telling this joke wrong..."

What happened when the cannibal was late for lunch? He was given the cold shoulder.

What is a Cannibal? Someone who is fed up with people.

What does the cannibal do after dumping his girlfriend Flush

I heard this from my 11 year old cousin, the look on his mom's face after he told me this made my day.

Two clowns are eating a cannibal One turns to the other and says, "Wait. I think we are doing this wrong."

Two cannibals are eating Amy Schumer. Cannibal 1: "Does this taste funny to you?"

Cannibal 2: "Not at all, and there's plenty to go around!"

What did the cannibal get when he was late to dinner? The cold shoulder

What happened when the cannibal was late to the dinner party? He got the cold shoulder.

What do you call a cannibal who only eats comatose people? A vegetarian.

A cannibal came late to the family dinner. He was given the cold shoulder.

A suspected cannibal stood in front of a judge and was asked to give his final statement, to which he replied: "If you are what you eat, then I am an innocent man".

Its so frustrating being a cannibal I swear, sometime I just wanna throw up my hands.

My neighbour showed up at my party last night. Me: My friend Jack is coming as well btw

Them: The cannibal Jack or the Jack that can't spell?

Me \[checks my phone for Jack's text message: I can't wait to meat ur neighbours!\]: Yeah I'm not sure either.

What did the Cannibal Hysterectomy Surgeon have for dinner? Left Ovaries.

What is a cannibal's favourite TV Show? Graze Anatomy.

Which part of his new job disappointed the cannibal? The human resources department

What do you call a cannibal that eats himself ? A narcissist

Just because a cannibal is late for dinner... ...Doesnt mean he only deserves a cold shoulder

What does an angry cannibal complain about? He's complaining about not eating Jack today.

Where does a cannibal go for it's breakfast? The nursery.

What did the wife tell her husband about Christmas dinner? "Honey, the children are ready to eat!"

What did the cannibal wife say to her cannibal husband?

"Honey, the children are ready to eat!"

What do you serve a cannibal who is late for dinner? A cold shoulder

What is a cannibal bank owner’s favorite food? The Nutella

What did the cannibal eat for Thanksgiving? A Turk

Do you know how cannibal calls athletes? Fast Food.

What do you call a Cannibal who only eats retards? A vegetarian

What would a suicidal cannibal say ? Roast me

Did you hear about the viking cannibal? He had a Swede-tooth

When you go to a cannibal restaurant, always bring a friend to have for dinner.

What did the cannibal make of the politician he just met? Pork and bologne sammiches.

Show me a cannibal who gets sick on missionary stew... ...and I'll show you that you can't keep a good man down!