"Fortnite" is a terrible name for a game. It's too weak.

A Vegan, a Crossfitter and a Fortnite player walked into a bar I only know because they told everyone twice within 5 minutes.

School dances this year are going to be like Fortnite lobbies... Lots of stupid dance moves and unnecessary shooting

I heard that Fortnite put a limit of three outfits for players in Isreal. Jews aren't allowed to have four skins. 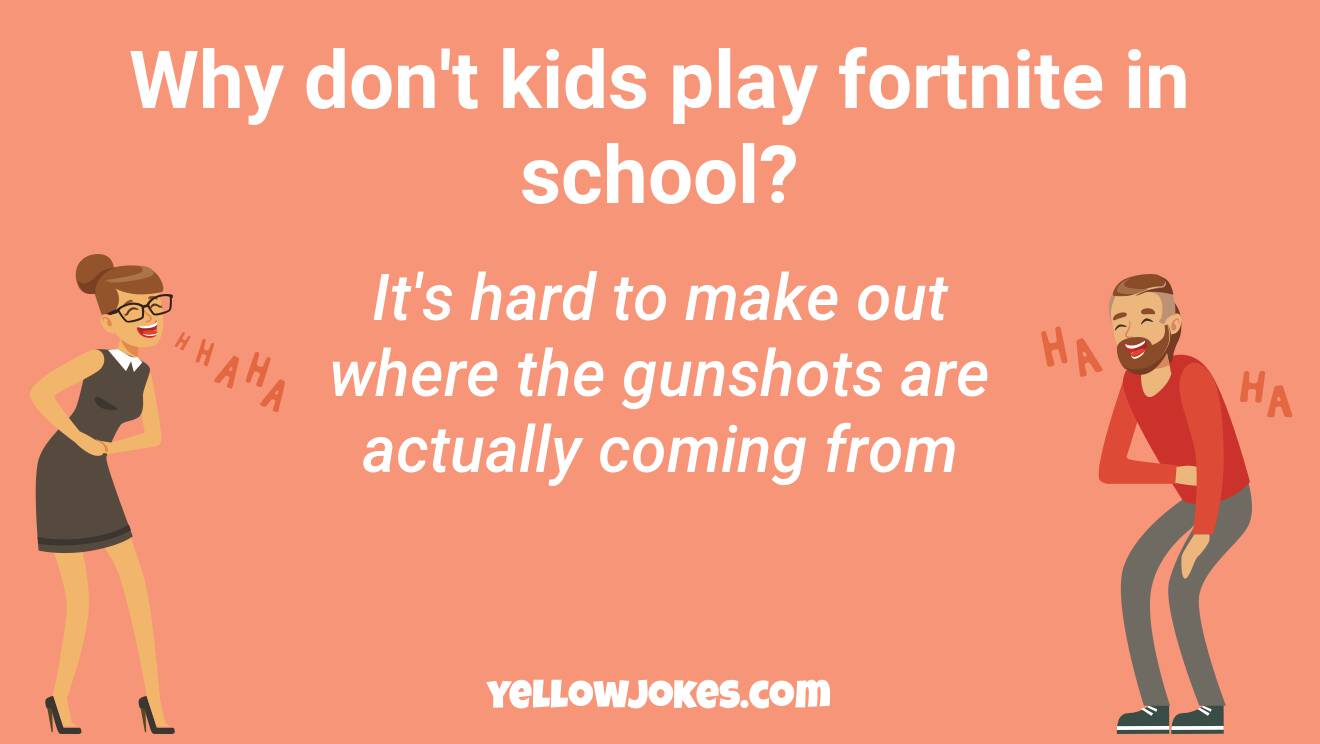 Guys I had a nightmare I dreamed that my Fortnite account got deleted.

I was really scared for a second that I played Fortnite.

I finally decided to play Fortnite. It's fun, but it gets boring after a couple of weeks

No wonder fortnite is so popular among school children Who doesn’t love hopping off the bus and shooting everybody in sight?

What do fortnite players and olive oil have in common? They’re both extra virgin

What’s the deal with this new thing called Fortnite? Saw it a couple of weeks ago

Why is the game called "Fortnite"? Because it's only fun for about two weeks.

What do you call it when you play Fortnite during the day-time? A sad depraved existence

If a vegan does crossfit and doesn't like Fortnite... ...which do they tell you about first?

I found the real life inspiration for the island from Fortnite! The Virgin Islands

A dentist shoots a kid doing a fortnite dance. "You're bleeding because you were flossing"

Me and my friend were playing fortnite I said, “let’s make this interesting”

So we stopped playing fortnite

What does fortnite and Vietnam have in common Bushcamping

Whats the sequel to fortnite? Month.

Trump should build his wall out of Fortnite... Nobody seems to be able to get over it.

I tried for two weeks to get into this game... But the Fortnite just wasn't worth it.

I stumbled upon an Islamic Fortnite Youtuber... His name was Allah-A

I don't have a problem with kids being obsessed with fortnite. After all, they must have great hygiene... Considering how much they floss

You know what they call Fortnite in America? They call it a quarter battle with cheese.

Why don't anti-vaxxers play Fortnite? They're too afraid to get shot.

What do you call Fortnite with cows? A cattle royale.

What would happen if we took all possible school shooters and put them in one school? Literally Fortnite

Why is Fortnite a bad name for a game? It is too weak

So I booted up Fortnite twice simultaneously, and it turned into a zombie survival game It was 28 Days Later

What do you call a 21 year old fortnite player in a wheelchair? Virgin mobile.

Fortnite is a beautiful game, very competitive That's all the joke

What's common between Fortnite and American schools? You get out of school bus and start shooting others.