What did the scientist say when he found two isotopes of helium? HeHe...

Im making bad chemistry jokes coz all the good ones argon 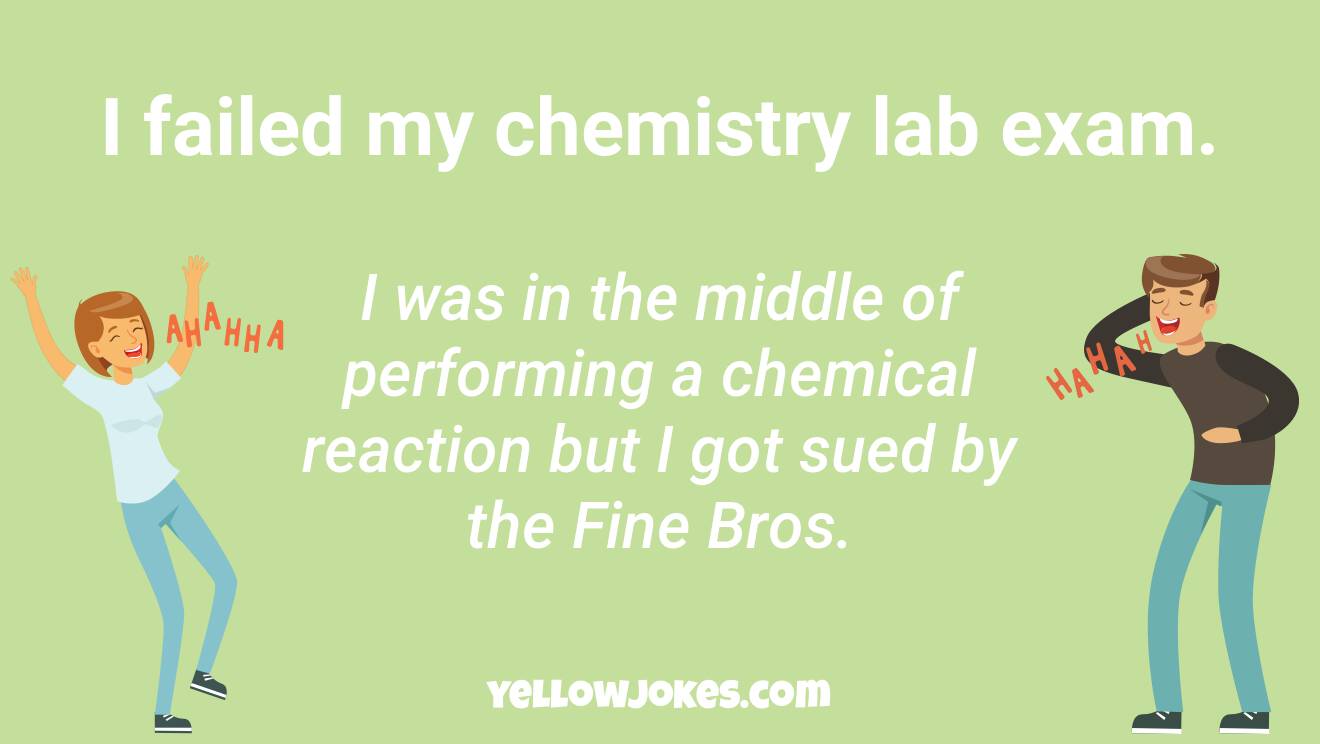 How do you tell the difference between a chemistry professor and a politician ? Just ask them to read this word: unionized.

A chemistry lab is a lot like a party... Some people drop acid while others drop the base.

I wanted to build my career on making chemistry jokes to cure my depression. Then I realized alcohol is a solution.

That awkward moment when you tell a chemistry joke, and get no reaction. I guess all the good chemistry puns argon.

Are you made from Na, selenium and xenon? Because you are sodium SeXe.

Edit: I have yet to zinc of another chemistry joke.

My friends told me to stop making chemistry jokes, but then I told just one more I got no reaction, and now all my friends Argon

My nutritionist told me to only eat foods if I could pronounce their ingredients I gained a lot of weight after taking organic chemistry.

For our chemistry exam we had to write a thousand words on acid. Unfortunately my pen turned into a gorilla and the floor melted.

So my friend asked me how often I make chemistry jokes. I replied "Periodically"

I'd like to apologize for all of my terrible chemistry jokes. All of the good ones argon.

How often do I make chemistry jokes? Periodically. I made one yesterday, but it had no reaction.

How often can you joke about chemistry? periodically

Chemistry jokes. Good or bad, it always gets a reaction out of you.

I would make a chemistry joke, but seems like all the chemists here... ...Argon.

Why don't people tell Chemistry jokes? Because they never get a reaction.

I tell bad chemistry jokes because the good ones Argon

Why do people consistently make bad chemistry jokes? Because all the good ones Argon.

I'd tell you a chemistry joke but I know I wouldn't get a reaction.

I was going to say a chemistry joke... But I was afraid I wouldn't get a reaction.

My Chemistry teacher was right Alcohol IS a solution.

My chemistry teacher asked me if I knew anything about sodium hypobromite. I replied, "NaBrO"

I once told a chemistry joke There was no reaction

The school counsellor told me that alcohol was never a solution. I said that my chemistry teacher would disagree.

If you're ever having trouble with Chemistry, just remember... Bleach is a solution

I was trying to come up with a Chemistry joke... But all the good ones Argon

How can you tell if someone is a chemistry major? They have a mole on their body.

My roommate is a chemistry major, and plays the organ.. One could say that he's an organic chemist.

My chemistry class had a party My teacher brought some avocados, about 6.022x10^23 of them, for the guaca-mole.

I can never understand organic chemistry. It has alkynes of problems.

What is the best part about controversial chemistry jokes? They always get a reaction.

What did the chemistry teacher say to his friend when they found a mineshaft? BrAu

I told someone a chemistry joke earlier today. I can't remember what it was, but I got the reaction I was looking for.

What did the dipole say to another? "Have you got a moment?"


(Needs big chemistry knowledge to understand this one)

"And why is that?" the teacher asks, a bit bewildered

"Because it allows me to survive your lessons"

I was going to tell a really funny joke about Sodium hydride, but I'm really bad at Chemistry so... NaCl

The man replied, "Wait, did you just call me sodium?"

Not everyone understands organic chemistry. You

get it or you don't.

Reed Richards posses a mastery of mechanical, aerospace, electrical engineering, chemistry and biology But we all know why he's called Mr. Fantastick.

A science teacher asked his class "Would you like to hear a Chemistry joke?" They said "Na"

A physicist and a biologist had a bit of a relationship. But there wasn’t any chemistry.

I didnt really like my science teacher There was no chemistry between us.

All of the chemistry jokes on here are the same. Rhenium Phosphorus Oxygen Sulphur Tennessine

Why did hitler get an A in chemistry? He always knew the final solution!