What did the gamer say when his girlfriend asked what World of Warcraft and League of Legends were? "Wow, lol" 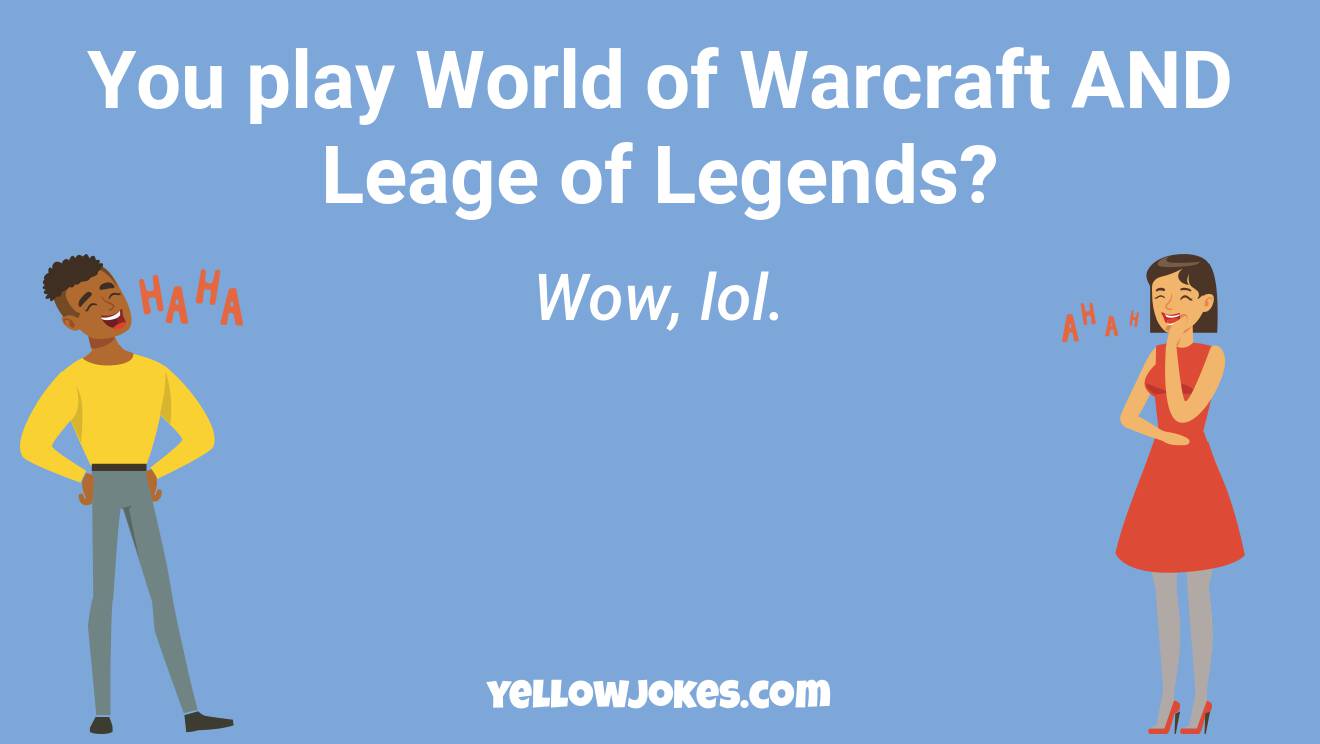 World of Warcraft. The only time I let my 9 year old play with a priest.

What do World Of Warcraft and China have in common? In both there's tanks used to take down mobs.

An al-Qaeda suicide bomber carried out his mission... And made it to heaven, where he found 72 virgins. Turns out they were all guys playing world of Warcraft.

You play League of Legends AND World of Warcraft?? Wow, Lol.

There are people out there who don't know what World of Warcraft and League of Legends are WoW, LoL

What is Owen Wilson's most favorite game? World of Warcraft

Robert Mugabe admits to playing World of Warcraft You are not in this Presidential group.
Please leave office or you will be teleported to the nearest graveyard in 59..58...57

Andrew Luck just retired spontaneously from the NFL. What World of Warcraft classic server do you think he's playing on?

A third of my WoW (World of Warcraft) clan was decimated last night. oW!!!

A restaurant in Florida is now serving lion-meat tacos. Lion meat is a big change for Florida, because most taco stands serve human flesh.

Syria has stated they will supply Hezbollah with “game-changing” weapons. The game-changing weapons being supplied include: self-firing bazookas, piloted predator drones, lethal Nerf guns, and of course, angry hamster grenades.

Online multiplayer game World of Warcraft has lost ten percent of its players in the last three months. Well, they didn’t exactly “quit”, they're just locked out of the house.

78,000 people have applied to live on Mars for the rest of their lives. Of course on Mars there are no intelligent life, jobs, or breathable air… so it’s a lot like America.

…the sad news is most of the applicants simply aren’t qualified to die in outer space.

After her son was shot, a mother in Texas visited WebMD for treatment instead of taking him to a hospital. She said went to WebMD after she couldn’t find any medical advice on Urban Dictionary.

…the woman says she understands her mistake, and next time she needs to contact the police, she’ll immediately Google “911.”

Amazon is reportedly developing a smartphone with a 3D screen. Finally, smartphone users have absolutely no reason to look up!

Grocery chain Whole Foods may have sold chicken salads that were labeled as “vegan.” Vegans immediately knew something was wrong, because the salad tasted good.

In an attempt to regain ratings, all four hosts of “American Idol” are being replaced at the end of this season. The new judges are Honey Boo Boo Child, a photo of John Travolta, and the guy who sings “Gangnam Style.”

Just wanted to note, Jimmy Fallon did a joke identical to mine on 5/8, for those of you that think my writing isn’t tv-ready.

Bill Clinton has said Hillary “hasn’t mentioned” a 2016 presidential run. Which isn’t saying much, because Hillary hasn’t spoken to him since 1997.
Share: