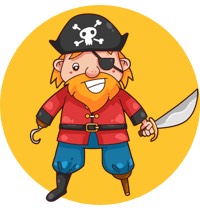 A pirate goes to the doctor and say, "I have moles on me back aaarrrghh." The doctor: "It's ok, they're benign."

Pirate: "Count again, I think there be ten!"

I asked a pretty, young, homeless woman if I could take her home, and she said yes with a big smile. The look on her face soon changed when I walked off with her cardboard box.

Edit: I'm a pirate, so it works in first-person

What is a ghost pirate’s favorite kind of tea? Boo tea.

(Courtesy of my 6 year old)

What did the pirate say on his 80th birthday? Aye matey!

We are writing to you because you have violated copyright ...

Due to recent illegal activities that have been performed through your connection, your internet service has been permanently disconnected.

Your internet access has been terminated due to illegal usage.

What's a pirate's least favorite letter? Dear sir,
Your internet access has been terminated due to illegal usage.
Sincerely, Comcast.

We are discontinuing your internet service due to suspicious activity/illegal downloading on your network.

What's a pirate's least favorite letter? Dear sir, we are writing to inform you that you have violated the copyright agreement..

Since We're Doing Pirate Jokes. What Does Every Pirate Hate? A small chest with no booty.

What a pirate’s favorite letter of the alphabet? None of them. Historians suggest that most pirates would have been illiterate.

What is a pirate's worst nightmare? A sunken chest and no booty. 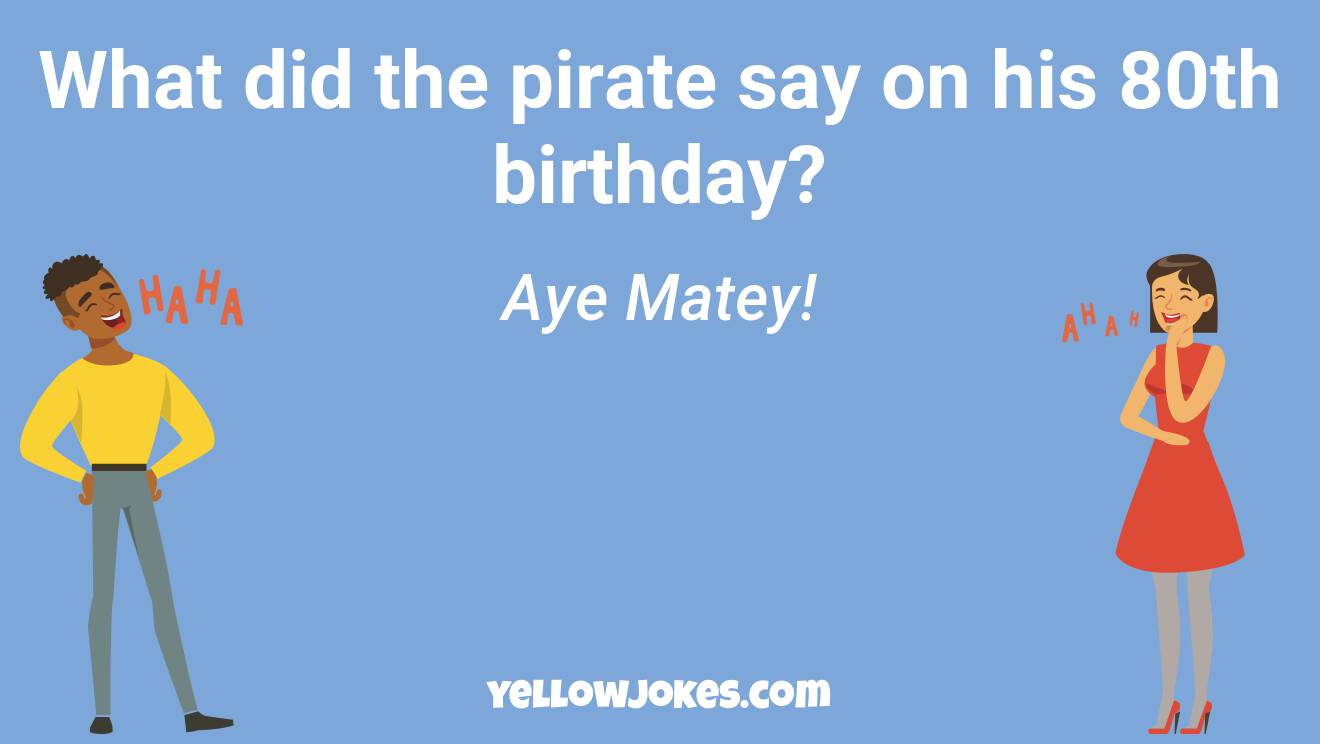 Your internet service has been terminated due to copyright infringement.

What's a pirate's favorite letter? Ye'd think it was R, but his first love be the C.

What' is a pirate's least favourite letter? Dear Sir,
We are writing to you because you have violated copyright ...

What do you call a communist pirate ship? The USS-ARRR

How much did the pirate pay to have his ears pierced? A buccaneer :D

What's a pirate's greatest fear on the first date? A sunken chest with no booty.

What's a pirate's favorite letter? You would think it be R, but tis' the C they love.

What did the pirate say on his 80th birthday? Ay matey.

A pirate goes to the doctor A pirate goes to a doctor, worried that the moles on his back might be cancerous. The doctor inspects them.
"It's ok," he says. "They're benign."
The pirate replies "Check 'em again matey, I think there be at least ten!"

Why couldn't the pirate learn the alphabet? Because he was always lost at C!

A pirate's wife asks him what body part he'd be most okay with losing The pirate thinks and replies, "my spine!"

"Why?" says his wife, a little surprised

"Because it's holding me back!"

What did the pirate say when he turned 80? Aye Matey.
(Saying it out loud might help)

A pirate goes to a doctor worried that the moles on his back might be cancerous. The doctor inspects them.
"It's ok," he says. "They're benign."
The pirate replies "Check 'em again matey, I think there be at least ten!"

How much citrus does it take to kill a pirate? None.

How much does it cost a pirate to get his ear pierced? A buccaneer.

What is a pirate's favorite letter? You'd think it'd be "R", but me heart belongs to the "C".

The pirate says "Argh, it's driving me nuts."

A pirate captain asks his first mate "Find out what be the Roman numeral for the two" "Aye aye! " responds the first mate

What kind of music does a pirate like? Arrr'n'B

On Halloween, a little boy dressed as a pirate. He went up to a house and rang the doorbell. A man answered and said, "Well I'll be, a pirate! But where are your buccaneers?
The little boy replied, "Under my buckin' hat."

Did you hear about the pirate themed phone Apple have been designing? They’re gonna call it the ayePhone

What’s is a Pirate’s favorite letter of the alphabet? Some believe it’s R but his true love is the C.

When I was younger I wanted to become a pirate! Now I am a photographer, because every pirate has to own a Canon.

What do you call a philosophical pirate Arrristotle

A man was walking alone on a beach when he came across a pirate. The pirate asked him “where are your buccaneers matey?”. So the man replied: “Under my buccan hat”

Where does the Pirate keep his buccaneers? Under his buccan-hat.

What did the proud pirate dad say after seeing his son torch an enemy ship? Arr, son.

A Slovak oligarch, Japanese nationalist, communist and a pirate meet in a parliament... This isn't a joke. It's Czech Republic.

What did the pirate say when he turend 80? Aye Matey.

What do you call a well hung pirate? Dead

Why did the pirate prefer slightly above average students? Because he always preferred the high C's

What did the pirate say when he turned 80? Aye matey

(This is an old joke I saw. But haven’t seen it here in a while. So I figured some of you might get a small laugh out of this)

A chemist and a pirate were sitting at a bar The chemist asked the pirate what his favorite rare gas was, to which the pirate replied, "Arrrgon".

I just started a pirate themed band with my friends, but we're having trouble writing songs for it All we seem to be able to write are the hooks

How do pirates know they're pirates? They think, therefore they AAAARRR.

My dad just told me that and I laughed. So dumb but it's Talk Like A Pirate Day.

What's the difference between a pirate and a succubus? Where you put the peg!

(Credit to a friend)

Why couldn't the pirate finish learning the alphabet? He got lost at sea

Did you hear about the band of roving pirate toddlers? They spend their days sailing the Hi-C

Why did the pirate go to a pilates class ? To get some Booty

A pirate walks into a bar..... with a peg leg, a parrot on his shoulder, and a steering wheel on his pants.

The bartender says, "Hey, you've got a steering wheel on your pants."

Who do Russians pirate so many movies? Because there's never anything to watch on Nyetflix.

What is a pirate's favourite letter? Dear xxxxxxxxx

Your internet service has not been terminated for copyright infringement due to a lack of evidence.

What is a pirate's least favorite letter? Dear Sir,

We are writing to you because you have violated copyright ...

The Pirates' conversation… Pirate: The cannons be ready, Captain…

A pirate walks into a bar... The bartender says, "Hey pirate, what's with the paper towel on your head?"

The pirate replies, "Arrr, I got a bounty on me head."

What is a pirate's favorite letter? 'Tis the C!

Why couldn't the pirate see the movie?! the uploader forgot to take the lens-cap off after the movie started

What's a Pirate's favorite letter? P, without it he's irate

Hoist the colors high! Something you'd rather hear a pirate say than yelled at a KKK rally.

What did the octogenarian pirate say on his birthday? Aye Matey.

How do you know if you're a pirate? YOU JUST ARRRRRRRRRRRRRR

A pirate walks into a bar with a steering wheel for a belt buckle Bar tender says "I like the belt buckle"
Pirate replies "Arrgh, it's drivin me nuts"

What did the pirate say to the prostitute? Yo ho.

A blond, a rabbi, a schoolkid, a lawyer, a prostitute, the pope, a pirate and George Bush walk into a bar... The bartender says:

Is this a joke?

We are writing you because you have violated certain copyright laws...

What's a pirate's favorite letter R? That's what you think, but it's all about the C

What's a pirate's least favourite letter? P. It's like an R, but missing a leg.

The Pirate says "Aye its driving me nuts".

What did the pirate say when he turned 80? Ay Matey!

What's the difference between a pirate and a pimp? It's all about how you say "Yo Hoe"

We are cutting your internet connection due to the following reasons:

What's a pirate's favorite letter? The P, without it he's irate

I told my sister that if you rearrange the letters in 'vanilla' you get 'pirate' Her: no you don't

A pirate walks into a bar.. With a wheel on his crotch. The bar tender says
"Aye, what's with the wheel?"

Pirate says "arrrrrghhhhhh, it be driving me nuts"

What's a pirate's favorite favorite letter? You'd think its R but it's actually the C

My ex girlfriend was like a pirate's quest... ...she had a sunken chest and always kept me searching for the booty.

Why did the pirate put springs on his treasure chest? He wanted to see that booty bounce.

A pirate walks into a bar with a ship's wheel hanging from his crotch... The bartender asks, "What's that hangin' off ye?"

The pirate responds, "arrr! I've no idea, but it's drivin' me nuts!"

What did the pirate say when he walked into the brothel? arggg! thar she blows

How much did the pirate pay to get his ears pierced? A buck 'n ear

What was the pirate boxing champion known for? His left hook.

How much did the pirate's new earrings cost him? A buccaneer

You may think that a pirate's favorite letter is R But they actually love the C.

A pirate walks into a brothel and says... "ARG! THERE SHE BLOWS!"

Did you hear about the pirate who got in trouble at work? He was reported to H-arrrrr

What do you call a paedophile pirate? Aaarrrrrrr Kelly!!

A joke my granpda tells to me every time I see him A pirate walks into a bar and sits down. He orders a drink. The bartender gives him the drink and says "sir do you know there's a steering wheel in your pants" the pirate replies "yarr, its driving me nuts"

What are Pirate clothes made of? Yarrrrrn.