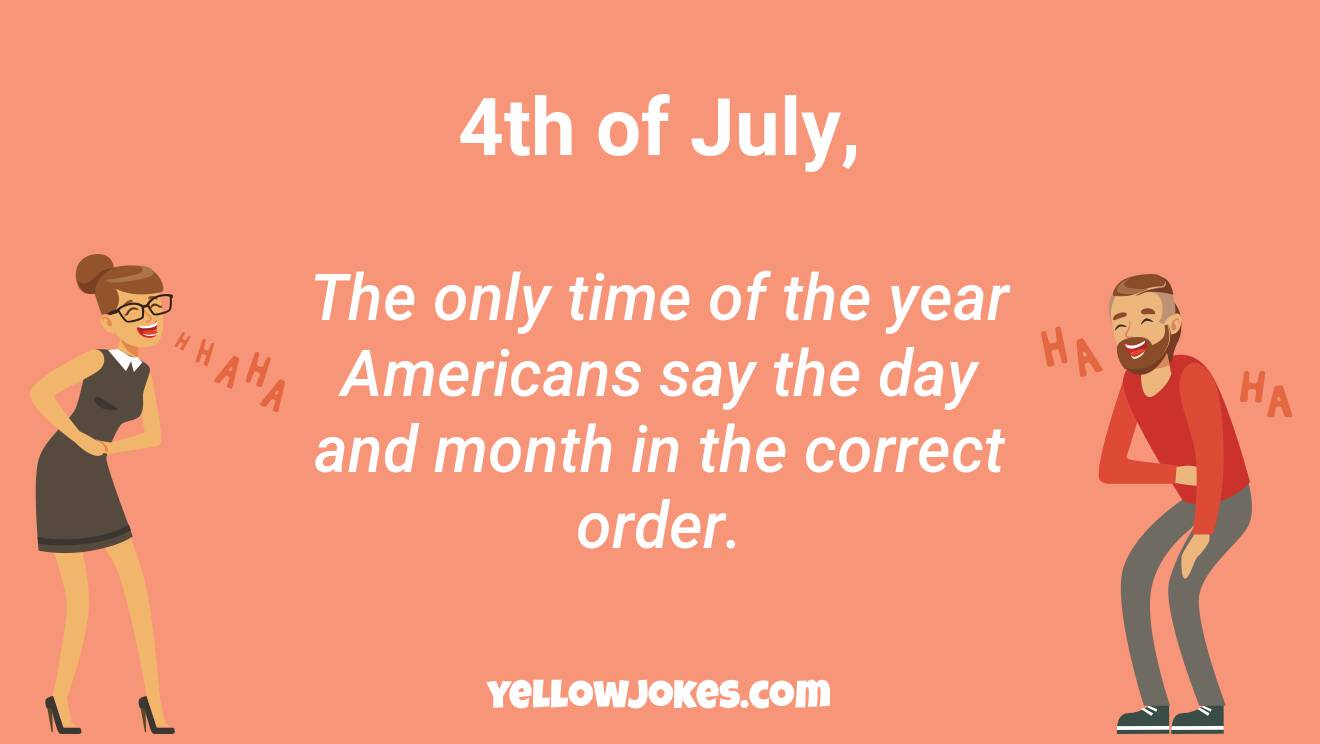 Every 4th of July, America sends Britain a locket with a little tiny picture of the United States in it. They want to remind the crown that America is still... (•_•)

I don’t see why Brits don’t celebrate the 4th of July. Surely 240 years of being officially separate from America is something to be happy about.

What’s the best drink to have on the 4th of July? A White Russian. Nothing is more American then a Russian helping you to make poor choices.

As a non-American, I love seeing Americans saying Happy 4th of July. It's the only time Americans pronounce dates correctly.

I held a door open for an Asian guy and he said "sank you" so i punched him in the face. Serves him right for bringing up Pearl Harbor like that.
PS: Happy 4th of July

Some people enjoy a day off on the 4th of July But not fire.

Today in the UK we celebrate the 4th of July. The day the average IQ of the British Empire jumped 100 points with a single signature.

The 4th of July The only time of the year Americans say the day and month in the correct order.

Where did the fire go on 4th of july? Firework

What do they do for the 4th of July in England? Sulk.

4th of july British people say that we as Americans go overboard with the 4th of July.

When really the only thing that went overboard was their tea

I put a picture of the USA in a heart locket to celebrate the 4th of July... Now it is truly independent

Man, my neighbors are really into lighting off loads of 4th of July fireworks... It sounds lile a school outside.

Last year I blew all my fingers off on the 4th of July And now my friends say they don't trust me. They say they can't count on me.

Can confirm: England Does have a 4th of July And we even get it first!

My dog hates the 4th of July Not because of the fireworks or anything, he's just going through a communist phase right now

Amidst all of the distractions on this 4th of July, let’s not forget what we’re celebrating That the British blew a 13 colony lead

Do you know why prisoners love the 4th of July? All the fresh meat on the 5th of July. Drive safe and party smart folks!

On the 4th of July, almost everyone has a day off, except for fire. Fire works.

Many veterans experience PTSD from the loud bangs of fireworks around holidays like 4th of July and New Years. My advice to them is to use noise-cancelling headphones, Netflix, and pharmaceutical-grade weed. Just like the children of Kabul.

What do FBI agents grill for the 4th of July? Hillary.

This 4th of July, remember: Alcohol and Fireworks do NOT mix Spilling even a little beer on a fuse can ruin fireworks.

Merry 4th of July! The difference between Uncle Sam and Santa Claus is... Santa Claus gives notes with his presents... Uncle Sam takes note of your presence.

Does Britain have the 4th of July? Or do the calendars just go July 3rd, July 5th, July 6th?