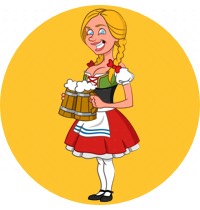 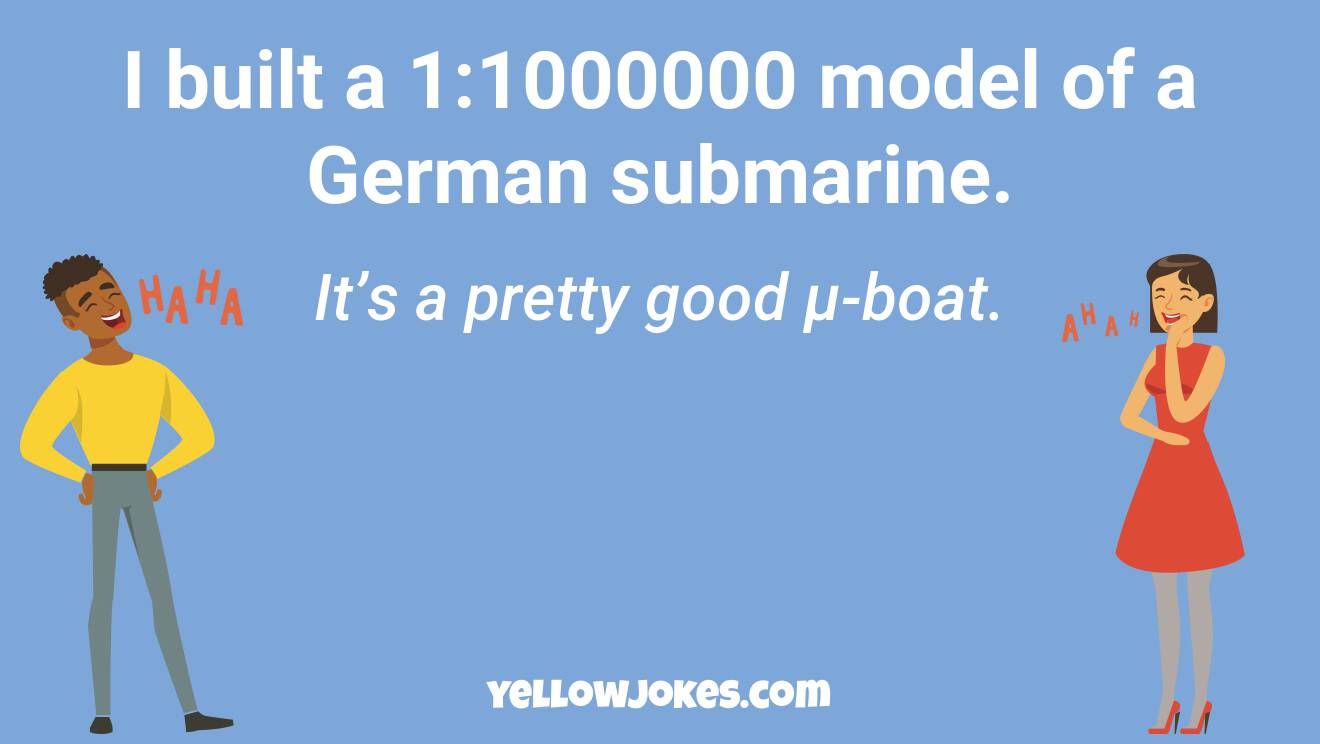 A German got pulled over by the police in France *Police officer:* "Name?"

The most German joke I know (source: am German): Why are there so few crimes in Germany? Because its illegal.

As a German, you know what really grinds my gears? Nothing. German engineering is flawless.

How many Germans does it take to change a light bulb? One. We are efficient and dont have humour.


Edit: Wow this blew up. As a German, I didnt expect this.

A German was going to a trip in France... He reached passport control and the officer asked:

"No no, just visiting"

As a german I have to ask: You know what really grinds my gears? Nothing. Our engineering is perfect.

At the Olympics I saw an athletic guy carrying a long stick and asked him, "Are you a pole vaulter?" He looked surprised and said, "No, I am a German. But how did you know my name is Walter?"

My grandfather killed 30 german planes during World War 2 He was easily the worst mechanic the Luftwaffe ever had.

Do you know what really grinds my gears? Nothing. I'm German and my engineering is perfect.

A German tourist comes to France ...a border control asks him

You know what really grinds my gears? Nothing. I am german, our gearboxes are flawless.

As a German, you know what really grinds my gears? Nothing. My engineering is perfect.

Otto the German was driving from Germany to Paris to visit some relatives. A French cop stops him and asks the usual questions:

i'm not german, but this is a little jokie joke Overheard at the White House:

Trump to Vice-President Mike Pence: "the less immigrants we let in the better."

Trump interrupts Pence and says: "don't call me that in public".

"No, just visiting this time."

My dad is German and dropped this one on me the other day. Dad: I never told you this but, my great grandfather died in the holocaust.

Dad: Yeah, he got really drunk one night and fell off of the guard tower.

Two toothpicks are hanging out in a forest, ... when all of a sudden they see a hedgehog passing by. So, one of them shrugs and goes like, "Hm, I didn't even know they had public transportation here."

How does a Japanese person distinguish between a German and an extraterrestrial? He doesn't, they are both Aryans.

What do you say when a German shares a meme with you? Danke.

A guy meets his buddy at the bar. He says, "I don't want to brag, but when I walked in, those two girls by the door looked at me, then both said to each other, 'nine' ". His buddy said, "Really? When I walked in, they were speaking German!"

What does the German say when you show him a good meme? Danke.

[WP] You are an assassin in WWII trying to find a German defector on a U-boat. Unfortunately you got a little lost on the dock... Whoops, wrong sub.

What do you get when you crossbreed a Chihuahua with a German Shepherd? A que-nein.

A cowboy walks into a German car showroom and says, "Audi".

So I was banging this german chick the other day.. Not sure why she kept screaming her age the whole time.

What does one German bread says to the other? Gluten Tag!

How do u say suprise in german? Blitzkrieg

Did you hear about the German summer camp where they gave all the kids adderall? It turned into a concentration camp

I don't understand why people are in awe when I tell them my father survived Auschwitz Most of the other German officers did too.

A German asks for a martini… "Dry?" asks the bartender.

The German, confused: "No, just one."

Did you hear the one about the German sausage? It's the wurst.

My grandfather was a World War 2 Vet In a single day during the Battle of Britain he was responsible for the destruction of 8 German aircraft killing 32 German airmen.


Easily the worst mechanic the Luftwaffe had ever had.

A German and a jew walk into a bar... The German farts.
The jew starts crying and says "Not again".

German physicist Werner Heisenberg is pulled over for speeding. The cop asked, do you know how fast you were going? Heisenberg responds, no but I know exactly where I am.

German sausages They're the wurst

A german stands in the passcontrol in an airport in Paris Passport officer: Occupation?

German: No, no, only vacation.

No matter how kind you are, German children are kinder I know I know, German jokes are the wurst.

After eating at a German restaurant, I had horrendous diarrhea for a week. It was the wurst.

Minesweeper It's either a computer game or an angry German custodian yelling at kids who stole his broom.

My Texan friends really seem to love German cars. Every time I see them, they smile, wave real friendly-like and say, "Audi!"

A man was walking down the street with a long pipe on his shoulder when somebody came up to him and said 'Excuse me, are you a Pole Vaulter?' He replied, 'No I'm German, but how did you know my name?'.

A man walks down the street with a large pole on his shoulder A person across the street asks:
"Are you a pole vaulter"
(With a strong German accent): "No, I'm a German but how did you know my name is Walter?"

A German is in the bathroom Someone knocks on the door.

"No," the German responds, "European."

German pronouns are hard to learn They're a real du Sie.

Sonny, sonny, what's the name of that German that hides our things around the house? Alzheimer, granny, Alzheimer!

Walter. I was in the park the other day and saw a guy practising his athletic trials, with a long metal stick for the Olympics. I asked if he was a pole vaulter, and he replied "Nein, I'm German. How did you know my name was Walter?"

As a German, do you know what grinds our gears? Nothing. Our engineering is perfect

Did you hear about that German barber? You know, Herr Kutz.

Spanish sausage is pretty bad, but... German sausage is just the wurst

What do you call a German virgin? Guten Tight.

My friend had a German plumber hook up his new shower.... I guess old habits die hard because he hooked up the gas line instead.

Have you heard about German GPS? It stops at Stalingrad.

Tell someone that you love them today, because life is short... but scream it at them in German because it's also confusing and scary.

A German man is leaving a plane after landing in Poland. The immigration officer asks him
"Occupation?" And the German man replies
"No just visiting"

How many germans does it take to change a lightbulb? None.

I recently bought a German car, but the navigation system is all messed up. It only gives directions to Poland.

I've heard some terrible German sausage jokes in my time... ...But this one's definitely the wurst

Why did the German baker call the police? Everything in his bakery was stollen

How do german doctors cure their patients? They heil them.

A man walks up to a German clock maker The man tells him, "My clock just goes tik, tik, tik, it never goes tok!"

The German clock maker holds a flashlight up to the clock and yells "VE HAVE VAYS OF MAKING YOU TOK!"

I can't remember the translation of German "wichtig." I have a feeling it's important, though.

The "American Dream" was discussed in class the other day... ... the professor turned to the German foreign exchange student and asked if they had anything like that in Germany to which he responded,

"We did, but nobody liked it."

How do you greet a celiac German? Gluten Tag

A German man walks into a bar... and orders a Martini.

What did the cowboy say upon entering the German dealership? "Audi"

I don't understand why people are in awe when I tell them my grandfather survived Auschwitz. Most of the other German officers did too!

What do you call a German jerk? Deutschebag

A german walks into a bar and orders one martini. The bartender asks:
"Dry?"
The German replies
"No, one you dumbass!"

I called German UPS to ask them when they would ship my Rift.. They said, "VR ready."

What sucks most about German food? Their sausage is the wurst.

What was the weather forcast in poland on the day before the german invasion? 86% chance of heil

I asked a German the other day if he wanted to hear a joke... I had the classic "How many ____ does it take to change a lightbulb" joke in mind.... But before I got to tell it,

My friend is a German butcher He always tells me the wurst jokes.

What was the motto of the German rocket program? Shoot for the moon. Even if you miss you'll hit London.