If you’re having a bad day, just punch an orphan. Who are they going to tell? Their parents?

Today I saw a little boy wearing rags sitting on a curb I said, "Awww, are you an orphan"?
He said, "Yes, what gave me away?"
I said, "Your parents."

A boy is about to be sentenced for killing his parents. He begs the judge to spare his life. The judge asks for one good reason he should be shown any mercy. The boy replies, “I’m an orphan, your honor.”

Old soviet joke. Who is your mother?

Who is your father?

I saw a raggedy little boy on the street and asked him if he was an orphan. He said, "What gave me away?" I said, "Your parents."

I passed a kid sat on the side of the road dressed in rags earlier. I asked him, "Are you an orphan?"

He replied, "Yes. What gave me away?" 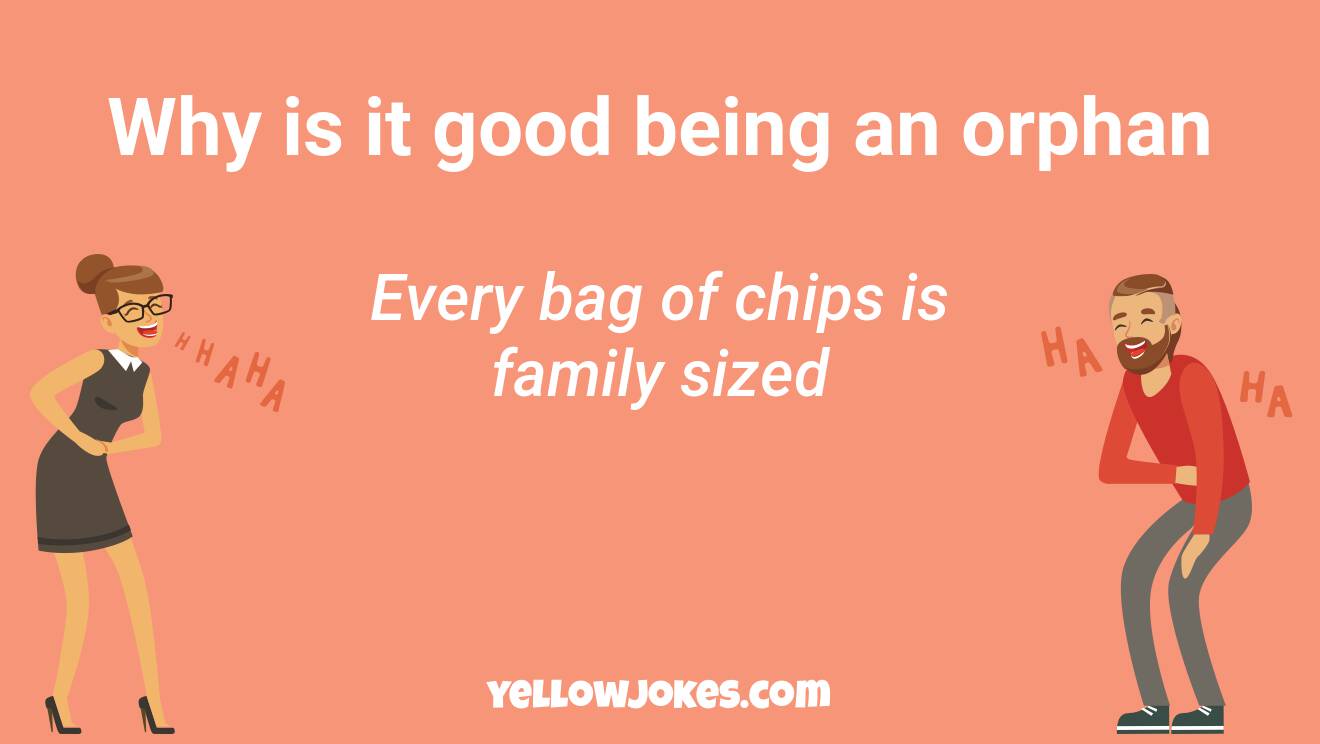 Why was the orphan so successful? When they told him "go big or go home", he only had one option.

Why can't an orphan play baseball? Because he can't run home

I was walking home from school when I saw a boy on the curb wearing rags and cloths. I asked "Are you an orphan?" He said "Yes, what gave me away?" I said "Your Parents"

What did one orphan say to another? Get in the Batmobile Robin.

What did one orphan say to another? Robin, get in the Batmobile.

Why did the orphan turn to a life of crime? To find out what it was like to be Wanted for once in his life.

What did one orphan say to the other orphan? Robin, get in the Batmobile.

What type of flour do you buy an orphan? Self raising.

What did one orphan say to the other? "Robin! Get in the batmobile!"

Why couldn't the orphan watch the movie? Because it was PG

What did the orphan poker player say? Will you raise me?

What did an orphan say to the other? Robin, get in the Batmobile.

A man sees a small boy begging for money He walks up to him and asks him if he is an orphan.

The boy asks "what gave me away?"

The man responds "your parents"

What did the deaf, dumb, blind orphan get for Christmas? *Cancer!*

What did the Orphan get for Christmas? Lonely.

My ex was orphan as a child I should have taken that as the first sign.
If her parents didn't want her, why would I.

Why was the orphan so successful? When he was told to "go big or go home," he only had one option.

(I've posted this joke here before, but I believe I've been the first, so if you recognize it as a repost it's because I wanted to tell it again!)

What do you call a black child with 2 dads? An Orphan

Post-WW2 Soviet joke \- Who is your mother?

Edited from my mistake earlier today: what do paedophiles and napalm have in common? They can both strip a Vietnamese orphan in under 30 seconds.

What did one orphan say to another? "Robin, get to the bat mobile."

What's the best part about being an orphan? All your chips and candy bars are family sized.

What did one orphan say to the other? "Get in the Batmobile Robin."

What do you call an orphan who suffers from horrific parental abuse? A paradox.

Why don’t orphan kids play baseball? They don’t know where home is.

Why can't the orphan play baseball? Because he can't find home!

What's the difference between an orphan home and a terrorists' boot camp? I don't know. I'm retiring next month.

Wanna know why it's great to be an orphan? All bags of chips are family size.

Friends are like family ...Too bad I'm an orphan.


All without my parents ever bothering me!

Disturbing/offensive why couldn’t the orphan get the toy. It said parent assembly’s required

They say it's easy to take candy from a baby, but you can take literally anything you want from an orphan. What are they going to do? Tell their parents?

What did the blind, deaf, orphan with no friends get for Christmas? Cancer.

You know what you should do? Punch an orphan. What are they gonna do? Tell their parents? ("Dude, that joke is so old")

But not the parents.

[DARK] If you are ever bored, punch an orphan What are they gonna do, tell their parents?

Probably Someone elses Joke, but I think I thought it up this week... When is the best time to hit an orphan?

When their parents aren't looking...

Why is being an orphan like not being able to pay your phone bill? Because you ain't got no data

What did the orphan say to the other orphan? Robin, get in the Batmobile.

How is the iPhone X like an orphan? Neither of them have homes.

Why is Annie the Orphan crying? There was a solar eclipse.

Why didn't Timmy get his parents Christmas presents? He's an orphan.

What did one orphan said to the other? Robin, get in the batmobile!