My girlfriend yelled at me today saying, "You weren't even listening just now, were you?!" I thought, "Man, what a weird way to start a conversation." 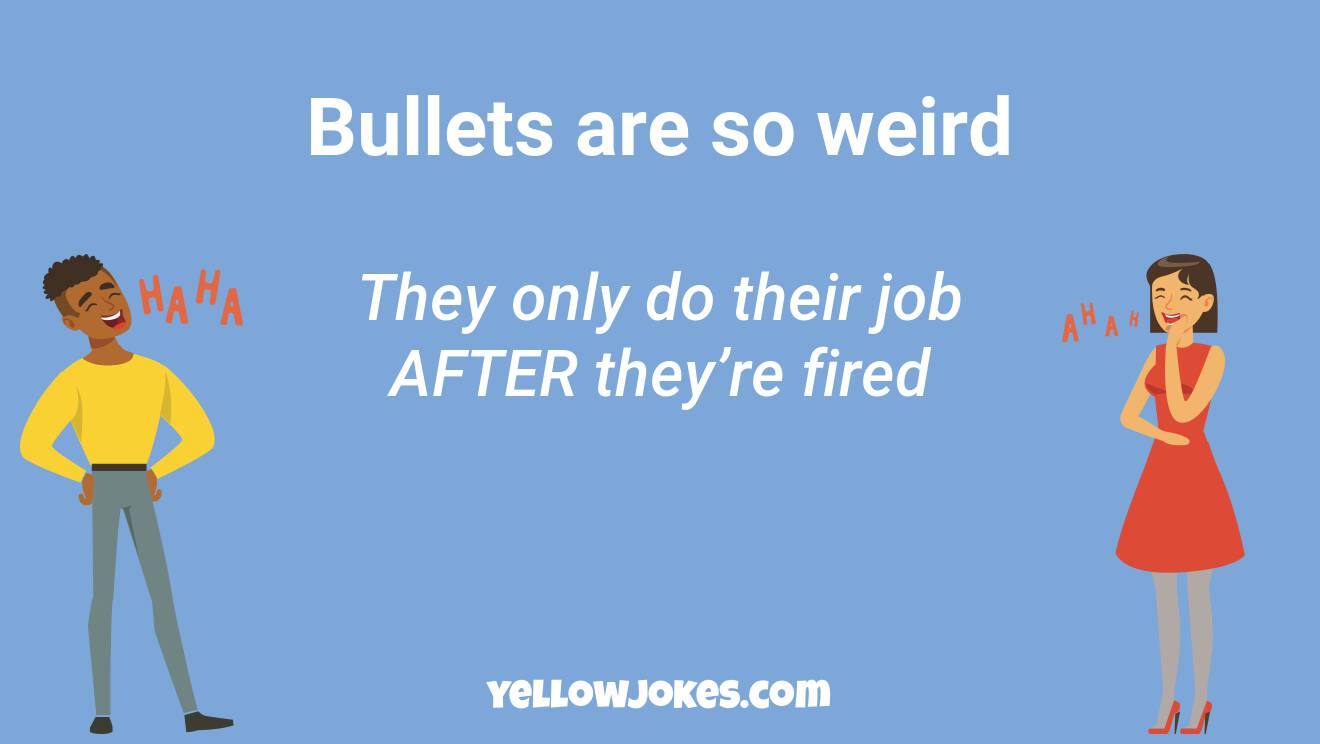 Bullets are quite weird... They only do their jobs after they are fired

My wife left a note on the fridge saying, "This isn't working, goodbye." I opened the refrigerator and it works just fine. Weird.

English is weird.. It can be understood through tough thorough thought, though.

I try to teach my mom something new everyday. Because you're supposed to learn from your mistakes.

Edit: Apparently a lot of you are all teaching my mother new things too. Weird.

English can be weird. It can be understood through tough thorough thought though.

My wife: You didn't hear a word I said, did you? Me: That's a weird way to start a conversation.

My wife is weird... She begins every conversation with "Were you even listening to me?"

My girlfriend is weird, she always starts conversations with, "Are you even listening to me!" Thanks, I'll be here all week.

Kids are like farts... I hate everyone elses but for some weird reason I like my own.

My wife is weird... She starts every conversation with "Are you listening to me?"

English is Weird. It can be understood through tough thorough thought, though.

I told my friend that he really shouldn't be using a straw and he replied, "Yeah, I know, I know, it's bad for the environment." I said, "Sure, there's that..." "But it's just a really weird way of eating spaghetti."

I before E Except when you run a weird heist on a feisty foreign overweight neighbor wearing beige.

Twenty years from now, kids are gonna think "Baby it's cold outside" is really weird, and we're gonna have to explain that it has to be understood as a product of time You see, it used to get cold outside

My girlfriend screamed at me today. "You weren't even listening to me just now, were you?" I thought, man, what a weird way to start a conversation.

This girl said she recognized me from the vegetarian club Which was weird, because I'd never met herbivore.

So I woke up this morning to my dishwasher making a weird sound.. Turns out she was just vacuuming.

My wife just screamed at me, “You haven’t been listening to a single word I’ve said!” What a weird way to start a conversation

My wife and I were discussing people owning weird animals... and she said, "I've always wanted to get a manatee." I said, "That's very kind of you. I will take it with two sugars."

I was rated "number 1 most likely to not murder you in a cabin in a forest" in highschool. I know, kind of a weird thing to be rated for but you won't find someone who disagrees.

Just pooped my pants. Which is weird, because I don't even remember eating them.

My girlfriend shouted at me, “ARE YOU EVEN LISTENING?!” Which I, personally, thought was a very weird and rude way to start a conversation!

My wife screamed at me: “You really haven’t listened to a single word I’ve said to you, have you?” What a weird way to start a conversation!

Complementing a mustache should be a good thing I don't know why she took it as an insult.

Has anyone played that weird Mexican carnival game where groundhogs pop out of holes and you have to smear them with avocado? I really suck at Guac-a-mole.

I like to sleep with the bedside lamp on, even though the wife thinks it's weird.... I don't see why, I think it makes a great hat!

I was asked to be a hand model I don't know why my parents looked weird at me, when I told them I got $100 for a hand job.

So, the other night I picked up a prostitute... ... And I began to pork her for several hours. I could tell she was really enjoying it, she made all sorts of weird noises.
I must have been going through puberty,
Because I made that hormone.

The weather forecaster this morning said that vision might be impaired by fog. I agree with him, but that's a weird way to spell "Whiskey".

I spoke to a Danish friend today I told him I wanted to buy his house. But he didn’t agree. Weird guy. Won’t be visiting him any time soon.

Who is this Rorschach Inkblot guy? And why does he make so many weird paintings of my parents fighting..

Ariana Grande would look so weird if she had no space in between her torso and head. Thankyou necks

My mom always complains bout me being weird, so when we went to Disneyland, she told me to "just blend into the crowd." So I covered myself in camouflage clothes and paint and walked around Disneyland.

Me: I know this sounds weird but I’m attracted to thicc zombies... Therapist: deadass?

Brazil owns 65% of the Amazona rainforest Sorry, I meant 60%

Edit4: Weird, Brazil doesn't even have a rainforest

I am going through a nasty, unmutual divorce because she didn't love me anymore, and my new girlfriend is a paralegal who is helping me file. There is no punchline. I just can't help but laugh at this weird comedy sketch I've been thrust into.

Just bought myself a new pair of headphones which have a weird fault. In the left ear it’s saying “chicken and mushroom” and in the other ear it keeps repeating “steak and onion.” That’ll be the last time I buy anything from Pioneer.

I remember my first crush. Dora the Explorer. That was a weird sophomore year.

My boyfriend locks the door to the room and stays up playing Minecraft all night and its weird He says things like "oh yeah, deeper, deeper." And "oh, it's gonna blow!"

I mean, I like digging and hate creepers too but sheesh.

My dishwasher is acting weird Its chopping vegetables too

My friend Colin had this weird addiction. He'd take heroin whenever people didn't refer to him as a woman. ##

You know those weird cat-dog things in Undertale?... I could never understand tem

Its weird how Ireland is just one sea away from Iceland

A teacher asked me why my daughter's name was so weird... She asked why I had spelled it like E.M.M.A instead of just Emma, and I said that it describes the phrase that I told people when I let them know my SO was pregnant,

A friend of me recieved a lot of weird requests after he made a profile on a dating website. In the "Me in one sentence" category he wanted to express his love for 90s music so he wrote: I'm a scat man!

Penn State has missed two extra points today which is weird because they are usually pretty consistent about doing the little things.