What do Kermit the Frog and Henry the Eighth have in common? They share the same middle name.

A little girl asks her grandad... "Would you make a frog noise for me?"
The grandad, confused asks, "why?"
The little girl replies, "dad says when you croak we are all going to disneyland".

Boy: Grandpa! Grandpa! Make a noise like a frog! Grandpa: Why would I do that?
Boy: I heard mum telling dad, "We'll move to a bigger house once your father croaks." 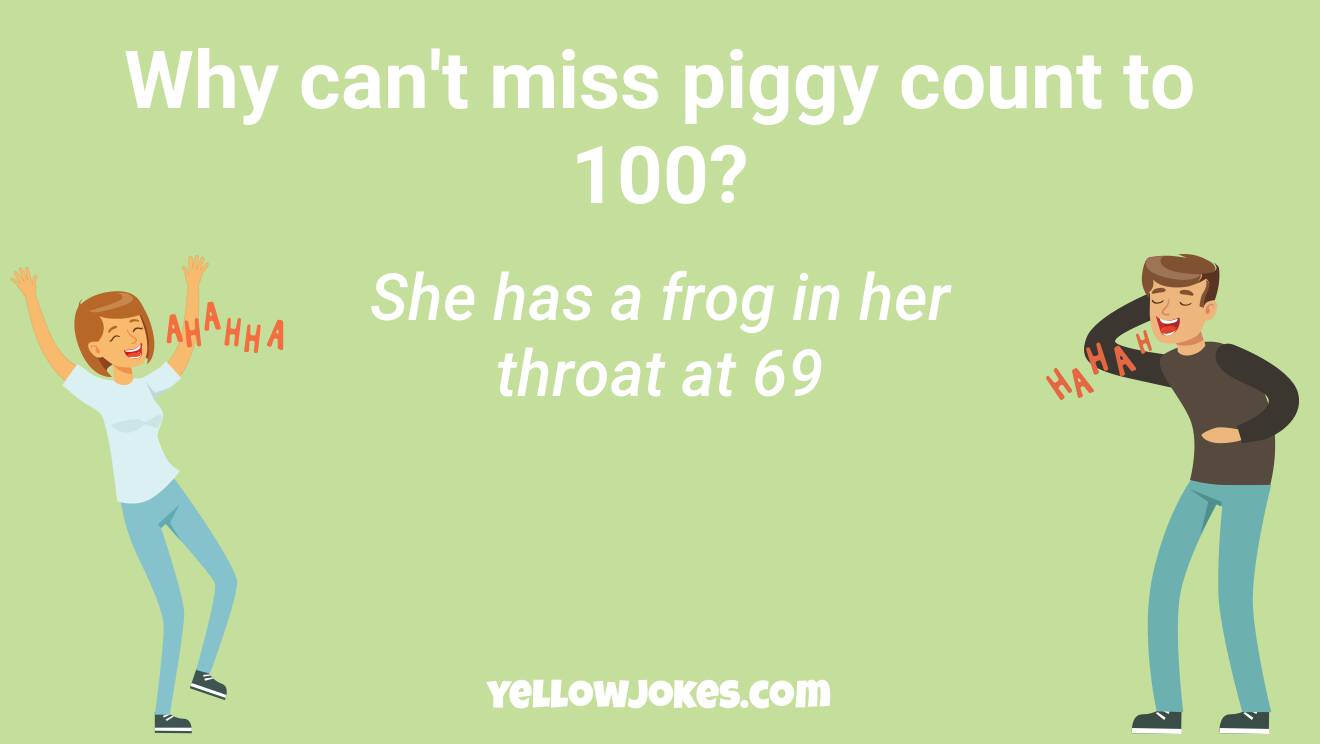 A frog decided to trace his genealogy one day... He discovered he was a tad Polish.

A little boy asks grandpa to make a noise like a frog. Grandpa asks why? Because mummy said the moment you croak is when we're all going to Disneyland!

Why, asks the granddad confused.

Some species of frog can jump higher than a 3-story office building. It's because of their immensely powerful hind legs, and the fact that office buildings cannot jump.

Why can't Miss Piggy count to 70? Because every time she gets to 69 she gets a little frog stuck in her throat.

Why cant Miss Piggy count to 100? Every time she gets to 69 she has a frog in her throat.

What do Kermit the Frog and Henry the VIII have in common? Same middle name.

Why can’t miss piggy count to 100? Because when she reaches 69 she gets a frog in her throat.

Scientists tested a frog. They cut off its legs and said "jump!"

Scientists therefore concluded that when frogs lose their legs, they become deaf.

Some species of frog can jump higher than three-story office buildings. It's because of their immensely powerful hind legs, and the fact that office buildings cannot jump.

Little girl: "Grandma, make a noise like a frog." Grandma: "Why?" Little girl: "Cause daddy says we'll make a lot of money when you croak."

What does a perverted frog say? Rub it, rub it

Why can't Miss Piggy count to 70? When she gets to 69 she gets a frog in her throat.

What does a perverted frog say ? Rubbit

What did Kermit the Frog say when Jim Henson died? ...nothing.

A frog telephones a psychic hotline and is told, "You are going to meet a beautiful young girl who will want to know everything about you."

Whats green and wet and smells like bacon? kermit the frog's finger

What happened to the frog who parked illegally? he got toad

Sesame Street never allowed Mrs. Piggy to count to 100. Everytime she made it to 69, she got a frog in her throat.

What did Kermit the Frog say after Jim Henson died? Nothing.

Why cant miss piggy count to 70? Because when she gets to 69 she gets a frog in her throat.

What do Kermit the frog and Henry the 8th have in common? The same middle name.

What do Harry Potter and Kermit the frog have in common? Hogwarts

What happened to the frog that parked illegally? He got Toad.

What happens when a frog parks illegally? He gets Toad

What did the perverted frog say? Rubbit.

Whats does dissecting a frog and explaining a joke have in common? Sure, you know how it works, but now it's dead.

A rabbi walks into a bar with a frog on one shoulder ... The bartender says, "Hey, where'd you get that?" And the frog says, "Brooklyn, der's hundreds of um."

So, the baby frog finally got his Ancestry.com results in... It turns out he is a tad Polish.

Why was the frog taking the bus? Because his car got toad.

What do you get if you cross a frog with a rabbit? A bunny ribbit

What does a frog wear on it’s feet? Open toad shoes

What does a wet frog say? Drippit.

My son's pet frog broke his leg yesterday He was very unhoppy...

What did Kermit the Frog say at his puppeteer’s funeral? Nothing

A young frog took one of those DNA ancestry tests. Turns out he's mostly German and a tadpole.

What does a frog with sweet tooth eat for lunch? Moskittles.

What is a common thing between Alexander the Great and Kermit the frog? Their middle name

He said that he wants a good job, a large vehicle, and many girls.

He now drives a Bus for a girls school.

Surely it can't be a coincidence that Kermit the Frog and Alexander the Great share the same middle name... Hmmmm

There's a Frog in Alaska that freezes during the winter. While entering this state, it stops breathing, its heart stops beating, it's palms are sweaty, knees weak, arms are heavy, there's vomit on its sweater already.

What is long, green and smells of pork? Kermit The Frog´s finger

What does a frog do when he's bored? rrrrrrrrreddit

Did you hear about the frog that serenade's his fiancee? Yeah. He ribbits for her pleasure.

Two scientists cut the legs off of a frog They tell the frog to jump. The frog does not jump, to which they then conclude that if you cut off a frog's legs the frog becomes deaf.

What do you call a frog making leaps and bounds? Frogress

(just made this up)

A man walks into a bar with a frog on his head... The bartender asks, "Where'd you get that thing?"
Suddenly, the frog replies, "Boston, they're all over the place!"

What do you call an amphibian who catches criminals? Frog the Bounty Hunter

What do you call a frog that gives permission ? Permit The Frog

How do you call a frog that spends a lot of time on the internet? Rrrrreddit

What's red and green and goes 50 miles an hour? A frog in a blender.

Frog's Car!!! What happens to a frog's car when it breaks down?
It gets toad away.

Did you hear about the frog who got his legs cut of? He was Un-Hoppy

Frog noise Little boy said to his grandad one day, grandad, can you make a noise like a frog? Grandad replies, no why? oh, it's just dad says when you croak we are going to Disney land.

How deep is a frog pond? Knee deep

What's green and gets red by the press of a button? A frog inside a mixer

Did you hear about the frog that traced his lineage back to Warsaw? He was a tad polish.

What happened to the frog who parked after hours? He got toad away

Time flies when your having fun. Unless, of course, you're a frog. In that case, a fun time is when you're having flies.

What do you call a frog that likes beans? An amphibean

What's green and says "I'm a frog"? A talking frog.

What do you call a frog that jumps closer and closer to a pond, but never jumps in? An asymptoad.

Never perform an organ transplant on a frog. It's very disheartening and they usually croak.

How does a frog kill himself? He Kermits suicide.

What did one frog say to the other? Time is fun when you are having flies.

Frog mobile What do you call an illegally parked frog? Toad.

miss piggy What do you get when you cross a frog and a pig? A lifetime ban from the Muppet Show studio.

What do you call a drug addict frog? Methamphibian

When a frog parks illegaly, They get toad.

What happens when a frog parks illegally? It gets toad.

What do you call and illegally parked frog? Toad.

Yesterday I saved a frog... ...from drowning. When I got it out it looked so ungrateful.

What did the frog say about the opera? "It was ribbitting."


Thanks for your time. I know. This one made everyone I know groan, and I wanted to share.

My frog went to prison the other day... He kermitted a serious crime!

Why did Miss Piggy call in sick to work? She had a frog in her throat.

What happens to a frog's car when it break down? It gets toad away

A professor once said, "A joke is like a frog.... You can dissect it as much as you want to understand it, but it dies in the process."

What do you call a frog that can only jump 1/2 of it's last jump? An asymptoad

Ever heard of the skateboarding frog? He really did rip it a lot.

A joke is a lot like a frog. If you kill one, its really messy and sad.

What happened to the frog when he parked in the wrong parking spot? He got toad

What happened to the frog parked in a handicap spot? He go toad.

What do you call a frog with no legs? Hopless

How do you get a frog out of a paper bag? Ripit

Sir, your frog is illegally parked, move it imediately or it will be toad.

Having to explain a joke is like dissecting a frog Sure, everyone will understand it a bit better; but the frogs never quiet the same.

What name do you give to a frog? (croaky voice) ROBBERT