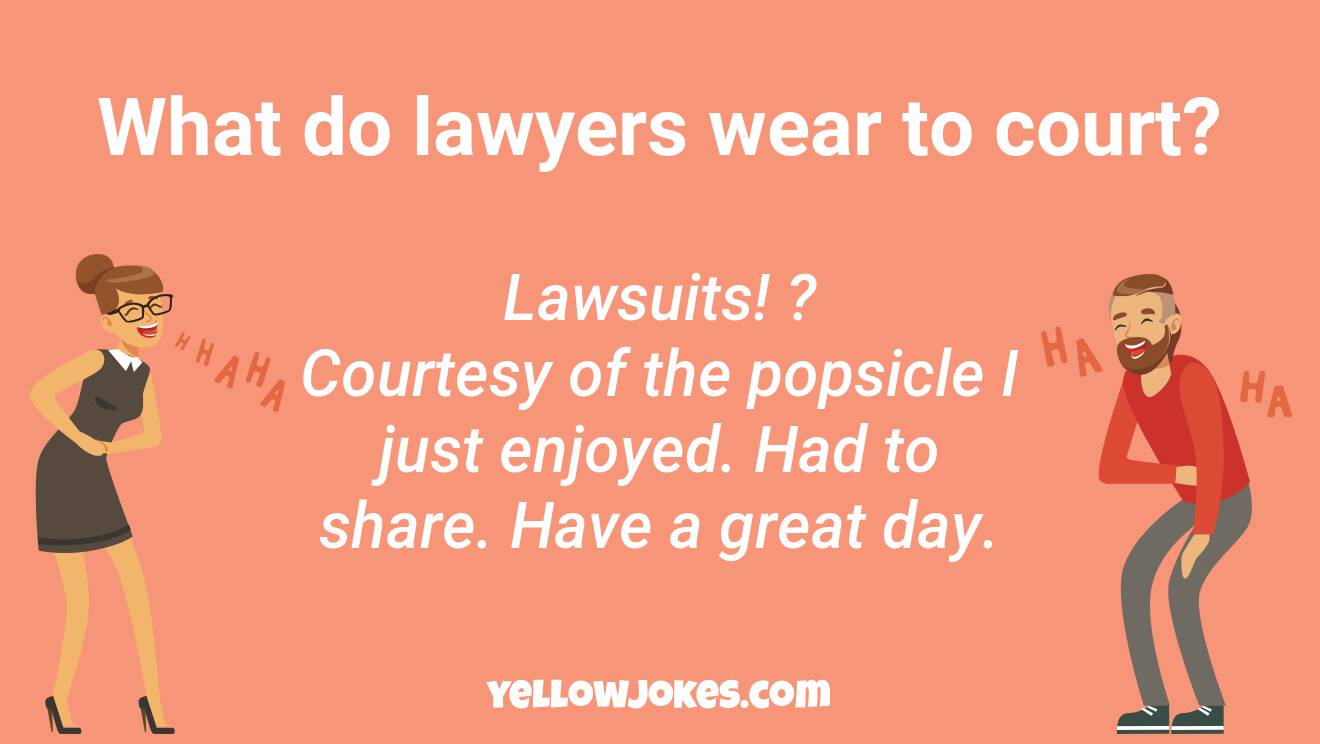 What subject did Dracula major in during college? AcCOUNTing

This joke must be on a popsicle stick somewhere.

What kind of tree would have the best bark? Dogwood.

Don't you dare judge me, it was on my popsicle stick. :P

What do you call a fruit that makes fun of someone? A banana-nana-nana

Got it on a popsicle stick. Laughed for way too long.

What do computers eat for snacks? Micro-chips


(Discovered on a Firecracker Popsicle stick)

How do you comb a bee's hair? With a honeycomb!


I'm sorry I found this joke on a popsicle stick please forgive me.

What does a popsicle become when it melts? Sticky.

What did the hunter call his wife? Deer


Found this on popsicle stick so don’t judge to harshly

What is the best joke you have heard that was on the end of a Popsicle stick? Here is mine: Q: Where do snowmen dance?


A: At the snowball.

Best joke at the end of a Popsicle stick

Atrocious popsicle joke #2 What do lawyers wear to court? Lawsuits!

Atrocious Popsicle Joke #4 Why are cornfields the best listeners?
They're all ears!

I tried to make a popsicle out of frozen sperm. I didn't succeed

This year for Halloween I am dressing up as the guy selling Mexican ice cream from a cart. Then I am going to ask every woman at the bar I see if she wants to blow this popsicle stand.

A man gives a pile of popsicle sticks to his artist girlfriend She replies “ this is the best experience I have with you giving me wood!”

A teacher poses a question to her 1st grade students

She asks the students "If there are three birds all sitting on a fence and you shoot one of the birds off, how many birds are left sitting on the fence?"

Little Johnny immediately raises his hand and says "well there would be no birds left sitting on the fence because you shot one bird off and the sound of the gunshot would scare the other two birds away."

Taken aback the teacher says, "actually little Johnny this is a math problem, if there are three birds perched on a fence and you shoot one of the three birds off there would be only two birds left, 3-1=2, but hey *I like the way you think*."

Little Johnny looks puzzled and raises his hand again. The teacher, becoming a little aggravated by Johnny's questioning says "yes little Johnny, what is it?"

The teacher thinks about it for a minute and she responds "well I would have to think that the woman who is sucking on her popsicle is definitely the one who is married." To which little Johnny replies "actually it is the woman who is wearing the wedding ring, but hey *I like the way you think*."
Share:

A guy (MAN A) walks into a diner, sits down, and pulls a thermos from his backpack. Across the room, a man at the counter, (MAN B) noticed the man.

MAN A: "It's called a thermos, it keeps hot stuff hot, and cold stuff cold!"

The next day, the same to men, (A and B) walk into the same diner.

MAN B: "Hey look! I picked me up one of those thermos things!"

MAN A: "Great! What did you bring for lunch?"

MAN B: "2 hotdogs and a popsicle for dessert!"
Share:

A man walks into a grocery store.

A man walks into a grocery store. After getting all his groceries, he sees something interesting at the check-out counter. Not knowing what it is, he asks a worker. The worker replies, “Why, that’s a thermos! It keeps your hot stuff hot, and your cold stuff cold!” Intrigued, the man decides to buy it. He picks out a lovely blue one and plops it down on the check-out conveyer belt. The worker assured him that he will like his purchase, and the man agrees. After all, he often has hot stuff he would like to keep hot and cold stuff he would like to stay cold, who doesn’t? The man promptly leaves the grocery store, and the worker forgets all about the experience. He knew it was a great thermos and was sure the man would enjoy it. However, a few days later the same man storms in. He looks extremely angry and demands to see the worker who sold him the thermos. Upon seeing the worker, the man opens his thermos and flings its contents at him. The worker, now sticky and covered with popsicle sticks, is very confused. He asks the man, “What is this about? Why did you do that?” The man replies, “You lied about the thermos! It doesn’t work at all!” The worker, knowing that the thermos does work and is extremely high quality, asks, “What do you mean? How did it not work?” The man replies, “Well you said that it keeps the hot stuff hot and the cold stuff cold, right? Well then explain to me why when I got to work my coffee was lukewarm and my ice cream bars were gone!”

My Pakistani uncle told me this joke and it made me laugh. Hopefully you guys can get a kick out of it as well.
Share:

An old joke ..hope you guys enjoy it..

A really hot and young lady was sitting on a park bench and sucking on a popsicle cooling off the summer heat. A young man sitting next to her is staring in amazement at the young woman sucking on the popsicle. Getting annoyed at the young man's gaze, the woman asked him what he was staring at. He just said..'i dont want to ask because i doubt you will misunderstand.'
She just ignored him but he continued to gaze at her licking the popsicle. Getting irritated, she asked him again and said she wont misunderstand .
To which he replied ' I really hope you dont misunderstand , but can i have a lick?
She looked at him for a few secs and extended the popsicle and said .here you go..
to which he replied..' i told you that you would misunderstand!'
Share:

Buttermilk pancakes and an orange Popsicle

There once was a man who loved trains more than anything else in the world. Ever since he was a boy, he would play with his toy trains and dream of driving trains for a real train company.

So, when he turned 18, he packed his bags and waved goodbye to his family. He headed out the door and walked all the way to the local train driver's school, where all the best train drivers learned their craft.

He spent four years in the school, learning all the secrets of operating trains. He'd spend late nights studying how to accelerate and honk the horn. He was going to be the best train driver in the history of trains.

So, when he got his diploma of train driving, he rushed straight to the nearest railroad company. When they saw his credential, he was hired instantly. And so his train driving career had begun.

His first day of the job, he was driving a wonderful train down the tracks. All of a sudden, he saw a young woman standing on the tracks! He slammed his foot down on the brakes, hoping to stop the train before it hit the poor lady. Sadly, he was too slow. The woman was killed by the train.

Now, in his hometown, killing anyone with a train is illegal, even by accident. And so the man was sentenced to death by electric chair. As he sat in death row, the warden approached him and asked what he'd like his last meal to be.

His request was quite odd, it turned out, as he asked for buttermilk pancakes and an orange Popsicle. The warden, however, obliged the man's odd request and got him his last meal. The man ate his meal in silence, knowing his time on the earth was almost gone.

The next morning, he was woken and taken to the electric chair. He was strapped in by the warden, who then walked over to the switch. The prison warden pulled down the switch, but nothing happened. The man was unharmed!

Now, in the man's hometown, you're free to go if the electric chair fails to kill you, so the man was relieved of all charges. He went home, a bit shaken up mentally, but physically unharmed.

The next day, he returned to his train driving job and started operating the train. He was driving along, not a care in the world, when he saw another young lady on the tracks. Alarmed, he slammed on the brakes, but was too slow. Another woman was dead, due to his train.


And so he found himself again on death row. The warden came by and inquired what he would like for his last meal. The answer was the same. Buttermilk pancakes and an orange Popsicle.

He awoke the next morning in his cell, and was taken to the electric chair. The warden pulled the switch, but nothing happened! He was again free to go home.

And so, once again, he returned to his job the next day. He drove his train for quite some time, without any problems, when he saw yet another young lady on the tracks. He pulled the emergency brake, hoping to save the woman's life, but he was too slow. She, unfortunately, was hit by the train.

The next morning, he was taken to the electric chair. The warden strapped him and and prepared to pull the switch. The man sat tensed, not sure what was about to happen. However, when the switch was pulled, nothing happened.

The man sat in the seat for a minute, thinking to himself. Finally, he spoke up.

"After being in this chair three times, I've come to realize something. I guess I'm just not a good conductor."
Share:

A man is playing golf one day...

And while he’s at a hole he hears “fooooorrrrr” before he’s smacked in the “business” with an errant golf ball.

He heads to the doctors and asks “how can you help me doc, My fiance and I have been saving ourselves for marriage and the wedding is 2 weeks out.”

“Hmmm. Typically your problem would need a procedure that would take about 3 months of prep and recovery but this should do the trick.” The doctor said as he started working on the man.

So the doctor takes some popsicle sticks and covers the mans junk up in a sort of makeshift splint. “Leave this on until your wedding night and you should have no problems performing.”

The wedding night comes around and ends and as the couple is in their honeymoon suite the wifes displays herself to him and says “I’ve never let a man touch my body let alone see it.”

“Well honey neither have i and to prove it”, the man says as he undresses “see its still in the case.”
Share: