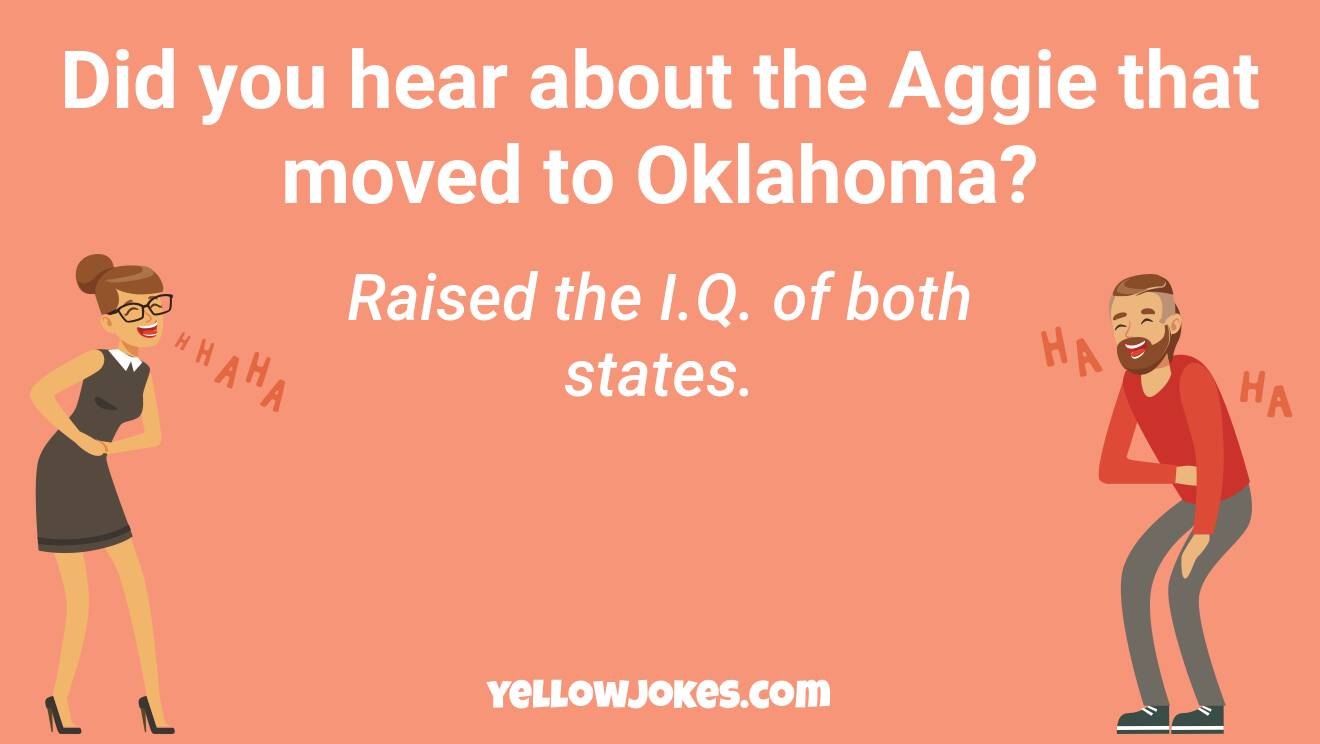 I met a Texas Aggie the other day that had ridden a stick horse all the way up to Indiana. "That must've been a long journey, " I said to him.

"You're telling me," he answered, "it feels like I walked all the way."

A Texas A&M (Aggie) grad, a Texas Tech (TT) grad and a University of Texas (UT) grad end up at the urinals in a bar.

The Aggie finishes first, walks over to the sink and loudly proclaims "In my health class at Texas A&M we were taught to wash our hands after using the bathroom to prevent disease" and proceeds to splash soap and water everywhere. Additionally, while drying off he uses more paper towels than are necessary.

The TT grad finishes next, walks over to the sink and loudly proclaims that "While at TT in addition to learning the value of washing our hands in our health class I took an environmental class and learned the importance of taking care of the environment " and proceeds to use the minimum water and paper towels needed for the job.

When the UT grad finishes he mumbles under his breath "I learned not to piss on my hands in kindergarden" and walks out the door.
Share:

Two Aggies had bagged a deer and were dragging it by the rear legs back to the truck. But the antlers kept getting stuck in the mud. One says to the other, "This is tough but we only got about 1 mile left to reach the truck."

A third hunter saw their dilemma and told them, "If you drag the deer the other way, the antlers won't stick in the mud."

So the Aggies give it try and it works! The first Aggie says, "That hunter was right! This way is a lot easier."

The second Aggie says, "Sure was, but now we're two miles from the truck."
Share:

After years of research and tinkering, the old Aggie professor finally finished his time machine.

"What are you going to do first, prof?" asked his student.

So he gets in the machine, turns it on, there's a loud whirring noise, some smoke, and finally a burst of light. The professor looks disheveled.

"Well, it wasn't easy, but I found that sonofabitch Hitler hiding out in a bunker, so I shot him in the head, and made it look like a suicide!"
Share:

I posted these Aggie jokes elsewhere, so someone is bound to post them here.

These are jokes commonly told around the University of Texas about their rivals at Texas A&M University.

You know why the Aggies don't have ice cubes in the dorm any more? It's because the guy with the recipe graduated.

I've heard that recipe calls for a heaping tablespoon of water.

How many Aggies does it take to eat an armadillo?

Three. One to eat it, and two to watch for traffic.

Two Aggies went ice fishing, but it was kind of a bust. Spent all weekend just clearing enough ice to get the boat in the water.

Since ice fishing wasn't working out, they went hunting, and promptly got lost. One of them says, "WAIT, I heard that if you fire a shot off into the air, someone will hear and come find you." So they tried that. And tried it again later. Eventually the other one says, "I'm not sure about this. I'm running out of arrows."

Eventually, one of the aggies got the idea that he could just use a map and a compass to find their way out. His friend says, "Wait, you've had that the whole time?" So he sat down on the ground and studied the map for a solid 15 minutes, studied the compass and then studied the map some more. Finally, he jumped up and shouted, "GOT IT!" His friend said, "GREAT! Where are we?" He said, "See that tall tree sticking up from the top of that hill?" His friend said, "I sure do!" And he replied, "We're at the top of it!"

Fortunately, our two Aggies eventually stumbled across some tracks, and since they were getting awful hungry, they followed them hoping to find some food. Sadly, the train killed them.
Share: