What's the difference between a deaf person and an Italian? One talks with their hands and makes goofy noises at random volumes, and the other can't hear.

Mickey Mouse gets a call from his lawyer. The lawyer tells him "Mickey I'm sorry, but you can't divorce Minnie just because she's crazy"

Mickey says "I didn't say she was crazy, I said she was f**king Goofy"

Goofy tripped over a stone and got hurt Mickey Mouse : Hey Goofy ! Are you okay?

Mickey Mouse : Oh No ! Which knee?

Goofy(pointing to his leg) : Disney

But then they played “Come On Eileen”

Whenever my boss asks, "Having fun yet?" I say, "Are you kidding, this is my Disneyland!"

because my boss is a rat, my co-workers are goofy and this is a Mickey Mouse operation. 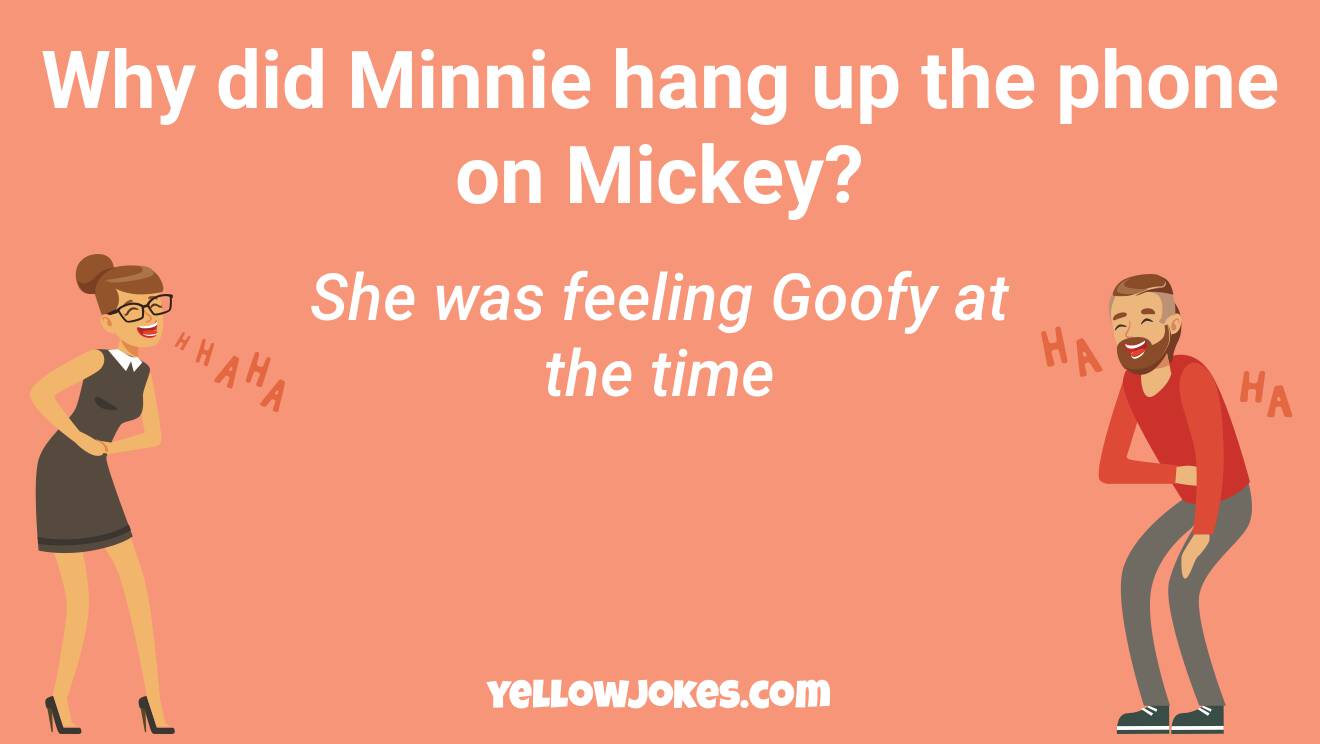 Mickey mouse is getting a divorce Mickey mouse goes to a lawyer and says he wants a divorce. Lawyer says "unfortunately you can't divorce your wife cause she is crazy" Mickey says "I didn't say she was crazy, I said she was f**king Goofy"

What did Mickey Mouse say to Trump when Goofy threw a shoe at him? DONALD DUCK !!!

What's the difference between a deaf person and an Italian? One talks with his hands and makes goofy noises, and the other one can't hear.

Why does Mickey always pick Donald over Goofy? Because Donald Trumps him.

Mickey Mouse goes to divorce court to divorce Minnie... The Judge says "so you want to Divorce your wife because she's crazy?"
Mickey replies "No, what I said was She's F&#@ing Goofy."

Why did Mickey scare Goofy? To help him get rid of his hyuck-ups.

You probably think that Goofy is a nice guy, and he really is. But just don't mess with his friends or he will hyuck you up.

If Goofy was a country singer, what would his name be? Gawrsh Brooks

what do you call a goofy yak that's allergic to gluten? celiac silly yak

I auditioned for the role of Mickey Mouse but I didn't get the part. The director said I was too Goofy

Why did Donald Trump cross the road? To get to the other side of Chris Christie.


From the book:
Donald Trump Is F**king Goofy: Jokes and Limericks

Why was Mickey Mouse so upset that Goofy's name was written in the snow? It was done in Minnie's handwriting.