[first day as a pilot] me: *(looking down nervously)* what are all these buttons for

co-pilot: they keep your shirt closed

I asked my dad why did he become a pilot. He said, "to conquer my greatest fear." "The fear of flying?", I asked. 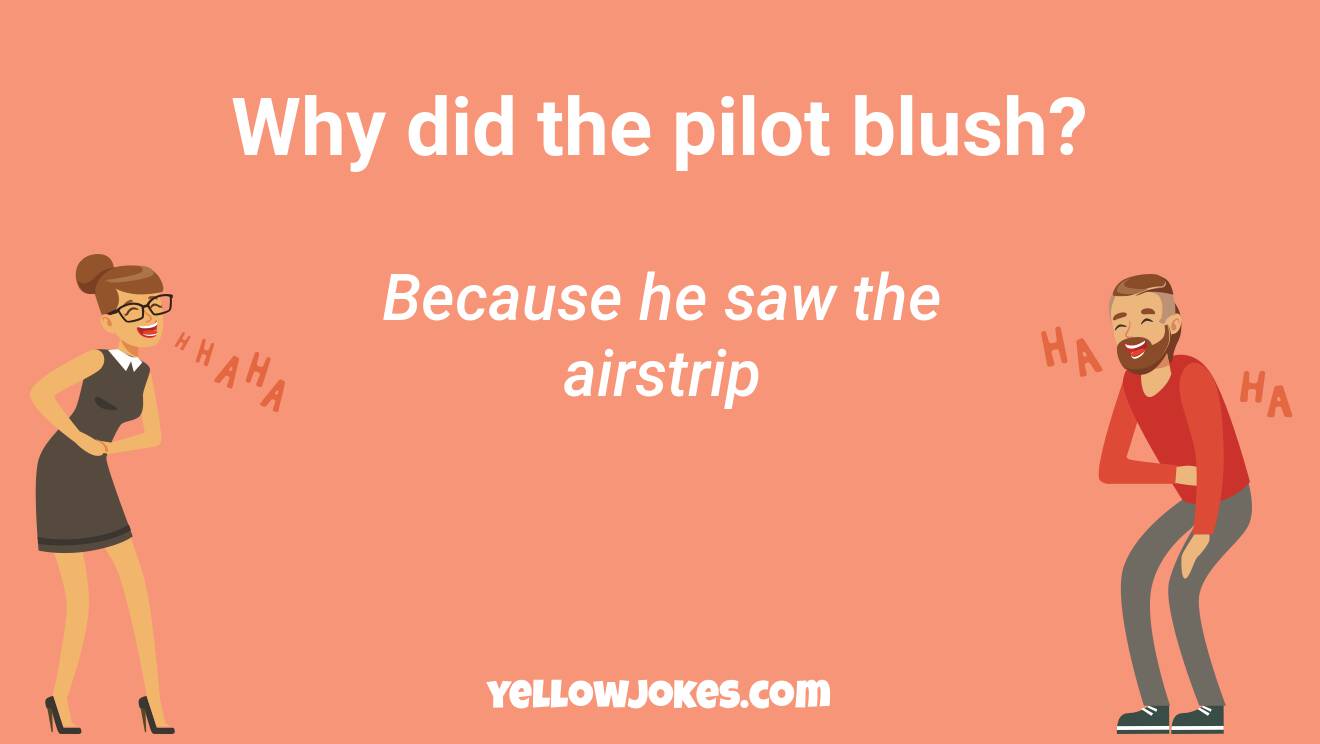 Propellers on small planes are actually used to keep the pilot cool. When it stops spinning, you can see the pilot start to sweat.

Did you know that an airplane's propeller is only a big fan and is there to keep the pilot cool? Don't believe me?

Turn it off, and see how much the pilot sweats!

People always say the show Lost had such a great pilot Then why did the plane crash?

A propeller is actually just a big fan to keep the pilot cool... when it stops you can watch the pilot start sweating

What did the kamikaze pilot tell his students? Watch closely. I'm only gonna show this once

"What do you wish to do in the future?" asks the teacher. Pete: "I want to be a pilot"

Tommy: "I want to be a doctor"

Margaret: "I want to be a good mother"

Frank: "I want to help Margaret"

So I'm making a TV series about a plane hijacking.. We've just shot the pilot.

Pilot: all of us will one day, no one knows when!

Pilot: but it'll probably be when we hit this mountain!!

Today was my first day as a pilot I looked down nervously.

"What are all these buttons for?" I asked.

"Those are to keep your shirt closed"

What did the Kamikaze pilot say to his students? Pay attention, I am only going to do this once.

The last thing you want on a flight is to be woken by a panicking stewardess. Particularly if, like me, you're the pilot.

Amber: "I want to be a teacher"

Stacy: "I want to be a good mother"

James: "I want to help Stacy to be a mother"

A captain was flying over a mental hospital... ...when suddenly he started laughing vigorously.

"What's so funny?" Asked the co-pilot.

The captain answered: "I'm just imagining their faces when they realize I'm not there anymore"

Why did the sitcom about airplanes never take off? Because the pilot was terrible.

As an aspiring actor, I was somewhat surprised when I got detained by airport security today... All I said was that I was in town to shoot a pilot...

What's the difference between a Pakistani grade school and an Al-Qaeda training base? How am I supposed to know, I just pilot the drone

What do you call a pregnant flight attendant? Pilot Error.

What do you call a Muslim Flying an airplane A pilot

Nobody wants to die alone. That's why I'm training for my pilot's license.

NBC is contemplating a new TV series titled "Airline Tragedies." They are putting the pilot together right now.

I was woken on the plane by a panicky stewardess That’s how i lost my job as a pilot.

What's the difference between a terrorist and a five year old? I don't know, I just pilot the drone

A plane flies straight toward a mountain as pilot and co-pilot pull down on the control wheel with all their might The pilot yells "We'll never make it over that mountain" the co-pilot looks at him and says "Not with that altitude."

The propellor of a plane is actually a giant fan for the pilot When the fan stops, you can actually see the pilot start sweating

What do you call a blind suicide pilot? Kamicantsee

A pilot passed through a rainbow on his flight test. He passed with flying colors.

Did you hear about the manned rocket that crashed shortly after launching from Alabama? All the system warnings went off, but for some reason the pilot could not abort.

How do you tell if someones a pilot? Don't worry they'll tell you

I got dismissed from my job as a pilot. They told me I had an altitude problem.

They are putting the pilot together as I write this.

What's the difference between an ISIS compound full of terrorists and a grade school full of children? I don't know, I'm just the pilot

First day as pilot... Me: (Looking down nervously) "What are these buttons for?"

I’ve been thinking about a career as a airline pilot I’ve been told it can be quite grounding.

Why did the pilot get sick? Because he flu

Donald Trump, the Pope, the oldest man in the world and a 10 year old are all on a plane when it is about to crash. Donald Trump reaches for the boys backpack when the German Pilot regained control of the plane and says ‘no jokes’

Did you hear about the 747 pilot who lost internet mid-flight? He started experiencing jet lag.

What do you call a black person piloting an airplane? A pilot!

What, you thought I was gonna say something else? You dumb racist.

Interviewer: So, why do you want to be a pilot Me: Because I have a fear that I will die alone

I hate when people creat humor from 9/11 My father died on that day. He was the best pilot in Saudi Arabia.

Lame joke: What is a pilot’s favorite type of bagel? Plain

My grandfather was an airplane pilot I hope when I die I die peacefully in my sleep like my grandfather did and not screaming like his 420 passengers.

I use to work at a bakery as a pilot I would make the dough over here and pilot over there.

Why did the homeless airline pilot land in a furniture store? He wanted to crash on their couch.

Why was a Turkish plane trying to bomb Greece? It was on otto pilot.

What's the difference between a Syrian preschool and a weapons factory? I don't know, I just pilot the drone.

What do you call an Arab man flying a plane? A pilot you rascist.

What did the pilot, say after his 20th day of rehab? I feel the need, the need for speed

When under stress, you have to choose between the fight or the flight response. Unless... you're a fighter pilot...then you can do both.

The ace fighter pilot Robin olds and super man got into an arm restling competition. The loser had to wear underwear on the outside for the rest of their life.

How can you tell if there is a pilot at a party? He’ll tell you soon enough.

After the helicopter crash, the blond pilot was asked what happened. She replied, "It was getting chilly in there, so I turned the fan off."

I decided to leave work an hour early today. You should have seen the look on the co-pilot's face when I grabbed that parachute.

My grand-dad died in 9/11 He was the best pilot in Saudi-Arabia.

Did you hear about the pilot that got sick? He was diagnosed with a terminal illness.

Did you hear there's a pilot who only gives plane rides to mentally challenged kids?? What goes up must have downs

I wanted to become an airline pilot, but do you want to know what I became? HIV positive

What do you call a muslim flying a plane? A pilot, you islamophobe

Why did Prince Wlliam want to become a pilot? Because he was the 101st heir born.

Roses are red Violets are violet

This makes no sense

What do you call a pilot from the Netherlands? The flying Dutchman

Why was the American pilot denied Ace status after shooting down five A6M5's? Because he had Zero kills.

When my father was younger, he wanted to be a pilot too bad his dream never got off the ground,

Why did no one recognize the airline pilot? Because he was the master of disguise.

Why was Peter Pan fired from his job as a pilot? He could neverland

What was the worst thing about finally getting my pilot googles at the end of pilot training? Emperor Hirohito handed them to me...

I reported my great grandfather to the ASPCA! He told me that during his years as a pilot in WWII, he was involved in what he called "dogfighting". How cruel can you be?!

What do you call a black guy flying a plane? A pilot. What are you racist?!

What is the difference between a rebel base and a Pakistan school? I don't know I'm just a drone pilot

A plane crashed on the border of two countries, and everyone dies except the pilot. Where you do you bury the survivors? Six feet under a cesspit, till you can no longer hear his screams.

Why didn't the oven get its TV show green lit? Because the pilot light was out.

What did the pilot say to the Vietnamese mechanic underneath the plane? " "You are the Nguyen beneath my wings"

Why was the pilot flying circles over South Korea? He was Seoul searching.

What do you call a Mexican pilot in the Rebel Alliance? Rogue Juan

THe newiest Knock Knock joke I heard. - Knock Knock
- Who's there?
- First pilot.

hopefully not too soon

So my friend really liked that show, Lost... But he said the pilot sucked.